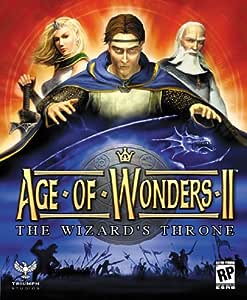 This software is BRAND NEW. Packaging may differ slightly from the stock photo above. Please click on our logo above to see over 15,000 titles in stock.

4.3 out of 5 stars
4.3 out of 5
8 customer ratings
How does Amazon calculate star ratings?
Amazon calculates a product’s star ratings using a machine learned model instead of a raw data average. The machine learned model takes into account factors including: the age of a review, helpfulness votes by customers and whether the reviews are from verified purchases.
Top reviews

bayou_hannibal
5.0 out of 5 stars The addictive turn-based game that you have been looking for
Reviewed in Canada on July 2, 2003
There aren't enough good turn-based games out there, but there is at least one that is superior: "Age of Wonders 2". I found this game to be as challenging, enjoyable, and addictive as my favorite turn-based games of all time: "Civilization" and "Colonization". It has the perfect blend of economics, empire-building, advancement, and fighting that you need to make a great game.
Most strategy games of this type don't offer much in the way of tactics. Battles are usually somewhat simple affairs that you don't have much control over. One of the special features that AoW2 has is that you get to play out battles on the battlefield. When a big army of yours tries to capture a city, for example, the view switches to a blow-up of the city, and you command your units one-by-one. The battles are a lot of fun to play out, but you can put them on automatic if you get tired of them. Different units have different strengths and weaknesses, and advantages in certain situations. For instance, when I am attacking an enemy wizard's castle, I have my cannons smash the gate, and then send in the cavalry to race right to the wizard and take him out. Once you figure out how to conduct your units in battle well, you can formulate a high-level strategy for winning them. That is what makes this game such a rare perfect blend of strategy and tactics.
The game is somewhat complicated, but it is not tedious because of it. You can pick up general concepts and strategies and then dig deeper after that. That is why AoW2 is such a perfect mix of complexity and playability. The interface could use more hot keys, but other than that, it is great and it makes the game managable.
The game's fantasy setting is very well done. There are a lot of different races, and although some units are somewhat redundant, every race has at least one or two unique units that make it special. The maps are beautifully decked out in bright colors, and they never get redundant. That is saying a lot, since the single-player campaign has 20 big ones. The wizard portraits look great as well, but the units are kind of small and lacking in detail. The game doesn't look quite as pretty as say,Warcraft 3, but it still looks good.
Diplomacy is a somewhat weak link in "Age of Wonders 2", since most of your missions involve defeating one or more wizards, and diplomacy is almost pointless. That's about the only fault that I find in this outstanding game. If you are like me and you have been searching for that great turn-based strategy game, then look no further. Prepare for some sleep deprivation, and break out the Doritos: you're going to need them.

Amazon Customer
5.0 out of 5 stars This game rocks!
Reviewed in Canada on May 23, 2003
I saw some pretty poor reviews which prompted me to put in my two cents in. Who in the heck wants a random map generator when the game is geared towards PvP. The wealth of strategies available for the different races really brings the game to life. The depth of the AI really hit home after I released the "Fire Domain" spell which harms all enemy units within my territory. The AI counteracted with a force of about 24 Monks (healing each other like mad) and left two cities in their wake. The Scenarios are well thought out and if anything a little unbalanced - leaning more to the extremely challenging side. The beautiful graphics and sound track included are just a bonus!
Read more
One person found this helpful
Helpful
Comment Report abuse

Amazon Customer
5.0 out of 5 stars Great game.
Reviewed in Canada on March 27, 2004
Great strategy games. One of the greastest strategy games ever made. You can choose between classic game play style where 1 person takes a turn at a time or RTS style where its all at once.
Other similar games: Populous, The Settlers Games, The Empire Earth Games, Civilization, Warzone2100, The Nations, and about every other strategy-empire building game out there that there is. I would definitely recommend it to everyone who owns a computer.
Read more
Helpful
Comment Report abuse
See all reviews from Canada

Cookieman
3.0 out of 5 stars Three Stars
Reviewed in the United States on May 31, 2016
Verified Purchase
works
Read more
Helpful
Sending feedback...
Thank you for your feedback.
Sorry, we failed to record your vote. Please try again
Report abuse

Gerald L. Brown
4.0 out of 5 stars Age of Wonders II
Reviewed in the United States on October 28, 2010
Verified Purchase
It was an interesting , & Fun game . Kind of like HOMM , But a little bit better since Ubisoft took over the HOMM series .
Read more
Helpful
Sending feedback...
Thank you for your feedback.
Sorry, we failed to record your vote. Please try again
Report abuse

Joseph
5.0 out of 5 stars AoW2
Reviewed in the United States on August 30, 2013
Verified Purchase
It is pretty old, and doesn't require much processing power, it's also a little complicated and takes a little learning, but it's really fun and it is perfect for playing when you have a broken arm and the cast gets in the way
Read more
Helpful
Sending feedback...
Thank you for your feedback.
Sorry, we failed to record your vote. Please try again
Report abuse