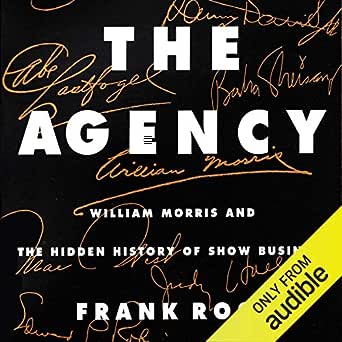 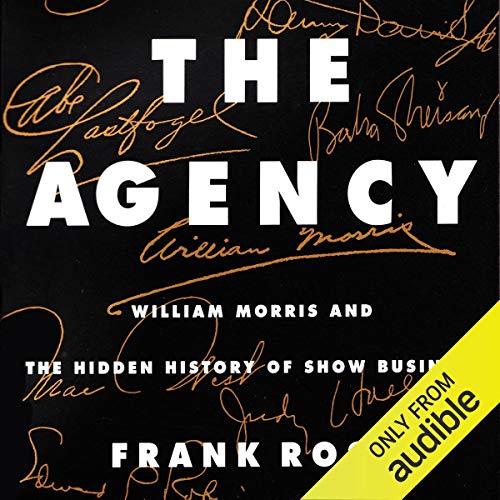 The Agency: William Morris and the Hidden History of Show Business

QUEBEC RESIDENTS:
Check out your offer!

Sold and delivered by Audible, an Amazon company

People who bought this also bought

4.7 out of 5 stars
4.7 out of 5
15 global ratings
How are ratings calculated?
To calculate the overall star rating and percentage breakdown by star, we don’t use a simple average. Instead, our system considers things like how recent a review is and if the reviewer bought the item on Amazon. It also analyzes reviews to verify trustworthiness.
Top reviews

David Rensin
5.0 out of 5 stars Terrrific book
Reviewed in the United States on November 25, 2012
Verified Purchase
Frank Rose's book really delivers a fascinating history of William Morris. It's not about the stars as much as the men (and women) who helped make the stars -- the "star-making machinery" as Joni Mitchell sang in "Free Man in Paris," her ode to David Geffen, himself one of the William Morris men who, incidentally, became a star himself. The Agency is substantial stuff -- and it was a full on inspiration for my own book, The Mailroom, which came later, and covered the Wm Morris Agency in part. Classic stuff, this book.
Read more
4 people found this helpful
Report abuse

Robert L.
5.0 out of 5 stars Show Business History
Reviewed in the United States on September 25, 2018
Verified Purchase
This is the history of show business for the last 100 years. Well presented and well documented you will learn so much about the inter workings of show business plus fascinating history of many show business greats. Examples: Marilyn Monroe was a hooker. Milton Berle was a flasher.
Read more
Report abuse

Chasen Chess
5.0 out of 5 stars A history of the entertainment industry from the WM agency's bird's eye perspective.
Reviewed in the United States on July 6, 2014
Verified Purchase
I worked at the William Morris Agency in Beverly Hills in the early 80's and this is a clear and concise history of WWA over the decades. It's accurate, entertaining and will give the reader a bird's eye view of the whole entertainment industry over the years since it the power broker agents that put all the deals together.
Read more
2 people found this helpful
Report abuse

Anne L. Marshall
4.0 out of 5 stars A back story of Hollywood
Reviewed in the United States on October 17, 2018
Verified Purchase
An interesting account of the Hollywood agents and agencies from the beginning.
Read more
Report abuse

Jordan Ganz
5.0 out of 5 stars Five Stars
Reviewed in the United States on September 16, 2016
Verified Purchase
super good read. Definitely inspiring. Great book for someone interested in the music biz.
Read more
Report abuse
See all reviews
Fast, FREE delivery, video streaming, music, and much more
Prime members enjoy Free Two-Day Shipping, Free Same-Day or One-Day Delivery to select areas, Prime Video, Prime Music, Prime Reading, and more.
> Get started
Back to top
Get to Know Us
Make Money with Us
Amazon Payment Products
Let Us Help You
EnglishChoose a language for shopping. CanadaChoose a country/region for shopping.
© 2008-2020, Amazon.com, Inc. or its affiliates