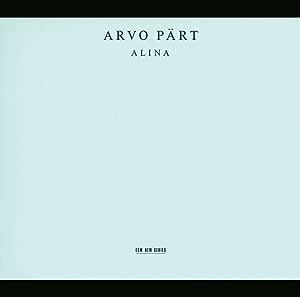 Arvo P rt's Alina follows a simple-enough formula. Two stark instrumental works from the master of holy minimalism repeat each other, each time slightly different. But the blissful results--quiet, haunting, and thoroughly hypnotizing--meld to create one of classical music's best albums of 2000. It's as intense and sublime as contemporary classical music can be.

This is a remarkable release, both for its beauty and its novelty at programming. Für Alina is a two-minute solo piano piece composed by Pärt in l976 that ushered in his "tintinnabuli" style, that is, the bell-like, simple, no-notes-wasted method for which he has become beloved and famous. On this CD, pianist Alexander Malter plays it twice, as the second and fourth tracks; each iteration takes almost 11 minutes (Pärt assumed it would be embellished, and he chose this pair for the CD). There are minute variations in tempo, emphasis, and rubato from one to the other, but, all that being said, it amounts to 22 minutes of the most beautiful, contemplative music ever performed. Almost equally gentle is Spiegel im Spiegel , played as tracks 1, 3 and 5 and scored for piano and, respectively, violin, cello, and then violin again. The notes the instruments mirror one another (Spiegel is German for mirror), with notes added to the scale with each repetition, and so on. Almost impossible to describe in its loveliness, each of the three sets is beautiful; the cello in track 3 gives it extra mellowness. This is music staggering in its simple complexity and a treat for the ear and heart. --Robert Levine

Pages with related products. See and discover other items: arvo part
Fast, FREE delivery, video streaming, music, and much more
Prime members enjoy Free Two-Day Shipping, Free Same-Day or One-Day Delivery to select areas, Prime Video, Prime Music, Prime Reading, and more.
> Get started
Back to top
Get to Know Us
Make Money with Us
Amazon Payment Products
Let Us Help You
EnglishChoose a language for shopping. CanadaChoose a country/region for shopping.
© 2008-2020, Amazon.com, Inc. or its affiliates