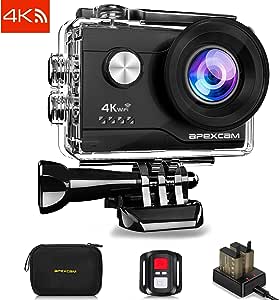 Add to Cart
CDN$ 69.98
And FREE shipping on eligible orders. Details
Sold by: ApexcamStore
Have one to sell?
Sell on Amazon

The camera uses the most advanced technology to provide you with the highest fidelity.Capture the wonderful moments of life for you.

It provides high-definition photos and professional video quality, It's an amazing gift for your friends and family even yourself.

Perfect for outdoor sports and underwater sports like cycling, motorcycling, skiing, diving, surfing, snorkeling and so on.

The camera can connect your mobile phone through WiFi,share your video / photos to social software;support HDMI output, watch beautiful video and pictures on TV.

Continuous photo time: up to 200 minutes

Please format the Micro SD card (not included) in the camera before use,64GB max supported.

After the waterproof shell is used, it should be cleaned and dried in time.

Page 1 of 1 Start overPage 1 of 1
This shopping feature will continue to load items when the Enter key is pressed. In order to navigate out of this carousel, please use your heading shortcut key to navigate to the next or previous heading.
Back
Next
Customer Questions & Answers
See questions and answers

S. K.
TOP 1000 REVIEWER
5.0 out of 5 stars I can not believe how hand it is
Reviewed in Canada on November 17, 2018
Verified Purchase
For this price with easy use and high quality is amazing. I had a bad experience with a camera before so I was a little afraid of being dissappointed again I choose Amazon to buy it because I knew Amazon rocks when something happen to items. But no! This is great. It is light to carry, easy to use and very good case to carry. Thank you amazon and thank you manufacturer and seller. You made me happy.
Read more
214 people found this helpful
Helpful
Comment Report abuse

cdntinpusher
5.0 out of 5 stars Can't beat the value
Reviewed in Canada on April 2, 2019
Verified Purchase
Bought this only because we were going to Hawaii and would be snorkelling and wanted a way to catch the experience without breaking the bank. Figured for $60, what do I have to lose.

Kit came packaged in a nice case, with a ton of accessories, most of which I did not have a use for, so I just kept the one's that seemed most useful and put the rest aside. Came with 2 batteries and a charger. Charge per battery lasts between 1 and 2 hours on video mode, I would guess. Hard to be accurate because I wasn't videoing continually.

Now as to quality. Photo quality is just OK. It won't compete with a high-end smart phone, nor a good compact camera, but if you are just looking to capture memories and not win a photo contest, they will do just fine. I didn't take many photos with it, since I had a phone and a compact camera, mostly took video. As you can see from the photo included, shot in low-light conditions, it did OK, but you will find some fish-eye effect with photos due to the wide-angle lens. It may be possible to correct that with software. What I was really impressed with were the underwater videos. The resolution was excellent and colors vivid. I've attached a screen capture from an underwater video. The colors and detail look way better when cast to my TV than they do on the computer screen. In any event, the waterproof housing did it's job, though I did find some condensation inside after the second dive of the day, but that could easily have been from drops of water falling into the case while changing battery or sim card. In any event it did not affect operation of camera and it still works fine.

The only caveat I have is to read the manual prior to use. I didn't, and didn't realize that the wrist controller is NOT waterproof, just splashproof. Needless to say after diving with it on, it was kaput. My fault, not the device! Also, I had my camera attached to a mount on my snorkel, but I could also have attached it to a headband. Problem with that setup is that you don't really know where the camera is aimed. Next time, I will just get a selfie stick that is waterproof and mount the camera to it and hold it in front of me so I can be sure it is aimed at what I want it to be aimed at. In conclusion, I highly recommend this camera as a cheap alternative to a Go-Pro. Certainly not comparable I'm sure, but then again, neither is the price.

Colleen
4.0 out of 5 stars Pleasantly surprised
Reviewed in Canada on May 12, 2019
Verified Purchase
I purchased this camera when it came up as a daily deal so felt I got it for a good price. I wasn't expecting great things for the price but I'm pleasantly surprised by the product received and the quality of video so far. The product shipped from Amazon and arrived quickly with all accessories as advertised.

I haven't used it much as yet but the few test videos I've done so far have been good quality. I"m impressed with the picture quality, the waterproof case works and the sound is quite good as well.

The included manual is pretty good at explaining how to set the various functions and features but not so much on how to use the included mount accessories. The LIVE DV app for the phone or tablet is okay for remote control but not so much for sharing, can't seem to get it to do that properly.

I purchase a 64GB micro SD card and formatted in the camera as instructed. For some reason I kept getting the error message "Please Format TF card" and it wouldn't record. So I purchased a 32GB card and it works fine. I have an email in to APEXCAM support about the 64GB card and will see what their response is.

I'm not a power user of sports cams so I think this camera is great for beginners or the casual user who doesn't want to put out the big $$$ for the brand name product. Good value for the $.

Vijay Prabhakar
5.0 out of 5 stars Cheap Action Cam that does the job.
Reviewed in Canada on July 8, 2019
Verified Purchase
Great for the price. I have been using it for my motorcycle. I like the timelapse option and the fact that I could easily start and stop recording with a remote in my arm. 4k quality is what I would use. Image stabilization could have been better but no complaints for the price. I don't wanna pay 500$ for a crappy GoPro that doesn't hold charge. This one comes with a lot of utilities and extra battery. I just connected it to my TV to show how good the clarity is for the price.
Read more
86 people found this helpful
Helpful
Comment Report abuse

Sandra
5.0 out of 5 stars Much better than I expected. Amazing really, for the price.
Reviewed in Canada on April 16, 2019
Verified Purchase
I wanted a gopro for a long time but $$$ it's quite a bit of money. I thought I would try out a cheaper version and see how much I use it, and if I would really want a gopro. I tried it out today. It was a dull dreary day and yes I did have a smudge on my lens (I know I should have cleaned it) but look at the picture. Not bad at all. It looks really good on my 46 inch tv. I really don't think I need the gopro as this Apex is not bad at all. I have only tried 1080P at 30 FPS. I like it because if by chance I lost it, I'm only out $70...not the end of the world. I would buy it again. I am giving it 5 stars because of the price for what you're getting.
Read more

Jonathan
TOP 1000 REVIEWER
5.0 out of 5 stars Pretty neat camera :)
Reviewed in Canada on November 11, 2018
Verified Purchase
Got this camera after borrowing the one my friend has and this blows it out of the water. It comes with so many pieces that I never expected. It even has a clicker and also a piece to secure onto a tripod. The picture quality is solid and it’s a nice value buy instead of the “other popular action camera”. Even comes with two batteries and a charger that can charge both batteries at once.
Comes with a waterproof case which is nice for people that like to take it on the road. All and all a very nice surprise, as well as the beautiful zipper case that can store all the accessories and the camera!