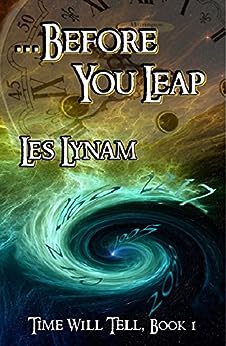 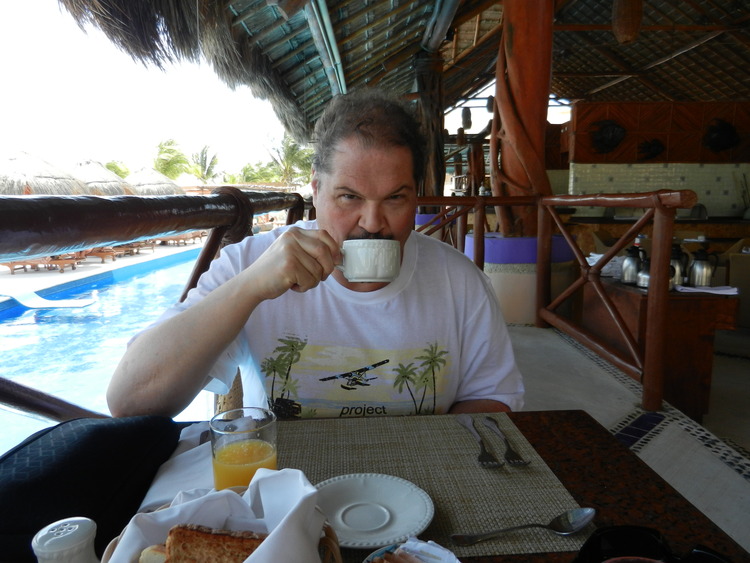 . . . Before You Leap (Time Will Tell Book 1) Kindle Edition

Les Lynam (1954- ) was born in Creston, Iowa, into a farming family which also included an older brother and two older sisters. The family farm was near the tiny community of Corning, Iowa, (birthplace of Johnny Carson). After graduating from Corning High School, he attended Central Missouri State University (renamed University of Central Missouri in 2006), graduating in 1976 with a Bachelor's degree in Mass Communications. After a short, mostly unsuccessful, attempt at running a print shop, he refocused and returned to a life of studies at the University of Missouri. He received an M.A./M.L.S in 1986 and began a new career as a librarian at Ward Edwards / James C. Kirkpatrick libraries at UCM. He took an early retirement on December 31, 2012 to pursue his lifelong dream of writing Science Fiction. His premier novels, "...Before You Leap" and "...Saves Nine", were first published in 2014 with hopes and dreams of many more to come. His favorite sub-genre of Science Fiction is Time-Travel, with Martian Colonies a close second. He has one son and three grandchildren. --This text refers to the paperback edition.

4.3 out of 5 stars
4.3 out of 5
59 global ratings
How are ratings calculated?
To calculate the overall star rating and percentage breakdown by star, we don’t use a simple average. Instead, our system considers things like how recent a review is and if the reviewer bought the item on Amazon. It also analyzes reviews to verify trustworthiness.
Top reviews

Aurora Dawn
5.0 out of 5 stars A Great Little Time Travel Novel
Reviewed in Canada on October 6, 2016
Before You Leap is a lighthearted look back at the 1990s from the point of view of a 23rd century teenage historian who has travelled back in time to observe the social history of the late 20th century by interacting with his 5 times great grandfather while the later was a high school student in a small Missouri town.
Armed with a time machine with a cloaking device and 23rd century tech that provides instantaneous computer database access and allows him to change his appearance, LX joins the high school scene to interact with the 16 year old Sean, playing the roles of both of the female Townsend twins as well as their artist Aunt Katherine.
The book takes a nostalgic look back at the pop-culture of the nineties, teenage crushes and the parent-teen dynamic in modern society. I believe it would appeal to a YA audience who could easily identify with the struggles and missteps of Sean and Alexis/Nicole as they struggle with relationship issues in a world where the teenage social awkwardness is further complicated by the need to untangle the nuances of more than 200 years of cultural change. On the other hand, like the best of the “children’s movies” of recent times, there is a whole other level to this story that could only be fully appreciated by those of us “of a certain age” who experienced the social, political and cultural extravaganza of the 1990s and survived to tell the tale.
I loved Before You Leap and the opportunity it provided to travel back to a time just before 9/11 changed the world forever and I look forward to taking the second voyage that is alluded to but not realized where Alex (LX) to visit Sean’s father in his teenage years during another pivotal moment in modern history at the end of the 1960s.
Read more
One person found this helpful
Helpful
Report abuse
See all reviews

Lorraine
4.0 out of 5 stars well-written and humorous
Reviewed in the United Kingdom on August 19, 2015
Verified Purchase
A well-written and humorous read.
The characters were brilliantly described, completely believable and come alive as you read.
I loved Sean's reaction to the science behind time travel, which was interesting and not overly complicated.
Ther was no great cliffhanger at the end, but it was left open for another book, which I'll be more than happy to read
This book was so much more than a sci-fi/time-travel novel.
Read more
One person found this helpful
Report abuse

UDAYAN CHATTERJEE
4.0 out of 5 stars Excellent read
Reviewed in India on March 16, 2019
Verified Purchase
Mature writing. Unusual plot. Brilliant conversation. Sound science. Wondering if this went through a professional editor, because this is the one weakness in an otherwise impressive first book.
Read more
Report abuse

Phillip T Stephens
4.0 out of 5 stars Gender bending time traveling tale
Reviewed in the United States on August 18, 2016
Verified Purchase
Before you freak out at the headline and associate Before You Leap with transgender hookers trying to use your child's bathroom (alá the movie Tangerine), don't. Think more along the lines of Benny Hill and Monty Python skits—boys pretending to be girls, occassionally pretending to be boys. It doesn't get more Shakespearean.

Lynam targets his book for YA audiences, and while adults will enjoy it, he never loses his sight of his readers, teenage boys. Teenage boys are, without a doubt, an underserved audience, written off by too many as non-readers (or at least "not book readers"). Before You Leap serves that audience well, although adults might find the thread unravels toward the end.

Following a brief (and possibly unneeded) prologue from two hundred years in the future (in which LX becomes the youngest student at the academy to be awarded a history grant), junior Sean Kelly finds himself attracted to Alex, the new female transfer student. Alex is cute but odd, speaks flawless Spanish.

Unfortunately, Alex's odd behavior, and the interference of the class' mean girls assure the Sean never quite takes to Alex. Which clears the way for Alex's twin sister, Nicole, who transfers a few weeks later. Sean flips for Nicole, which would make for a teen romantic comedy, not a book that would interest teen boys, or me for that matter.

Lynam turns the plot—and readers' expectations—on a surprise reveal: Nicole and Alex, and their Aunt Katherine are the same person, LX, the youngest historian to ever travel from the future. He plans to study his great-great-great grandson Sean, the grandfather of time travel. Sean, it seems, doesn't invent time travel, but his grandaughter creates the equations that make it possible.

Lynam pulls out all the stops, with routines that send up sixties situation comedies, classic guys-in-drag routines, and every Back-to-the-Future scenario imaginable. Sean, thanks to the tricks of time travel, spends half his time aware of the situation and half his time oblivious. His moments of awareness—specifically his awareness that Nanites in his bloodstream create his attraction attraction to Nicole (who is really his make grandson LX)—set up at much of the book's teen male oriented humor.

Alas, I found the joke wearing thin about 150 pages in. Perhaps because (I suspect) Lynam realized he could turn Before You Leap into a series and decided to change the ending, in which the two boys jump to the past, and make it into Book II. Instead Lynam changes the central conflict to a debate between the boys as to whether or not Sean should accompany Alex to the past and risk changing the timeline. This effectively pads the book, but reduces the element of conflict (and fun) by a factor of fifty.

All this being said, a reader of 16 may find the mayhem a lot more engaging than a reader of 62 (like me). Lynam does step up to the plate with a new wrinkle in time travel fiction. His character Sean challenges the time honored time travel dictum, "First, do no harm." When Alex/LX suggests Sean shouldn't time travel because he could damage historical timeline (e.g, create a new Hitler), Sean asks why it isn't possible he that he might make it better (e.g., produce the cure for cancer). This debate becomes central to the story that follows.

Before You Leap will never challenge readers on the level of Neal Stephenson or even Stanislaw Lem. Nonetheless, if you love science fiction and want to spend an afternoon with a fun read that mixes high school hi-jinx and old-school Shakespearean twists, dip your feet. If you enjoy it, you'll want to leap into the rest of the series.

Rating system:
5 = Delicious dialogue, crisp prose, clever characters & compelling plot
4 = Great read, won't want to stop (5 for many reviewers)
3 = Worth buying (but…)
2 = I will tell you what audience will like this, but other readers might want to look elsewhere
1 = If I review a book this bad I felt seriously compelled to warn you
Phillip T. Stephens is the author of "Cigerets, Guns & Beer," "Raising Hell" and the new release "Seeing Jesus."
Read more
8 people found this helpful
Report abuse

Brizzielady
5.0 out of 5 stars A series that made this picky time-travel fiction fan VERY happy!
Reviewed in the United States on January 2, 2019
Verified Purchase
So I went into this first book not knowing much about the story or the author, given that there were few reviews available at the time I purchased it. After finishing this book and moving on to the second (then the third), I wondered why on earth more people haven't discovered this gem of a series???

To the naysayers out there, yes, it is a YA genre. That said, the story is so unique and the many (initially anyway) characters are well-painted, articulate and likeable. The first book is certainly slightly more YA geared (yet still totally readable by adults) than Books 2 and 3. In my opinion, this is really because most of the scenarios take place at a school, whereas the other 2 books involve various other locations (near and far). Either way, make no bones about it..... this author can write!

Those of us who enjoy Time Travel/Light Sci Fi yarns will appreciate the fact that this isn't just another touch-the-stone-and-snog-a-highlander type of deal. The Time Will Tell series is simply a fun, funny, intelligent and entertaining tale. I, for one, am very much looking forward to Book 4!
Read more
One person found this helpful
Report abuse
See all reviews
Back to top
Get to Know Us
Make Money with Us
Amazon Payment Products
Let Us Help You
EnglishChoose a language for shopping. CanadaChoose a country/region for shopping.
© 2008-2021, Amazon.com, Inc. or its affiliates