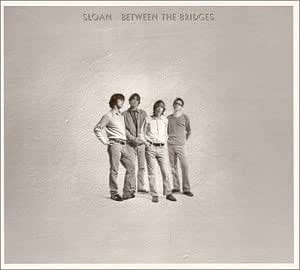 Sloan stake out their usual turf--a piece of emotional land somewhere on the border of knowingness and bemusement--on Between the Bridges. Their most ambitious yet, the album cleverly strings one track into the next while marshaling a full complement of early-'70s pop-rock influences (Todd Rundgren, Badfinger). The result is as creamy ("Don't You Believe a Word") and cutting ("Friendship") at times as Rumours; for good measure, there's the tear-away tour de force "Sensory Deprivation" and the echoes of Imagine that open "The N.S." In an age where few bands make it this far--Bridges is their sixth long-player, counting 1998's live 4 Nights at the Palais Royale--Sloan reaffirm their power with each new release. With any luck, this one will make more listeners outside their Canadian homeland aware of that fact. --Rickey Wright

4.5 out of 5 stars
4.5 out of 5
25 global ratings
How are ratings calculated?
To calculate the overall star rating and percentage breakdown by star, we don’t use a simple average. Instead, our system considers things like how recent a review is and if the reviewer bought the item on Amazon. It also analyzes reviews to verify trustworthiness.
Top reviews

Adam
4.0 out of 5 stars Ossim
Reviewed in Canada on December 30, 2019
Verified Purchase
Not their best record, but worth checking out
Read more
Helpful
Comment Report abuse

Mike Stone
5.0 out of 5 stars It's hard to believe they're just Nova Scotian boys
Reviewed in Canada on November 9, 2001
Ostensibly a concept album, Between the Bridges autobiographically follows Sloan's melancholy journey from East Coast pop heroes, to American pop failures, to prodigal sons returning home to past glories.
'The N.S.' acts as the album's overture. Told from the perspective of someone who's been spit out by the music business, it offers advice to a young pop band with pop dreams, itching to make it big. It's probably drummer Andrew Scott's most contemplative entry in the Sloan songwriting canon. Later on, her serves up 'Sensory Deprivation', a song of which I can't decide is an ironic send-up of mindless jock rock (a la Soundgarden's 'Big Dumb Sex') or sincere mindless jock rock. Either way, it's six aching minutes anchored by a dull riff that I skip every time.
By 'So Beyond Me', things are going terribly wrong for our boys. "Dance with the creeps and the queens / The kings have all gone home to bed / Gone is the American dream / That would have gone right to my head". Chris Murphy continually amazes me with his lyric writing. He pulls rhymes out of mid-air, throws in corny puns, all while writing deeply personal but universal pop tunes. 'All By Ourselves' continues the Sloan-goes-to-Hollywood theme, only now the boys are out west and starting to get burned for real: "But the do-it yourselfers want to do it so they can see a dime / Chances are you could see us selling as south as Anaheim". Chris puts the vitriol away later, on the stunning piano torch song workout 'The Marquee and the Moon' which manages to throw in references to admirable classic punkers Television, and the innocence of the Halifax punk rock scene. Oh, and to show Chris hasn't lost all his cheekiness, he slips into his rhyme scheme the word "onomatopoeia". Bless that boy's heart. He gets the album's last word with 'Delivering Maybes', a song full of optimism for Sloan's rock future ("On and on we roam around the world").
Jay Ferguson delivers three spectacular shy-boy pop ditties, starting with 'Don't You Believe a Word' ("Can't you see that I've been lost so long"), followed by 'Waiting for Slow Songs' (which deftly encapsulates Jay's songwriting m.o. in its chorus: "But you write the saddest song / Turn around and make it a singalong") and finally the awesome 'Take Good Care of the Poor Boy' (which is about the vanquished hero, returned home with his tail between his legs, but ecstatic to be there). This is Jay's strongest showing so far on any Sloan album.
Patrick Pentland's 'Friendship' is an ode to love gone bad ("Somebody get me a doctor, yeah"). It's soaked in his patented power chord riffing, and is a lot livelier than the subject matter would indicate. "A Long Time Coming" sees Patrick in poignant mode, twinning acoustic guitars and deft organ work with his sad voice to create a lovely little lament. 'Losing California' (on which Patrick trades vocals with Chris, following in the fine tradition of Twice Removed's 'I Hate My Generation' and Navy Blues' 'Money City Maniacs') is the most obvious, heart-on-their-sleeve diatribe against the American record industry ("And everybody loves it but nobody knows what it stands for / Get into yourself in dark sunglasses and elevate it all 'til it means more"). It's also the loudest, most raucous song here, great both for air guitaring and primal screaming.
It took me a long time to really get into this album. There are no true standout radio singles and it offers a sharp departure from other Sloan albums, with less big guitars and more soft pianos. Also, it's probably the most cohesive Sloan album yet, with the group's four songwriters collectively exploring all sides of one big idea. The first four tunes fade into each other, copping a trick the Beatles used on Sgt. Pepper, a comparison I don't make lightly, and one that Between the Bridges definitely lives up to.

Stan
4.0 out of 5 stars More excellent retro-pop from Canada's finest
Reviewed in Canada on July 19, 2000
Sloan is the best kept secret of the Great White North. Though the Toronto-via-Halifax quartet has been the toast of teenagers across Canada for more than half a decade, garnering gold records, tours with Alanis Morrisette and music videos galore, they are virtual unknowns in the United States. It's hard to understand why, because these perfectly adorable geeks have been churning out record after record of the kind of completely accessible retro-pop music Lenny Kravitz and Oasis take all the way to the bank. "Between the Bridges," a refreshingly concise 12-song aperitif, is no exception. If you're looking for musical visionaries, you've come to the wrong place. Sloan's greatest strength is certainly not the originality of their songs; one can easily hear references to classic rock standards throughout all of their records, and the nods to Steely Dan, Fleetwood Mac, John Lennon, Thin Lizzy, and even .38 Special are particularly evident on this album. Instead, what the lads in Sloan do so well is breathe new life into a classic rock formula made tired by endless, repetitive radio play. The superbly written songs on this and past Sloan albums defy notions of mere recycling by reminding listeners why they like classic rock and pop in the first place. The good cheer, enthusiasm, and efficient, skillful musicianship on "Between the Bridges" makes the album pretty difficult not to like. The band members, all of whom write and sing their own songs, exude charm as they crank out tunes that are imprinted on the listener's brain by the second listen (who can forget a couplet that rhymes "ocean" with "Nova Scotian"?). A couple of rote riff- rockers dampen affairs somewhat, but when you hear the creamy harmonies and funky rhythm guitar on the insanely catchy "Don't You Believe A Word," you may say to yourself: it's the same old song, but it sure sounds good.
Read more
Helpful
Comment Report abuse

Marc Kloszewski
3.0 out of 5 stars Holding pattern?
Reviewed in Canada on January 27, 2000
Count me as a Sloan fan--I own "Smeared", "One Chord to Another" and "Navy Blues"--but I was just a bit disappointed with this one. I don't know if I believe that you have to grow to like certain CDs, but "Between the Bridges" may have to take a few more spins to sink in--it's not as immediately accessible as their previous two efforts. The extended multi-mood "The N.S." (Nova Scotian) works to lead the set off, "So Beyond Me" is reasonably diverting, and "Don't You Believe a Word"'s vocals go down so smooth (strange, but the piano fill after the chorus reminds me of some chase scene music from "Big Bad Mama" or other backwoods adventure)--but much of the music in the middle of the CD is--not bad, but just not up to the standard they've spoiled me with. Sloan has a perfect right to stretch out and expand their musical palette, but when you do three-minute pop songs as well as they do, what's the point of something like "Sensory Deprivation", which seems the very antithesis of this group: a long jam, running a not-very-original riff into the ground (maybe it plays better in concert)? I was intrigued before with Tom Verlaine's group Television, but Sloan's tribute "The Marquee and the Moon" doesn't do much for me either. I will say, though, that the capper, "Delivering Maybes", as well as having a superb punny title is a rebound--wonderfully sophisticated lyrics (for pop) and a repeated refrain that sticks in the old cranium like we know these guys can do. My cranky review shouldn't dissuade the faithful--they've already bought it anyway, but newbies should definitely start with "Navy Blues" to appreciate Sloan's excellent songcraft, which, sadly reminds you of the type of stuff that used to be popular on the radio and is now MIA.
Read more
Helpful
Comment Report abuse
See all reviews

Marc Rosenthal
5.0 out of 5 stars One of their best
Reviewed in the United States on April 28, 2014
Verified Purchase
Way back when Fuse was Much Music, basically the canadian MTV, I used to tune in and this band caught my eye, mostly for the video of their Beatlesque "The Lines You Amend" When I had the means to explore them more thoroughly, I found myself picking up all of their CDs. Between the Bridges may be the best example of Sloan of any of their now 10 CDs. Their four members are all singer-songwriters, and have been known to switch instruments, if for instance their drummer needs to come up front to sing. They are four distinct voices but they come together so well as a band. Between the Bridges moves from song to song written by different members so smoothly you're hardly even aware of it. The outstanding songs here are Friendship and Losing California, and with Sensory Deprivation Sloan shows they can rock out like few bands can. I highly recommend this CD, and if you like it, pick up Navy Blues, Pretty Together, Never Hear the End of It, and the Double Cross, and sit back and wonder how this band never broke through in the US.
Read more
Report abuse

Theopolis
5.0 out of 5 stars Late comer to Sloan. All their albums have something ...
Reviewed in the United States on November 21, 2016
Verified Purchase
Late comer to Sloan. All their albums have something to offer, but for me, Betwixt The Bridges is top o' the heap.
Read more
Report abuse
See all reviews
Fast, FREE delivery, video streaming, music, and much more
Prime members enjoy Free Two-Day Shipping, Free Same-Day or One-Day Delivery to select areas, Prime Video, Prime Music, Prime Reading, and more.
> Get started
Back to top
Get to Know Us
Make Money with Us
Amazon Payment Products
Let Us Help You
EnglishChoose a language for shopping. CanadaChoose a country/region for shopping.
© 2008-2020, Amazon.com, Inc. or its affiliates