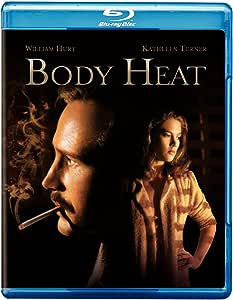 Secure transaction
Your transaction is secure
We work hard to protect your security and privacy. Our payment security system encrypts your information during transmission. We don’t share your credit card details with third-party sellers, and we don’t sell your information to others.
Ships from Switzerland and sold by nagiry.

While scoring high-profile credits as a screenwriter (including The Empire Strikes Back, Return of the Jedi, and Raiders of the Lost Ark), Lawrence Kasdan made his directorial debut with this steamy, contemporary film noir in the tradition of Double Indemnity and other classics from the 1940s. In one of his most memorable roles, William Hurt plays a Florida lawyer unwittingly drawn into a web of deceit spun by Kathleen Turner (in her screen debut) as a married socialite who plots to kill off her husband with Hurt's assistance. Kasdan's dialogue is a hoot (sometimes it borders on satire), and the sultry atmosphere is a perfect complement to the perspiration-soaked chemistry between Hurt and Turner, whose love scenes caused quite a stir when the film was released in 1981. John Barry's score sets the provocative mood, and both Ted Danson and Mickey Rourke are splendid in memorable supporting roles. --Jeff Shannon --

4.5 out of 5 stars
4.5 out of 5
643 global ratings
How are ratings calculated?
To calculate the overall star rating and percentage breakdown by star, we don’t use a simple average. Instead, our system considers things like how recent a review is and if the reviewer bought the item on Amazon. It also analyzes reviews to verify trustworthiness.
Top reviews

B. Montgomery
5.0 out of 5 stars It's hot!
Reviewed in Canada on May 18, 2018
Verified Purchase
Very happy with this purchase. A bit late in delivery but it did arrive. Good acting, well presented. Good drama, excitement and intrigue. An Oldie Goldie that still passes the tests of time.
Read more
Helpful
Report abuse

Spohnet
5.0 out of 5 stars I would buy again.
Reviewed in Canada on February 6, 2019
Verified Purchase
Great price, good quality product. I would buy again. I like the variety the brand and seller offer. Arrived quickly.
Read more
Helpful
Report abuse

KT
5.0 out of 5 stars Hot, sultry, with a splash of saxophone. & yet brilliant.
Reviewed in the United Kingdom on February 7, 2018
Verified Purchase
1981's Body Heat had all the ingredients to be really quite awful. Turned out to be not so. Star Wars co-writer Lawrence Kasdan' s debut in the directors chair was also to be the curtain raising feature for the movies true star Kathleen Turner. She positively rocks my world as the nasty scheming 'Marty Walker'. William Hurt co-stars as the doomed 'Ned Racine'. Poor Ned falls so madly in love with Maddie, that he even commits to murder on what is supposedly their joint behalf. To be fair, Turners on thus form could seduce those no longer with us. It all somehow feels too smart to labelled an erotic thiller, so only hesitantly will I call it so. The best movie of it's type.
Read more
4 people found this helpful
Report abuse

penny
4.0 out of 5 stars BODY HEAT
Reviewed in the United Kingdom on March 15, 2020
Verified Purchase
A CLASIC FILM NOIR WITH A LOVELY MISS TURNER PLAYING THE SEDUCTRESS WHO USES HER LOVER IN ORDER TO GET RID OF HER RICH BUT MUCH OLDER HUSBAND! I'M GLAD I FOUND IT FOR MY COLLECTION!
Read more
Report abuse

Lucy
5.0 out of 5 stars Classic film noir.
Reviewed in the United Kingdom on May 18, 2018
Verified Purchase
Great chemistry between the main protagonists, this is classic film noir, smouldering and menacing.
Read more
3 people found this helpful
Report abuse

Glenda Wray
5.0 out of 5 stars One of my favourite films
Reviewed in the United Kingdom on April 23, 2014
Verified Purchase
This is a film I have watched at least three times in the past, so wanted it 'on the shelf'. The plot is brilliant and the atmosphere created during the hot summer nights as the plot builds is also very clever. William Hurt and Kathleen Turner work well together. It's an old film now in 2014, but never seems dated to me.
Read more
6 people found this helpful
Report abuse

NeilB
5.0 out of 5 stars A must see
Reviewed in the United Kingdom on April 22, 2016
Verified Purchase
Everybody should have this one in their special collection. It;s got everything.
Read more
2 people found this helpful
Report abuse
See all reviews
Fast, FREE delivery, video streaming, music, and much more
Prime members enjoy Free Two-Day Shipping, Free Same-Day or One-Day Delivery to select areas, Prime Video, Prime Music, Prime Reading, and more.
> Get started
Back to top
Get to Know Us
Make Money with Us
Amazon Payment Products
Let Us Help You
EnglishChoose a language for shopping. CanadaChoose a country/region for shopping.
© 2008-2021, Amazon.com, Inc. or its affiliates