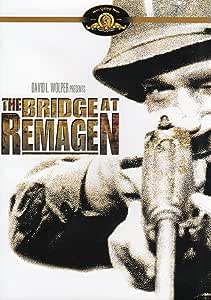 The Bridge At Remagen (Widescreen)

Fine casting, rugged characters, and authentic military detail make The Bridge at Remagen one of the best World War II action films of the 1960s. Based on actual incidents during the final Allied advance on Germany in March 1945, the story focuses on the U.S. Army's exhausted 27th Armored Infantry, assigned to seize the bridge at Remagen, on the Rhine River, to prevent 50,000 German troops from retreating to safety. Lieutenant Hartman (George Segal) leads the mission, while a Nazi major (Robert Vaughan) defies orders by attempting to hold the bridge instead of blowing it up. With strong emphasis on war's harsher realities, the film features compelling characters who illustrate the camaraderie of survivors and the heroism of mavericks in the thick of battle. Segal and Ben Gazzara effectively convey a hard-won friendship, and the film's dynamic action (filmed in Czechoslovakia and Italy) never overwhelms the story's emotional impact. Highly recommended. --Jeff Shannon

4.2 out of 5 stars
4.2 out of 5
269 customer ratings
How does Amazon calculate star ratings?
Amazon calculates a product’s star ratings using a machine learned model instead of a raw data average. The machine learned model takes into account factors including: the age of a review, helpfulness votes by customers and whether the reviews are from verified purchases.
Top Reviews

Brian
3.0 out of 5 stars Bridge at Remagen Review
Reviewed in Canada on June 17, 2014
Verified Purchase
The story did not follow the actual events close enough, it was too much entertainment for me. However, it was okay if you wanted to know where the Allies crossed the Rhine and a general idea of how the bridge survived to be used by the Allies. The specially feature about where the movie was filmed and the issues they had filming in Czechoslovakia was interesting. The Battle of the Bulge, The Longest Day, a Bridge too Far are better war movies.
Read more
Helpful
Comment Report abuse

Gord
5.0 out of 5 stars Five Stars
Reviewed in Canada on March 8, 2017
Verified Purchase
This was an enjoyable movie and showcased a part of WW2 history..
Read more
Helpful
Comment Report abuse

Darth Maciek
5.0 out of 5 stars "Take that bridge and we shorten the war. We're risking a hundred men, but we may save 10,000 - even 50,000!"
Reviewed in the United Kingdom on September 21, 2017
Verified Purchase
IMPRESSIVE! This is one of the best war films I ever saw. Realistic, intelligent and tough it avoids both the traps of jingoistic propaganda and primitive anti-militarism. Below, more of my impressions, with some limited SPOILERS.

The film begins by showing two very different groups of combatants before they fight at Remagen. An American mechanized company, serving as an advance/reconnaissance element of a whole division, just lost its captain and is now commanded by Lieutenant Hartman (George Segal) - he barely has the time to take charge, when he receives orders to advance to Rhine and seize the town of Remagen, expected to be only lightly defended. In the same time on other side of the Rhine a certain Major Paul Kreuger (Robert Vaughn) is charged with the defense of Remagen with only a handful real soldiers, supported by some Volksturm and Hitlerjugend auxiliaries. He must especially defend the most crucial local installation - the Ludendorff Bridge. However, by special order of Hitler himself, bridges on Rhine can be destroyed only at the last moment, to allow a maximum of German troops to escape from the Western side. This, together with the small number of soldiers and weak quality of explosives Kreuger receives, will transform this small engagement into an event of monumental strategic importance - and a great, dramatic story...

As already said, the scenario is BRILLIANT, with strong dialogs, great tension, lots of heartbreak and even though we know how the story will end the film never bores the viewer, even for one second. Fighting scenes are very strong, amongst the best of those ever made before the "Saving Private Ryan" era. Actors are AMAZING - Segal and Vaughn shine in this film but THE star is Ben Gazzara, who plays Sergeant Angelo, an incredibly dangerous warrior but also a character shady as f*ck.

A particularly powerful element is the description of everything that happens on German side. The shadow of omnipresent terror maintained by the SS, SD and Gestapo casts a veil even on the full noon sunshine. The director managed also to recreate perfectly the general atmosphere of Gotterdammerung, especially perceptible in the terminal exhaustion of German civilians crushed by five years of sacrifices rewarded only by the looming threat of unavoidable defeat.

A very strong element is that there is no clichés of "stupid generals, stupid officers". There is only one recless officer in the film and very logically he meets a quick death; all others, including highest ranking hierarchy on both sides, act logically and with dignity, doing their duty. The fatal weaknesses on German side, which allow Americans to make an attempt to seize the bridge, are lack of sufficient number of soldiers and insufficient supplies, not the failure of command.

The incredible courage of American soldiers and desperate determination of the handful of German defenders which made this battle so tough and heartbreaking is very, very well shown. This film is quite frequently very moving.

Bottom line, this is a very good war movie, a very good recreation of a significant real event, a good history lesson on WWII in Europe and also the nature of III Reich and last but not least a darn good film. I really wish that present day directors could take some lessons from John Guillermin. I am very glad that I bought and saw this film and I will totally keep the DVD for another viewing. ENJOY!

johnk42
5.0 out of 5 stars One of the best war films ever made
Reviewed in the United Kingdom on January 16, 2015
Verified Purchase
One of the best war films ever made. It makes that piece of woeful crap Inglourious Basterds look even worse if that is possible. The inclusion of the idiotic romantic interests slows the pace a couple of times but otherwise a wonderful war film. The part played by Robert Vaughn beautifully illustrates the predicament of a decent man in a nightmarish predicament
Read more
2 people found this helpful
Helpful
Sending feedback...
Thank you for your feedback.
Sorry, we failed to record your vote. Please try again
Report abuse

Malcolm McDonald
4.0 out of 5 stars Bridge At Remagen
Reviewed in the United Kingdom on June 26, 2013
Verified Purchase
Typical 2nd world war 2 pot boiler.A squad so often volunteerd by their cowardly commanding officer eventually fight for the Bridge of the title,with "The man from Uncles"Robert Vaughn very good here as the defensive German officer trying to hold the it.Good stuff to be had here with plenty of action along the way.Ben Gassara is the sultry sargent and George Segal turns in a good performance as the head of the platoon.
Read more
One person found this helpful
Helpful
Sending feedback...
Thank you for your feedback.
Sorry, we failed to record your vote. Please try again
Report abuse
Load more international reviews

Kryptonian
2.0 out of 5 stars It just alright
Reviewed in the United Kingdom on September 14, 2019
Verified Purchase
Watched the show it’s ok, not a bridge too far that’s for sure
Read more
Helpful
Sending feedback...
Thank you for your feedback.
Sorry, we failed to record your vote. Please try again
Report abuse

Francis H.
5.0 out of 5 stars Amazing
Reviewed in the United Kingdom on November 2, 2018
Verified Purchase
I love this film, I had it on video tape when I was younger recommend it so much!
Read more
Helpful
Sending feedback...
Thank you for your feedback.
Sorry, we failed to record your vote. Please try again
Report abuse

Peter
5.0 out of 5 stars ?
Reviewed in the United Kingdom on November 9, 2019
Verified Purchase
Its good
Read more
Helpful
Sending feedback...
Thank you for your feedback.
Sorry, we failed to record your vote. Please try again
Report abuse

anon
5.0 out of 5 stars Brilliant film - extremely well acted
Reviewed in the United Kingdom on June 5, 2015
Verified Purchase
Brilliant film - extremely well acted, filming great - and interesting as an insight to what happened at Remagen. Would lead to finding out the actual history of the time and battle. Would recommend.
Read more
Helpful
Sending feedback...
Thank you for your feedback.
Sorry, we failed to record your vote. Please try again
Report abuse

E norton
5.0 out of 5 stars a great war film
Reviewed in the United Kingdom on October 20, 2016
Verified Purchase
a great war film, that tells the story of 3 bridges that the allies need to catch.and the long fight it took to take them
Read more
Helpful
Sending feedback...
Thank you for your feedback.
Sorry, we failed to record your vote. Please try again
Report abuse