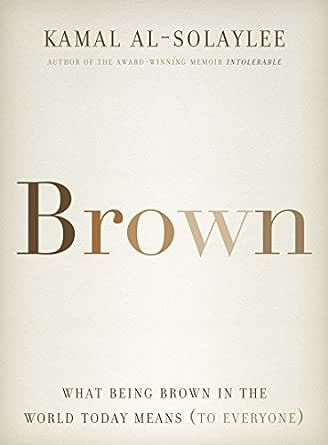 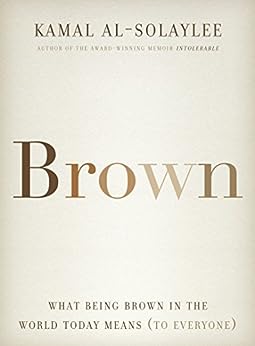 Brown: What Being Brown in the World Today Means (to Everyone) Kindle Edition

Kamal Al-Solaylee, an associate professor at the School of Journalism at Ryerson University, was previously a distinguished writer at Canada’s national newspaper The Globe and Mail. Al-Solaylee also worked at Report on Business magazine and has written features and reviews for the Toronto Star, National Post, The Walrus, Toronto Life, Chatelaine, eye weekly, the Literary Review of Canada and Elle Canada. Al Solaylee’s bestselling memoir Intolerable was a finalist for the Hilary Weston Writers’ Trust Nonfiction Prize, the Lambda Literary Award, and Canada Reads, and won the Toronto Book Award. Brown is a finalist for the Governor General's Award for Literary Non-fiction. Al-Solaylee holds a PhD from the University of Nottingham and has taught at the University of Waterloo and York University. Al-Solaylee lives in Toronto.

“Brilliant.” (The Walrus)^“Impressive and expansive . . . essential reading, not only for brown people seeking connection or explanation, but for anyone with any stake in understanding the non-white world.” (The Globe and Mail)^“Kamal Al-Solaylee has written one of the most important books to come out of Toronto this year. . . A fascinating read.” (Toronto Star)^“A masterful fusion of Al-Solaylee’s own observations, anecdotes from his interview subjects and analysis . . . Brown reads almost like an identity-politics thriller, as vivid as it is informative . . . one of those important books that will stay with you.” (Salon.com)^“Brown is a work of such intelligence, depth, uniqueness and compassion. . . . A rare accomplishment--a glimpse into another world from within that world. Masterful, original, insightful and ultimately essential reading.” (Deepa Mehta, award-winning director of Water and Midnight's Children)^“In this extraordinary book, Kamal Al-Solaylee gives a name, an identity and a story to the disparate billions whose labours, migrations and struggles define our time. A stirring narrative, an empowering manifesto and an unprecedented bid for recognition. This book will change the way you see the world.” (Doug Saunders, The Globe and Mail, and author of Arrival City and The Myth of the Muslim Tide)^“Brown is audacious and original, heartfelt and intrepid. By going behind the scaffolding, Kamal Al-Solaylee raises important questions about the hidden foundations of our unfolding century.” (Charles Foran, author of Mordecai: The Life and Times)^“Kamal Al-Solaylee perfectly captures the beauty and heartbreak of being brown. This ambitious and powerful book is mandatory reading for anyone who wants to understand the complexities of race relations in our globalized world. You’ll never see a brown person in the same way again.” (Zarqa Nawaz, author of Laughing All the Way to the Mosque and Creator of Little Mosque on the Prairie)^“Brown is a riveting exploration of the ambiguities of race and a window on a multitude of worlds. It’s also thoroughly researched, beautifully argued, and written with grace and clarity.” (Michael Redhill, award-winning author of Martin Sloan and Consolation) --This text refers to the paperback edition.

4.5 out of 5 stars
4.5 out of 5
13 customer ratings
How does Amazon calculate star ratings?
Amazon calculates a product’s star ratings using a machine learned model instead of a raw data average. The machine learned model takes into account factors including: the age of a review, helpfulness votes by customers and whether the reviews are from verified purchases.
Top Reviews

Cindy
3.0 out of 5 stars Its not about the black or white
Reviewed in Canada on February 4, 2017
Verified Purchase
The book started out with a lot of data, made me feel like I was taking a course. I am reading this book for my book club, it was not a personal choice. The book is about the brown experience, mostly immigration...migrant workers, legal and illegal across the globe. Although the author includes Japanese and Chinese in his "brown" category, not much is mentioned of them. Aboriginal brown people are also not discussed. He talks to various individuals about their experiences. At one point he wonders why one brown group doesn't look out for another brown group. Coming from different cultures, why is being "brown" the criteria for brotherhood?
Although well researched, I find the book to be tedious at times. If you care about the brown experience, you are either in it, or are aware of much of the findings. If you don't care, you aren't likely to read this book. I doubt that anyone with a racist attitude would bother, even though these are the ones needing enlightening.

Dundas doc
4.0 out of 5 stars Rated by my daughter for whom I bought this book.
Reviewed in Canada on September 23, 2018
Verified Purchase
Found it relevant.
Read more
Helpful
Comment Report abuse

Regina Rodriguez-Martin
5.0 out of 5 stars Global look at immigrant/migrant labor
Reviewed in the United States on December 20, 2016
Verified Purchase
So often discussions of race only include black and white, while the world has actually been filling up with brown people. Al-Solaylee looks at how brown immigrant workers survive in host countries all over the world, including Asia, the Americas and the South Pacific. He discusses the universality of colorism and the global economy that requires people to leave their home country just to earn enough to keep their family fed and housed. His theory is chilling that for uneducated brown people, your skin color determines your economic mobility.

The author uses many personal stories to keep the analysis grounded in real experience and not too theoretical. He spent months (years?) interviewing workers all over the world. Although the material can be grim, Al-Solaylee's writing style is warm and occasionally humorous, indicating that a real person did this fieldwork, not some dry scientist. I recommend this book for a look at how brown people survive in host countries all over the world, and to see how Mexicans in the U.S. fit into this dynamic (as a Mexican-American, that's my particular interest).

Jesse S. Roa
4.0 out of 5 stars Good reading
Reviewed in the United States on July 24, 2018
Verified Purchase
A very informative and revealing book as seen from a Muslim and an immigrants' perspective very little publicized. Good reading
Read more
Helpful
Sending feedback...
Thank you for your feedback.
Sorry, we failed to record your vote. Please try again
Report abuse

Sara Schaffzin
5.0 out of 5 stars worth taking the time to read
Reviewed in the United States on August 16, 2018
Verified Purchase
Some I knew but much I didn't in this well-written, thought-provoking book.
Read more
Helpful
Sending feedback...
Thank you for your feedback.
Sorry, we failed to record your vote. Please try again
Report abuse

Guillermo
5.0 out of 5 stars An eye opener book
Reviewed in the United States on November 8, 2016
Verified Purchase
I liked this well written book. I think that people who are interested in undestanding the world where we live in will like it too. Readers can gain knowledge of what it is like to work and live in the world today being brown, acknowledge the big contrast between being brown or white, for example, in developed countries as well as in developing countries. This book was an eye opener for me. I am seeing people around me in a completely new light now.
Read more
9 people found this helpful
Helpful
Sending feedback...
Thank you for your feedback.
Sorry, we failed to record your vote. Please try again
Report abuse