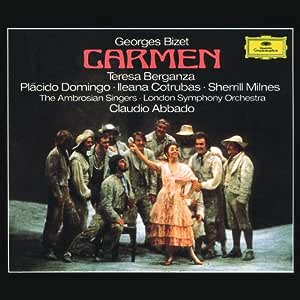 This is a super performance, slightly outside the common mold. In 1977, when this was recorded, Claudio Abbado was a great opera conductor, filled with sharp insights and a nice sense of the architecture of whole operas. He always seemed to know where he was going, and his ability to build to climaxes was second to none. Abbado has a rather elegant Carmen here in the smallish-voiced, introspective Teresa Berganza, a gorgeous singer who patently refuses to force her voice or her character into vulgarity. It's a fine reading. Placido Domingo is at his best in both intimate and maniacal moments, and Ileana Cotrubas's Micaela almost makes us care about this sappy little gal. Sherrill Milnes's Escamillo has plenty of swagger and voice. Berganza's subtlety combined with the wild passions of those around her make this a very good Carmen indeed. --Robert Levine

This is a super performance, slightly outside the common mould. In 1977, when this was recorded, Claudio Abbado was a great opera conductor, filled with sharp insights and a nice sense of the architecture of whole operas. He always seemed to know where he was going, and his ability to build to climaxes was second to none. Abbado has a rather elegant Carmen here in the smallish-voiced, introspective Teresa Berganza, a gorgeous singer who patently refuses to force her voice or her character into vulgarity. It's a fine reading. Placido Domingo is at his best in both intimate and maniacal moments, and Ileana Cotrubas's Micaela almost makes us care about this sappy little gal. Sherrill Milnes's Escamillo has plenty of swagger and voice. Berganza's subtlety combined with the wild passions of those around her make this a very good Carmen indeed. --Robert Levine

3.9 out of 5 stars
3.9 out of 5
30 global ratings
How are ratings calculated?
To calculate the overall star rating and percentage breakdown by star, we don’t use a simple average. Instead, our system considers things like how recent a review is and if the reviewer bought the item on Amazon. It also analyzes reviews to verify trustworthiness.
Top reviews

Emma de Soleil
5.0 out of 5 stars A blazing Carmen!
Reviewed in Canada on February 6, 2004
Carmen was the first opera I ever heard and to this day I think that there's no greater Carmen than Julia Migenes but Berganza, de los Angeles and Callas come VERY close indeed. I have a Carmen-video with Berganza where she is just MAGNIFICENT as the Spanish temptress. Changing from Rosina etc. to Carmen might be a little surprising but, oh my, who would have thought that the young singer who was Callas' eqxuisite partner in the legendary Dallas Medea would bloom to such heights? A very tasty habanera, a wicked segeduilla and a dark card-scene... She is superb in the dramatic finale where her partner, Placido Domingo, sounds equally stunning. Domingo sang on three complete Carmens and even though I prefer the Migenes-Domingo recording for its dramatic finish and the Troyanos-Domingo recording for vocal splendour this is a great recording indeed. Esp. the Flower-aria is exquisitely sung. I never cared much for Milnes and find his Escamillo not to be quite idiomatic (Ruggero Raimondi is just unbeatable) but he's quite alright. A MUST for every Carmen-lover!
Read more
Helpful
Comment Report abuse

M. Ferrer
5.0 out of 5 stars THE BEST CARMEN
Reviewed in Canada on February 3, 2004
That Teresa Berganza is a great singer it is not new. But hearing her Carmen is almost a mystical experience.
She knows Carmen. She knows when she is seductive, and when she is wicked, when she is in love and when she hates.She makes Carmen hers.
Domingo is a great Don Jose. We can feel his weakness and desesperation. La fleur que ti m'avez jetee is probably his best in this recording.
And the orchestra directed by an inspired Abbado is glorius. And I have to say this because ussually Abbado is not my cup of tea. But I find this Carmen perfect.
Read more
Helpful
Comment Report abuse

Bill
1.0 out of 5 stars Berganza is a bloodless Carmen
Reviewed in Canada on January 26, 2000
I bought this a number of years ago and was terribly disappointed. Carmen requires fire and passion, and Berganza gives a carefully controlled and passionless rendering of the fiery heroine. Other singers are fine; I love Cortrubas's somewhat rough but expressive voice, and Domingo and Milnes are always fine. I'd say try the old recording with Regina Reznick if you really want a classic, or try to find one with Elena Obratzova --sensuality personified!
Read more
Helpful
Comment Report abuse

carmen juarez
5.0 out of 5 stars Dream Team "Carmen"
Reviewed in Canada on November 8, 2000
The voice of Teresa Berganza is one of the wonders of the age, if forced to choose, I would say it's the most beautiful voice I have ever heard. But the great Spanish mezzo is far more than just beautiful sounds, she goes deep into the characters she sings, and brings magic to her Carmen. She was wise to wait until she was 40 to sing and record this role, the voice was at its very best in the mid 70's, and she sings even the more dramatic passages with ease and conviction. In my book there is no better Carmen than she, Victoria de los Angeles would come in second place, but of course, her portrayal wouldn't have been possible on stage. Placido Domingo was born to sing Don Jose, and Sherrill Milnes is a very good and sonorous Escamillo. But it is the magnificent conducting of Claudio Abbado which leaves me speechless. He understands better than anyone else this miraculous score, he draws gorgeous sounds from the LSO and builds the drama inexorably. This is one of the truly GREAT opera recordings of the century
Read more
Helpful
Comment Report abuse

M.Fomin
2.0 out of 5 stars Femme Fatale ... for the music of Bizet
Reviewed in Canada on December 23, 2003
Berganza isn't a tragic actress. Her bright voice is deprived of true sensuality. No sign of intensity, no "tears in her eyes". Only feeling's convincing - the hate: after her furious last "Tiens!" I understand that Jose has nothing but kill her.
The vocal aspect of this interpretation is also sad: Carmen requires finest musicality and perfect voice control that Berganza can hardly provide. Her tempi are mechanical, accents - primitive, the lack of dynamic shades - fatal. Sometimes she produces beautiful sound, but generally lower register sounds rough, tremolos - not elastic enough, tops - screaming (last "tra-la-la" in "Seguedille" - just awful).
Though Domingo's interpretation is as always excellent vocally, he can't touch me still. Cotrubas's charming, her musicality excites me. Chorus sounds wonderful. Abbado's button is uneven: sometimes - good ( "A deux cuatros"), most times - not (sleepy "oiseau rebelle", too fast final).
Read more
Helpful
Comment Report abuse

J. Luis Juarez Echenique
5.0 out of 5 stars Berganza's Carmen: as good as it gets.
Reviewed in Canada on February 15, 2000
Don't believe everything you read. Teresa Berganza's portrayal of Carmen is peerless. Her carefully considered interpretation lacks nothing in fire, it's just that Berganza gives a "French" reading rather than an italianate one. This is as stylish and beautiful a Carmen as you will ever get.
Read more
Helpful
Comment Report abuse

Isabella Channel
5.0 out of 5 stars Exquisite recording of *CARMEN*
Reviewed in Canada on March 6, 2000
I agree with those who love this recording. Those few who don't, I can't understand. La Berganza sings a ravishingly beautiful Carmen and certainly no one does it better. Not Callas, not Price, not Baltsa and certainly not Resnik. Domingo as Don Jose is outstanding, and Abbado conducts with white-hot passion. This recording made in 1977 has aged extremely well, the sound is far better than the cavernous Karajan set.
Read more
Helpful
Comment Report abuse

Amazon Customer
5.0 out of 5 stars The very best CARMEN recorded to date
Reviewed in Canada on February 11, 2003
I have to throw my unabashed endorsement of this recording into the ring. Abbado, Berganza, Domingo, Cotrubas, Milnes made a superb team and a CARMEN for the ages. I first bought this on vinyl when it was a first issue in the seventies. I have owned and listened to many other versions. But I keep coming back to this, drawn like a moth to a flame by Berganza's intelligent, haughty, supremely self-aware portrayal of the supreme operatic heroine. You sense that Berganza would never let this Carmen become a mere victim. She knows she is implicit in her own destiny, but rides it all the way, regardless. Abbado elicited ravishing sounds from the LSO, intensifying the lighter-than-air quality of French opera, but spiced with peppery Spanish flavours. You can't go wrong with this recording. I just bought it on CD again. I love it so!
Read more
2 people found this helpful
Helpful
Comment Report abuse
See all reviews

K. Harvey
5.0 out of 5 stars Great performances all round!
Reviewed in the United Kingdom on August 5, 2007
Verified Purchase
I have the highlights of this on casette and cannot find a more satisfying version of "Carmen".

It was exceptionally well cast. Domingo (Don Jose) and Milnes (Escamillo)are both fabulously in full voice and Ileana Cotrubas the most moving Micaela I have ever heard. The greatest applause though must go to Teresa Berganza who really sings the title role to perfection with hot-blooded Spanish passion but also a confidence which commands our respect and sympathy, retaining musicality in every last note.

I really do hope that Deutsche Gramaphon will re-release this because it well deserves another opportunity.
Read more
34 people found this helpful
Report abuse

B. Friedman
5.0 out of 5 stars A wonderful gift for an opera lover.
Reviewed in the United States on November 28, 2013
Verified Purchase
I bought this as a gift for a young man who loves opera and he was extremely pleased with it.
Read more
Report abuse
See all reviews
Fast, FREE delivery, video streaming, music, and much more
Prime members enjoy Free Two-Day Shipping, Free Same-Day or One-Day Delivery to select areas, Prime Video, Prime Music, Prime Reading, and more.
> Get started
Back to top
Get to Know Us
Make Money with Us
Amazon Payment Products
Let Us Help You
EnglishChoose a language for shopping. CanadaChoose a country/region for shopping.
© 2008-2020, Amazon.com, Inc. or its affiliates