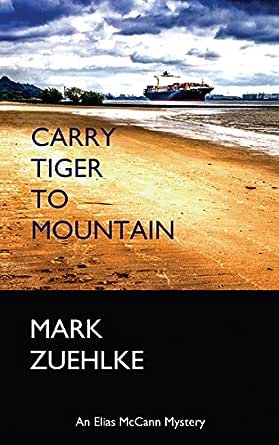 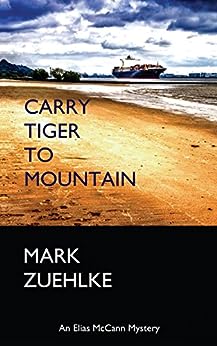 Carry Tiger to Mountain, the second venture in Mark Zuehlke's Elias McCann mystery series, opens with the thrilling wreck of a decrepit refugee ship from China on the rocky shore north of Tofino on Vancouver Island's stormy west coast. The resultant rescue of illegal immigrants involves local coroner McCann and Vhanna, his Cambodian girlfriend, who hope to save a young Chinese girl and a Cambodian cousin from B.C.'s Chinese smugglers, the Snake Heads. The wild landscape and seascape are both gorgeous and dangerous and play an inescapably important role in this well-constructed thriller.

Zuehlke draws believable portraits of his characters, especially the thickheaded, irascible Danchuk, the local RCMP sergeant and McCann's nemesis. Less believable is the fact that both Elias and Vhanna are independently wealthy (from different but equally unlikely sources), and the presence of Vhanna's cousin, Kim, a former Khmer Rouge boy soldier, working as a cook on the refugee ship. Nevertheless, the story is sufficiently complex and engaging throughout, despite a somewhat hurried conclusion. And, for a mystery that features a coroner, the novel manages not to dwell on the gorier aspects of his occupation. McCann prefers to solve crimes, to the endless frustration of Danchuck and the rest of the RCMP and the ultimate discomfiture of the bad guys. --Mark Frutkin --This text refers to an out of print or unavailable edition of this title.

Mark Zuehlke lives and writes on Vancouver Island. His previous books include Ortona: Canada's Epic World War II Battle (Stoddart, 1999), The Yukon Fact Book (1998), The Alberta Fact Book (1997), The BC Fact Book (1995), The Gallant Cause: Canadians in the Spanish Civil War, 1936-1939 (1996), and Scoundrels, the Dreamers and Second Sons: British Remittance Men in the Canadian West (1994). His previous Elias McCann mystery, Hands Like Clouds, (2000) was the recipient of the Crime Writers of Canada's Year 2000 Arthur Ellis Award for Best First Novel.

--This text refers to an out of print or unavailable edition of this title.

When a freighter smuggling illegal immigrants from Southeast Asia sinks offshore, Tofino coroner Elias McCann finds himself at the heart of another mystery.

Among the survivors of the tragedy is a young girl, whom Elias and his girlfriend, Vhanna, find themselves trying to protect from unknown kidnappers. Meanwhile, a relative of Vhanna's turns up among the immigrants, bringing back memories of her dark past and the Khmer Rouge. As the plot unfolds, compelling questions are raised: most importantly, who is responsible for the immigrants being here, and what do they want with Vhanna's cousin?

"another of Zuehlke's patented action-packed endings concludes the book." (The Daily News, Kamloops, BC 2004-07-24)

"this is the second outing for Dr. Elias McCannZuehlke has brought bnack his successful cast of characters, maintained his setting and improved his plotting." (Globe and Mail 2002-10-12) --This text refers to an out of print or unavailable edition of this title.
Read more
click to open popover