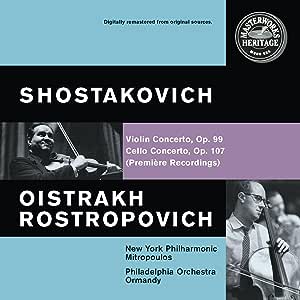 Sony has brought together Shostakovitch's greatest concertos in first recordings made soon after their American premieres by the artists most closely identified with them. Neither performance has been bettered, though some, such as Vengerov's Teldec Violin Concerto, come close. The Violin Concerto is in solid, detailed mono; the Cello Concerto in fine stereo. Oistrakh goes to the heart of the violin work, playing with extraordinary tonal magnificence and emotional power. He's matched by Mitropoulos, whose identification with the score is apparent. Rostropovitch is as good in the Cello Concerto, getting excellent support from Ormandy's Philadelphians. Both performances share the white heat of fresh discovery and have stood the test of time to become classic recordings. --Dan Davis

4.5 out of 5 stars
4.5 out of 5
34 global ratings
How are ratings calculated?
To calculate the overall star rating and percentage breakdown by star, we don’t use a simple average. Instead, our system considers things like how recent a review is and if the reviewer bought the item on Amazon. It also analyzes reviews to verify trustworthiness.
Top reviews

David M. Goldberg
5.0 out of 5 stars Hang in there!
Reviewed in Canada on July 16, 2011
Verified Purchase
I had the good fortune as a student to hear both of these great virtuosos perform these self-same works with Mravinsky conducting what was then the Leningrad Philharmonic Orchestra in the presence of the frail composer during one of the Edinburgh Festivals in the early 1960s. To this day I can close my eyes and, at least partly, relive these mind-blowing experiences. Paradoxically, when I hear these works on the radio or phono in the quiet of my own home, they never sound the same as they did in the exciting ambience of the live concert hall. I suspect that they will be much more rewarding in DVD format although I have not yet had the chance to test that hypothesis. Quite simply, these are very difficult works for the listener. They contain passages that are playfully rhythmic and others that are bombastic and even sarcastic, but more than any others, they are pervaded by moods of a sad lyricism that is profound, philosophical and pessimistic. Long passages of the latter can erupt without much warning into short bursts of the former. The structures are also complex, with several themes being carried forward into succeeding movements like leitmotifs. The slow passages are often given over to long atonal string solos. It is much easier to listen to them (and appreciate them) when one has the orchestra, the conductor, the soloist and even other members of the audience to look at. Each concerto has 4 movements, and so a lot of concentration is required to understand the composer's message and to appreciate the beauty that lies below the surface of the more austere passages. You may need to listen several times to each work, but you will be well rewarded. Not only are they clearly the offspring of this great composer --- they are so similar in style as to be virtually twins. Yet the Violin Concerto was started just after WWll and was completed and performed for the first time only in 1955 after the persecution that prompted its abandonment was relaxed. By 1959 when the Cello Concerto was written, conditions had improved for Shostakovich, but the following year he joined the Communist Party for the first time, probably as a result of pressure from the authorities. The joy of success and the sorrow of persecution seem to have been as integral to his life as to his compositions, and are well reflected in these two concertos. The performances of both are inspirational. I only possess the Midori/Abbado version of the Violin Concerto that is much better recorded than the present version, but brings to the interpretation a fraction of the commitment and warmth displayed by Oistrakh;moreover, Abbado's grasp of the composer's score is not as convincing as that of Mitropoulos, and I could not find much evidence of his having recorded any other of Shostakovich's major works. The Kliegel/ Wit recording of the cello concerto offers marvellous recording quality and a stunning performance by the soloist, but the rhythmic clarity and grasp of the orchestral structure revealed by Ormandy greatly exceeds that of his Polish counterpart. No other performances that I have heard in any medium over the last 50 years can surpass those of the present two Russians who have done so much to promote the creative genius of their great friend and compatriot, and they have been very well served by their respective conductors and their distinguished orchestras.
Read more
One person found this helpful
Helpful
Comment Report abuse

D. J. Zabriskie
5.0 out of 5 stars Getting It Right the First Time
Reviewed in Canada on May 20, 2004
This is a wonderful pairing of two of the great Shostakovich
concertoes. If I could award it 6 or 7 stars I would!
These are the "premiere" recordings of these works in the West,
and nothing has quite equalled them in their brilliance of conception and execution since. We are presented with the marvelous gifts of hearing these pieces played by the soloists
for whom the composer wrote them, and the rewards are thrilling
and unsurpassed. As noted elsewhere, David Oistrakh was one of the half dozen or so greatest violinists of the 20th Century, and besides his flawless technique he exhibits the warmth of tone, the sensitivity, the flexiblity and the overall musicality
which set him apart as a performer. For his part, Dimitri Mitropoulos accompanies his soloist with the type of genius too few conductors bring to this piece. Very few conductors were as gifted as Mitropoulos in looking at an unfamiliar score, imagining it whole and realizing that conception with brilliance.
Despite the monoural sound, the New York Philharmonic has seldom sounded better.
Likewise, Mstislav Rostropovich was one of the half dozen or so
greatest cellists of the last century. Only Casals, DuPre and
Yo-Yo Ma deserve to have their names mentioned along with his.
Rostropovich brings similar musical gifts to his reading of the cello concerto as Oistrakh brings to the violin concerto, together with a personality which expresses both the humor and the fatalism of Shostakovich with such subtlety, it takes a while for the listener to appreciate it all. Yet the real revelation here is the conducting of Eugene Ormandy. This is Ormandy before he began to play it safe, and concentrated more on lushness of orchestral tone than in challenging his listeners.
While that glorious "Philadelphia sound" is present throughout the cello concerto, it is well contained and well directed, and always at the service of both the soloist and the music.
If you can find any recording of either of these concertoes that comes up to these, please let me know.

Polypterus
4.0 out of 5 stars Cello concerto is great. Violin concerto is just good.
Reviewed in Canada on June 7, 2004
I have heard several recordings of Shostakovich Cello concerto #1, but nothing tops this one. This is one of those pieces needs a top-notch cellist and orchestra to sound good. Otherwise it can easily sound like a muddle. I always feel like I have been on a long trip after listing to this piece. It starts out deceptively light with it's four note theme but quickly takes a darker turn. The second movement features two haunting yet beautiful themes. The cadenza starts out slow and brooding and reprises both themes from the second movement. It slowly turns demonic and leads directly into the final movement. The final movement adds a new exotic theme but then brings back the original four-note theme with a vengeance. As for the violin concerto it isn't bad by any means. My problem with it is I first heard a live version of this piece also recorded by Oistrakh (I think on BBC Legends) which despite the audience noises blows this one away. In addition I believe it was in stereo where as this version was recorded in mono.
Read more
2 people found this helpful
Helpful
Comment Report abuse
See all reviews

Tomboy
5.0 out of 5 stars SHOSTAKOVICH THE GENIUS
Reviewed in the United Kingdom on May 4, 2015
Verified Purchase
Shostakovich was a genius and here his music is played by two fellow geniuses. Love the violin concerto by probably the best violinist of the last century. However, the cello concerto is one of the very greatest pieces of classical music ever composed - thrilling and threatening, and yet whimsically melodic throughout. Only a genius could do that. Shostakovich was the bridge between the great Russian music of the 19th century and the modernists of the 20th century with one major difference, you can listen to his music, utterly enthralled by it's savage beauty.
Read more
3 people found this helpful
Report abuse

BookwormEla
5.0 out of 5 stars Shostakovich beautifully served with magisterial performances
Reviewed in the United Kingdom on August 9, 2012
Verified Purchase
Shostakovich's music is a particular favourite of mine, but I had not heard his cello concerto before a performance at this year's (2012) Proms, where the cellist was Daniel Mueller-Schott. This recording is teamed with David Oistrakh's version of Shostakovich's Violin Concerto - making sense, since these works were originally written for these performers. I could wish for a bit more information in the sleeve notes, since they're just reproductions of the original LP notes, but that's a minor quibble.

The violin concerto was originally recorded in mono, though it's hard to tell - it's been beautifully re-mastered. Oistrakh's playing is authoritative and delicate, and he and the orchestra (the New York Phil) under Mitropolous make a good team.

The cello concerto is fantastic, very well served by Rostropovich's warm tone and technical ability, and the Philadelphia Orchestra conducted by Eugene Ormandy. The opening, with its solo cello introduction, is ridiculously catchy - almost playful - though there are undercurrents of antagonism and hints of something darker, as is usual for Shostakovich.

Steviefromworcesteruk
5.0 out of 5 stars Wonderful music making in a ballroom
Reviewed in the United Kingdom on April 20, 2012
Verified Purchase
This disc has the wonderful first recording of the Shostakovich 1st cello concerto with Rostropovich and the Philadelphia Orchestra with wonderful sound (just like the original LP which I used to have) - the supporting notes with the CD are fascinating revealing that the recording was made in a hotel ballroom - obviously of some size given the warm resonance - the horn solos are terrific!
Read more
One person found this helpful
Report abuse