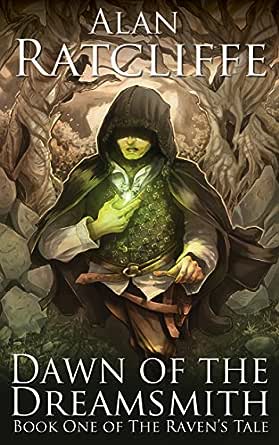 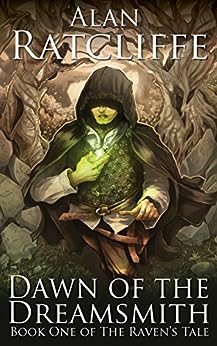 Dawn of the Dreamsmith (The Raven's Tale Book 1) Kindle Edition

4.6 out of 5 stars
4.6 out of 5
19 global ratings
How are ratings calculated?
To calculate the overall star rating and percentage breakdown by star, we don’t use a simple average. Instead, our system considers things like how recent a review is and if the reviewer bought the item on Amazon. It also analyzes reviews to verify trustworthiness.
Top reviews

Peter
5.0 out of 5 stars A Surprising Gem.
Reviewed in the United Kingdom on August 26, 2017
Verified Purchase
Disclaimer :

I have known the author for a very long time through an established community forum.
I had the book converted to & listened as an audiobook so I'm not going to write out any names of characters or locations relating to the book/story in case of incorrect spelling as well to not reveal too much information that may be spoiler for some readers.

After the prologue, I was interested in the alternative/inquisitive perspective to a fairy tale that author presented which had intrigued/tainted my expectation/curiosity of what was to come. From the first few chapters I felt strongly drawn in, engaged, wanting to know more about the world and the characters that made an instant impression & a few that don't.

The story or journey that you take along with the characters is like standing in a world of fog, I sometimes felt that I knew what was going to happen around the corner, only to be taken around another corner with your invested emotions laid out for whatever new emotion to consume them.

I rarely read fiction, but this was a wonderful surprise to read/listen to, even has a map of the North & South of the world which was another surprise but also gives you an idea to the detail the author put into this book. I highly recommend this book without hesitation.
Read more
2 people found this helpful
Report abuse

Snowy
5.0 out of 5 stars A superb debut novel
Reviewed in the United Kingdom on June 3, 2016
Verified Purchase
In the spirit of full disclosure, I know the author from a web forum I have posted on for many years (although we have never met). This was how I found out he had self-published his first book. As we have both posted there for years, and I am a keen fan of Fantasy literature, I bought a copy.

I have read a reasonable amount of self-published works, and while there are some gems you have to sift through a lot of turds to find them - as such my purchase was more a show of solidarity than a genuinely interested one and I wasn't expecting much. The quality of what he has written has frankly blown me away - to put such a well crafted and coherent work out solo, with no assistance from publishers, editors etc, is staggering.

There is a little clunky prose in literally the first couple of pages, but after that there is no recurrence, indeed the prose is of superb quality overall.

**No spoilers follow** The story told is of Cole, the eponymous Dreamsmith of the title. Events take place which force him out of his monastic life, which in turn leads him to meet Raven, a swordswoman with the goal of discovering what has become of her father. The story is quite epic in scope, but stays wedged between heroic and grimdark in the telling. Cole embarks upon a journey to try to uncover the reasons behind the events which forced him out of his old life, but rather than being an A to B journey, Ratcliffe the author includes vignettes along the way that are almost short stories buried within the novel. For those readers who have enjoyed roleplaying games, think of a small side quest or random encounter. Some of these stories have links to the make plot arc but others are self-contained, something that I thoroughly enjoyed.

The world Ratcliffe has built is a compelling one, with likeable and of course loatheable characters, and the debut sets up the sequel nicely with several unanswered questions.

Any lover of fantasy literature could do an awful lot worse than pick up a copy of this - if he can maintain the quality of writing moving forwards, I would not be surprised to see a spectacular career ahead. Top marks, all the more so for having done it unassisted.
Read more
One person found this helpful
Report abuse

Antony Stephenson
5.0 out of 5 stars and the warring princes Adelmar and Jarrod (you don’t like Jarrod full stop
Reviewed in the United Kingdom on September 23, 2016
Verified Purchase
Dawn of the Dreamsmith is an immensely readable, well-paced novel that lingers in your mind long after you've finished reading it. From its questioning first line ("Where does a story begin?") to the cliff-hanger ending, you know you’re in the hands of an author who has a tight rein on a briskly moving plot (there’s no padding in this book) and a writer who’s in control of his characters.

And it’s a vividly-drawn bunch of characters we’re asked to invest our time in. Our hero, Cole, is an engaging young man who, without really quite knowing how or why, has the power to enter other people's dreamworlds. We meet Raven, whose terrifying back story opens the novel and explains her taciturn, cautious nature; and the warring princes Adelmar and Jarrod (you don’t like Jarrod full stop, but you’re not exactly that keen on Adelmar – his nickname’s the ‘bloody prince’ – either). We’re introduced to the power-seeking Archon whose aim is to control the entire empire, and meet the saintly captain Brandt who, instead of turning a blind eye to another’s troubles, puts himself in real danger to discover the truth of what’s going on. And there’s plenty of others I've missed out from that roll call.

But for my money – and I bet yours too – perhaps the most memorable character is The Impending Grume a joyously unpleasant, foul-tempered boggit with a great line in invective – he’s forever telling everyone to 'fagorf' (go on, say it aloud). In fact if there’s a moral to this first book in the trilogy then it would be don’t expect a boggit to get you out of a prison cell once you’ve passed him through the cell bars. He’ll just... well if you want to find out what he does then fagorf and buy the book. It's worth every penny.
Read more
2 people found this helpful
Report abuse

michael spencer
5.0 out of 5 stars no faint praise...
Reviewed in the United Kingdom on December 23, 2016
Verified Purchase
I should say from the outset that fantasy is not generally my bag and I did not have high expectations for this book. The book was recommended to me otherwise I would not have read it, not wishing to plough through a million wannabes in search of a good read.
However, I was more than pleasantly surprised.
There were certainly moments for me in the work which felt immersive, which seemed to evoke place and ambience, something Tolkien achieved, but sadly lacking in so many voluminous (fantasy) potboilers. I felt the story was well-paced with a pleasing economy of writing style neither verbose or simplistic. The tale is related throughout the viewpoints of different characters in the book, which helps provide variety and "cliffhanging" moments that we can return to later.
The characters are engaging enough for a work of this kind (let's face it, as readers we spend a lot of time with them; see other reviews for description and synopsis), and there are few moments in character description and interaction that fail to add to a reasonable verisimilitude.
Overall, I would recommend this work as a welcome excursion into a created world; it is not damning with faint praise to point out how much I enjoyed this as (literally) "holiday reading" this year and a welcome break from "serious" matters, either in literature or life!
Read more
One person found this helpful
Report abuse

Luke Hinchliffe
5.0 out of 5 stars Highly original fantasy tale
Reviewed in the United Kingdom on July 13, 2017
Verified Purchase
Congrats Alan your book is GREAT! I read a lot of fantasy books when I was younger, this is a truly original story with great characters. I got really hooked reading this, can't wait for the next instalment! I've recommended to friends also.
Read more
2 people found this helpful
Report abuse
See all reviews
Fast, FREE delivery, video streaming, music, and much more
Prime members enjoy Free Two-Day Shipping, Free Same-Day or One-Day Delivery to select areas, Prime Video, Prime Music, Prime Reading, and more.
> Get started
Back to top
Get to Know Us
Make Money with Us
Amazon Payment Products
Let Us Help You
EnglishChoose a language for shopping. CanadaChoose a country/region for shopping.
© 2008-2020, Amazon.com, Inc. or its affiliates