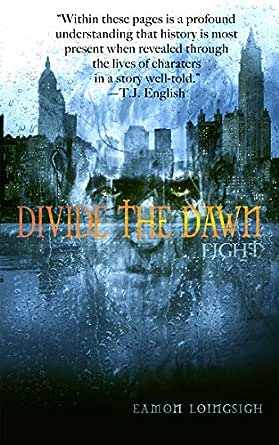 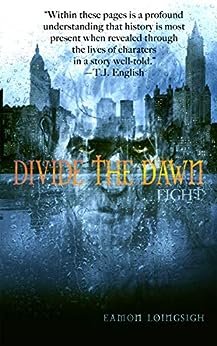 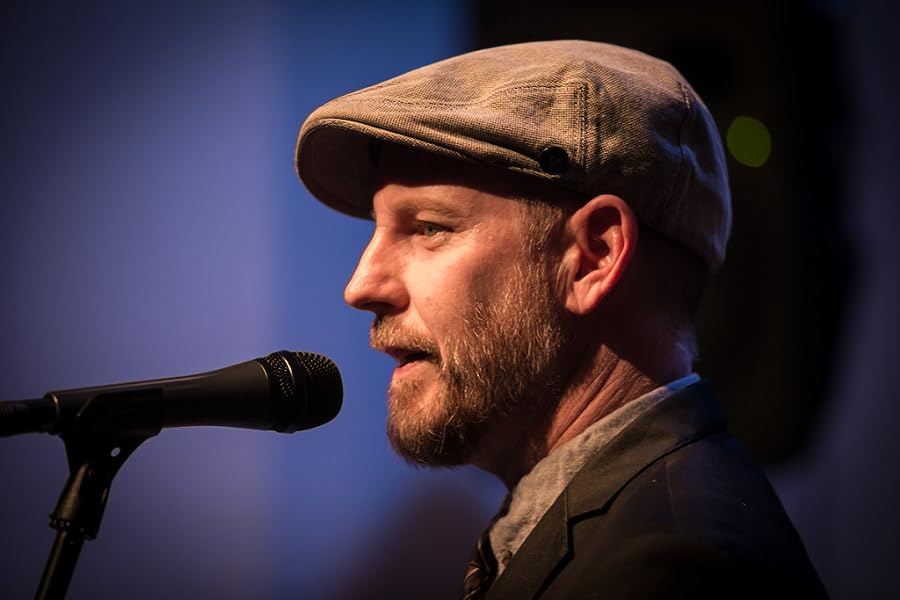 Erich Amerine
5.0 out of 5 stars Dark, Gritty, Bloody, and Perfect. A Must-Read Epic that lingers with you long after the final page.
Reviewed in the United States on April 18, 2020
Verified Purchase
Loingsigh crafts a stellar historical epic that transports the reader to the gritty streets of 1919 Brooklyn following WWI. The past is an ever-haunting presence that collides with fate and prophecy, creating a metaphorical and literal storm that will change the face of Irishtown forever. Loingsigh is a skilled storyteller who conjures the past in vivid detail and whose deft hand writes the fated characters into brilliantly brutal reality. Expansive in scope, the narrative explores several perspectives to bring the full story to life, creating a vast web of characters that must collide in bids for power, redemption, and revenge. Liam Garrity is a young member of the White Hand gang who, though young, has risen in the ranks to stand by White Hand leader, Dinny Meehan's side. Haunted by the Irish famine of his ancestors and desperate to remain loyal and good in a world of reckless depravity, Liam is forced to contend with his fate as prophesied by an ancient shamanistic storyteller, his love for family, and his loyalty to the gang. Also entangled in the bloody web is Anna Lonergan, the prophesied Queen of Irishtown, whose exacting and brutal temperament is as fiery as her auburn hair and who takes her fate into her own hands. While no one is safe from their own faults and gnarled flaws, the villains crash into the novel with brutal plans to seize power for themselves, ready to take down anyone who stands in their way. All hell breaks loose in the wake of an epic snowstorm when enigmatic war veteran, Wild Bill Lovett, presumed dead by all, returns in mysterious circumstances. Characters are expertly realized, full of flaws and contradictions and haunted by their pasts. Thos Carmody, also returning from war, is on a mission of revenge. Darby Leighton has a secret he must protect at all costs. Sadie Meehan must become her own hero to break away from her husband and the Brooklyn gangs and protect her young son. Disfigured psychopath, Gary Fookin' Barry, is a beast of a man who seems as unconquerable as he is inhuman. Jonathon G. Wolcott, director of the powerful Waterfront Assembly, with the newspapers and police force in his back pocket, is the man behind the curtain. Detective Culkin, perhaps the most ruthless of all, skulks around with his own ulterior motives; an egomaniac with a penchant for torture. And that isn't even every character that is fated to play a role in this intersecting tale of darkness of the past and the light of an almost-attainable future.

I first came across Divide the Dawn as a beta reader/developmental editor. From the first pages, the magic of young Liam's hunger for story is captivating, and later, as the novel expands with more characters in cinematic and gritty landscapes, the narrative refuses to let its grip on the reader diminish. The novel is an intense experience that transports you through time. Epic, mystical, and dripping with historical knowledge, I highly recommend Divide the Dawn to readers of Historical Fiction, lovers of Game of Thrones and Peaky Blinders, and anyone with a penchant for character-driven narrative and expertly layered storytelling.
Read more
2 people found this helpful
Helpful
Sending feedback...
Thank you for your feedback.
Sorry, we failed to record your vote. Please try again
Report abuse

Levi Asher
5.0 out of 5 stars "Divide the Dawn" opens a new literary universe in old Brooklyn
Reviewed in the United States on May 12, 2020
Verified Purchase
"Divide the Dawn: Fight" is my favorite of Eamon Loingsigh's historical novels about immigrant communities in Brooklyn after the end of World War I. As always, Loingsigh's eye is upon the Irish-American soul, which he explores lovingly as we see these strivers, survivors, winners, losers, fighters and diddicoys work out their sometimes twisted destinies. We also meet the Italians, the Jews, the white power brokers on the other side of the Brooklyn Bridge and Manhattan Bridge. This book is broadly peopled, and it does help to refer to the list of characters on the website to keep each of their fascinating historiees straight. Three characters emerge most distinctly from this story: first, the quietly heroic Dinny Meehan, a historical figure from Brooklyn history, the gang leader of the White Hand who deeply believes in a moral purpose underlying the universe of organized crime, and has the courage to fight for principles most people who surround him don't even understand. Then there is Anna Lonergan, another quiet heroine of operatic scope, who tries to navigate the impossible situations she has been dealt. Finally there is the novel's literary voice, the sometime narrator Liam Poe Garrity, "the thief of pencils", also struggling with impossible situations, who somehow senses that his role in the violent Brooklyn waterfront dramas is to follow in the paths of the shanachies and find words to capture the great moral tales of his milieu for future generations. This is a historical novel that aims for grand themes and also brings you delightfully into bygone New York City with tremendous accuracy and knowledge.
Read more
2 people found this helpful
Helpful
Sending feedback...
Thank you for your feedback.
Sorry, we failed to record your vote. Please try again
Report abuse

Allyson S.
5.0 out of 5 stars Timeless Fiction
Reviewed in the United States on May 17, 2020
Verified Purchase
When I think of books I want to read, this is the kind of book I think of. An intriguing story with intertwining narratives that captures characters’ perspectives while shining a supernatural light on the struggle to survive. Eamon Loingsigh writes a direct and poetic historical novel with extraordinary imagery of Brooklyn, N.Y. in 1919. There is violence and cruelty in this story but also tenderness and desire. The reader can see that the author has done his research to give us fact woven through his fun to read fiction. He wants us to learn our American history and to recognize the patterns that we seem destined to repeat. Characters are haunted by their respective ghosts and I kept wondering where this was all leading. We see how immigrants are treated by the assimilated, how women negotiate their safety and survival, how the poor and working class must fight to feed their families. I finished the book thinking that this is a story all of us can relate to and frankly wanting the story to continue.
Read more
2 people found this helpful
Helpful
Sending feedback...
Thank you for your feedback.
Sorry, we failed to record your vote. Please try again
Report abuse

slightlysmall
5.0 out of 5 stars An Immersive Look at Irish-Americans in the Early 20th Century
Reviewed in the United States on May 12, 2020
Verified Purchase
I had the privilege of reading an early version of this book, and I was blown away by the immersive worldbuilding, the snappy dialogue, the complex characters, and the craft in every sentence. Loingsigh delves into the complexities of Brooklyn in the early 20th century so well I felt like I was there.
Read more
Helpful
Sending feedback...
Thank you for your feedback.
Sorry, we failed to record your vote. Please try again
Report abuse

eddie chow
5.0 out of 5 stars I couldnt put it down.
Reviewed in the United States on April 19, 2020
Verified Purchase
I was going to just read the first chapter to get a feel for the book and ended up reading eight. Very cool story and crazy surprises.
Read more
2 people found this helpful
Helpful
Sending feedback...
Thank you for your feedback.
Sorry, we failed to record your vote. Please try again
Report abuse
Load more international reviews

Matt O'Handley
5.0 out of 5 stars Loved It
Reviewed in the United States on April 20, 2020
Verified Purchase
Loingsigh creates a world of deeply interwoven characters in this gritty story with moments of real beauty. Great Historical Fiction gets me attached to the characters (for better or worse) and drives me to do further research on eras and settings.

when I can only put a book down so that I can dig deeper into that setting. In this case- Irish revolutionaries, the Great Famine and other events that set the tone of this gritty & beautiful story.
Read more
Helpful
Sending feedback...
Thank you for your feedback.
Sorry, we failed to record your vote. Please try again
Report abuse

Amazon Customer
5.0 out of 5 stars Great book!
Reviewed in the United States on April 24, 2020
Verified Purchase
Great read! I stayed up way too late every night reading this page-turner. If you haven’t read anything by Eamon Loingsigh yet, now is the time. Perfect way to spend your time in quarantine, with such great escapes - thank you, Eamon!
Read more
Helpful
Sending feedback...
Thank you for your feedback.
Sorry, we failed to record your vote. Please try again
Report abuse

Tucker Hennemuth
5.0 out of 5 stars Great read
Reviewed in the United States on April 20, 2020
Verified Purchase
This book is 5 stars from beginning to end. The author does a great job connecting me with the characters and making them come alive. I will be checking out some of his other novels. Thank you Eamon. You have gained a lifelong fan.
Read more
Helpful
Sending feedback...
Thank you for your feedback.
Sorry, we failed to record your vote. Please try again
Report abuse

JL
5.0 out of 5 stars Incredible. Cannot recommend enough.
Reviewed in the United States on April 19, 2020
Verified Purchase
Stellar prose, expertly crafted narrative and a story arc that engages throughout. Highly recommend to anyone looking for a great, enthralling read!
Read more
Helpful
Sending feedback...
Thank you for your feedback.
Sorry, we failed to record your vote. Please try again
Report abuse

Amazon Customer
4.0 out of 5 stars interesting book about history of irishtown in brooklyn,ny
Reviewed in the United States on May 11, 2020
Verified Purchase
Did not know about irish gangs in brooklyn.The hard times that they went through,and the fighting that went on.
Read more
Helpful
Sending feedback...
Thank you for your feedback.
Sorry, we failed to record your vote. Please try again
Report abuse