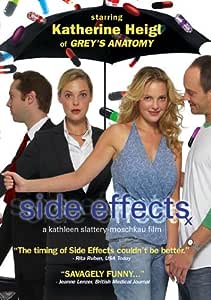 A well-intentioned film about a young pharmaceutical rep who is torn between earning a good living and living a good life, Side Effects tells the story of Karly Hert, portrayed by Katherine Heigl (Grey's Anatomy, Roswell), who also executive produced the project. Karly works for a company whose motto is "To protect and prolong life." But what they really mean is prolong their own) lives by making as much money as possible. Based on writer-director Kathleen Slattery-Moschkau's previous career as a legal pill pusher, Side Effects is a comedy with an agenda. Its goal is to educate viewers about the dangers of an uneducated sales force telling doctors which drugs to prescribe--regardless of the side effects. While Slattery-Moschkau is heavy handed in her delineation of who is good (the patients) and evil (the drug reps), her semi-autobiographical Karly is relatable. When we meet her, Karly has no patience with her pod-like boss. When her employer rhetorically asks, "How do you think I ended up in management?" Karly zings back, "There are rumors." But as she herself moves up in the company and earns expensive perks, Karly is seduced. Heigl gives an earnest, likable performance, especially during scenes with Lucian McAfee, who plays her boyfriend Zach. While her Norma Rae moment at the end of the film doesn't ring quite true, it gives the movie a fitting ending that ties together all the loose ends. --Jae-Ha Kim

D. Eckman
1.0 out of 5 stars Little plot, poor script, lame direction and editing, bad everything
May 7, 2013 - Published on Amazon.com
Verified Purchase
Don't let other viewers' multiple stars fool you. Except for Heigl herself, there's nothing to recommend this movie. We realized early on that it was intended as an expose of the pharmaceutical industry (which is fine), but it only parodied how predatory that industry can be despite the good some products seem to do. With a better screenplay, better direction, better everything, the premise could have been dramatic and exciting, but instead the movie dragged through a numbing series of short, disjointed clips and situations with no resolution, except that girl finally quits her job, and boy and girl get together in the end. The credits at the end brag about how cheap the movie was to make, and the production values certainly showed that: For example, hotel rooms serve as offices and business conference rooms (watch for the little viewer in the door), and a home improvement display serves as the house where our star lives. Save your money and watch something more educational and entertaining-- almost everything else is.
Read more
5 people found this helpful

L-Rod
5.0 out of 5 stars Excellent film, powerful message!
July 20, 2017 - Published on Amazon.com
Format: DVDVerified Purchase
This is an excellent film with superb actors, but most importantly it has a powerful message that we all need to hear. It has wonderful comedic moments, as well as heartfelt scenes.
Read more

MissPammy
4.0 out of 5 stars Everyone needs to see this film
November 2, 2012 - Published on Amazon.com
Verified Purchase
This movie sends a message I have long realized the public needs to understand, and it does a good job of hitting the highlights for mass consumption. There is a lot more to pharmaceutical company corruption than this movie portrays, but it certainly reveals more than most people are aware of before seeing it. I am concerned when friends and neighbors take prescription drugs without taking into account the side effects. Even though there is plenty of information on the Internet about people's experiences with prescription drugs, few people take the time to research them before getting their prescriptions filled. Even more concerning, few people realize that even their doctors don't know most of the really serious side effects. This film brings awareness to the problem of the real dangers of drugs and the corruption of pharmaceutical companies. I would suggest digging even deeper, but this movie is a great start. Heigl is great as always, and although this is a low-budget film and does look it, it's worth watching and has a good storyline. Most importantly, if you get the message like Heigl's character does in the movie, it could save your life or that of someone you love.
Read more
One person found this helpful

Matt Conner
4.0 out of 5 stars So bad, it's good
June 26, 2006 - Published on Amazon.com
Verified Purchase
This movie has a lot of strikes against it - the different "locations" are frequently the same room with furniture rearranged. Narrative devices like text on screen or interlude interviews are picked up and abandoned at random. Subplots (in particular, those involving Karly's best friend and the rest of her family) are never resolved, and the dialogue is frequently clunky exposition of company rhetoric. Many of the supporting actors are obviously not in the same league as the main players, and it's not hard to predict the plot points of the film.

But the movie has heart and a winning lead actress in Katherine Heigl, and this movie has become one of my guilty pleasures. As a medical professional, I have heard all of the arguments for and against drug reps as depicted in this film, but the scenes where Karly shows how hard it is to do her job were particularly convicting. Corporate ethics aside, these are personal issues, and most of these people are just trying to pay the bills. The movie really humanizes the industry reps, even if the characters themselves aren't exactly three-dimensional.

And yes, Katherine Heigl takes her top off. Twice. I would consider it exploitative except that she executive produced this movie, and in that case, if you've got it, flaunt it. The brief nudity does fit logically into the scenes.

In the end, I recommend watching this movie with as light a heart as possible (and a little vodka, if you've got it). It's not revolutionary, but it raises good discussion points, and it will give you a fix until you can see Katherine Heigl on the far superior Grey's Anatomy.

Read more
15 people found this helpful
Go to Amazon.com to see all 87 reviews 3.2 out of 5 stars
Fast, FREE delivery, video streaming, music, and much more
Prime members enjoy Free Two-Day Shipping, Free Same-Day or One-Day Delivery to select areas, Prime Video, Prime Music, Prime Reading, and more.
> Get started
Back to top
Get to Know Us
Make Money with Us
Amazon Payment Products
Let Us Help You
EnglishChoose a language for shopping. CanadaChoose a country/region for shopping.
© 2008-2020, Amazon.com, Inc. or its affiliates