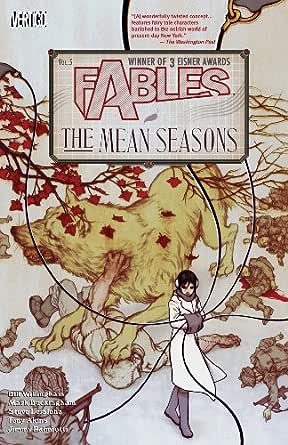 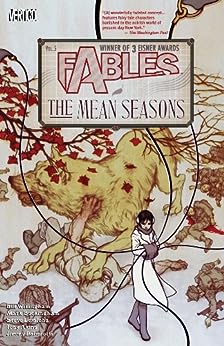 Fables, the comic about fairy-tale characters ("Fables") living in exile in Manhattan and upstate New York, started with a jaunty mystery (Legends in Exile, 2003) full of irony, but it has steadily darkened. Some major figures--Bluebeard, for instance--have been killed, and in March of the Wooden Soldiers (2004), the Manhattan enclave was attacked by forces of the Adversary, which drove them from their home world. The title story here depicts the year after the attack. Summer sees the birth of Deputy Mayor Snow White's sextuplets (the father is Sheriff Bigby Wolf); fall, Prince Charming's election as mayor; winter, bad decisions by the new administration; and spring, plans to counterattack the Adversary. Two shorter pieces show Bigby Wolf on a secret mission during World War II and Cinderella entrapping a Fable who is collaborating with the Adversary. Tony Akins draws the shorter stories with less detail than Mark Buckingham does the big one; both uphold Fables' snappy good looks. Ray Olson
Copyright © American Library Association. All rights reserved --This text refers to the paperback edition.

Bill Willingham has been writing, and sometimes drawing, comics for more than 20 years. During that time, he's had work published by nearly every comics publisher in the business, and he's created many critically acclaimed comic book series, including Elementals, Coventry, Proposition Players, and of course the seminal Vertigo series Fables, as well as its spin-off series Fairest, Jack of Fables and The Literals. His work has been nominated for many awards, including the Eisner, Harvey, and Ignatz comic industry awards and the International Horror Guild award. He lives somewhere near a good poker room.

Born in 1966 in the English seaside town of Clevedon, Mark Buckingham has worked in comics professionally for the past twenty years. In addition to illustrating all of Neil Gaiman's run on the post-Alan Moore Miracleman in the early 1990s, Buckingham contributed inks to The Sandman and its related miniseries Death: The High Cost of Living and Death: The Time of Your Life as well as working on various other titles for Vertigo and Marvel through the end of the decade. In 2002 he took over as the penciller for Bill Willingham's Fables, which has gone on to become one of the most popular and critically acclaimed Vertigo titles of the new millennium. When not in Clevedon, Buckingham can be found with his wife Irma in the Asturias region of northern Spain. --This text refers to the paperback edition.
click to open popover

4.6 out of 5 stars
4.6 out of 5
77 customer ratings
How does Amazon calculate star ratings?
Amazon calculates a product’s star ratings using a machine learned model instead of a raw data average. The machine learned model takes into account factors including: the age of a review, helpfulness votes by customers and whether the reviews are from verified purchases.
Top reviews

Mellowie
5.0 out of 5 stars such a good series
Reviewed in Canada on May 18, 2014
Verified Purchase
This series is hands down my favourite. Just keeps getting better and better. For those that crave something otger then superheros check this out
Read more
Helpful
Comment Report abuse

Nicola Mansfield
HALL OF FAMETOP 1000 REVIEWERVINE VOICE
4.0 out of 5 stars Good but Not my Favourite
Reviewed in Canada on September 9, 2009
Reason for Reading: Next in the series.

Comments: The book starts off with a single issue that features Cinderella. It feels purposeless at first but a little secret is revealed that later comes into play with a slight significance. Next is a two-issue story line featuring Bigby which flashes back to his World War II days and an ultra secret mission that he participated in. This was a great story line that introduced a new character who is living in Fabletown but I'm not sure whether he'll show up again. Then comes the meat of this volume with the continuation of the main storyline as the rest of the book follows "The Mean Seasons". Snow White gives birth and the election takes place. Both events cause a slew of fallout and meanwhile those in charge decide it is time to prepare to take on The Adversary.

Not one of my favourite issues what with the jumping around. Cinderella is not a character I like, but I love Bigby and his feature storyline was a lot of fun. The main plot was mostly sideline stories, which I enjoyed, but I am hoping to see the main story arc move forward in the next volume. (And I've received info that it does. So I am really looking forward to Volume 6). Overall, a fun volume. I enjoyed all the storylines except the first isolated story about Cinderella.

C. Gans
5.0 out of 5 stars Fables = XOXO
Reviewed in Canada on April 9, 2009
If you are a fan of fairytales, adventures or comics, Fables is for you. I am so in love with this series!! Awesome stories, delicious artwork.
Read more
Helpful
Comment Report abuse
See all reviews from Canada

Hannah Lynn, Author of the hilarious and uplifting novel, The Afterlife of Walter Augustus
5.0 out of 5 stars And the search for happy ever after continues
Reviewed in the United Kingdom on October 31, 2014
Verified Purchase
Yet another great instalment of the Fables saga. Lots of new beginnings for the fables; Bigby and Snow becoming parents, a new mayor, Beauty and the Beast moving up in the world and the introduction of a long lost papa. Lacking the action and excitement of the last couple, but slowly and steadily building the tension towards far greater things to come. Still one of my favourite series.
Read more
One person found this helpful
Helpful
Sending feedback...
Thank you for your feedback.
Sorry, we failed to record your vote. Please try again
Report abuse

Matt
5.0 out of 5 stars sustained excellence
Reviewed in the United Kingdom on January 19, 2015
Verified Purchase
Another captivating and engrossing chapter in the ongoing story of the fables. Exploring the backgrounds of some characters and how this affects the present. There are big changes in New York and you get the feeling that this is all setting things up for a very big action packed next issue.
I have loved every part of this series, from the art to the amazing imagination, one of my favourite comic properties!

Paul Brookes
5.0 out of 5 stars It Moves On Well
Reviewed in the United Kingdom on November 5, 2013
Verified Purchase
I am reading all the tales in sequence and enjoy their shifting nature. No character or situation can be deemed permanent. The illustrations are beautifully drawn and rendered and the story flows easily. I cannot wait to read the next volume as I am.involved with all the characters.
Read more
Helpful
Sending feedback...
Thank you for your feedback.
Sorry, we failed to record your vote. Please try again
Report abuse

Kindle Customer
5.0 out of 5 stars Great item
Reviewed in the United Kingdom on December 26, 2015
Verified Purchase
Bought as a Christmas present. What can I say, the teenage lad loved it and it looked a good quality comic book.
Read more
Helpful
Sending feedback...
Thank you for your feedback.
Sorry, we failed to record your vote. Please try again
Report abuse
Load more international reviews

Jenny McIntyre
5.0 out of 5 stars Fables TP Vol 05 The Mean Seasons - Tony Akins
Reviewed in the United Kingdom on February 1, 2013
Verified Purchase
This is yet another book in the series which my son collects. He just loves the artwork as well as the storyline. Great value apparently.
Read more
Helpful
Sending feedback...
Thank you for your feedback.
Sorry, we failed to record your vote. Please try again
Report abuse

Charlie Fitzmaurice
5.0 out of 5 stars An Excellent chapter in the Fables Universe
Reviewed in the United Kingdom on March 28, 2015
Verified Purchase
Phenomenal story.
Really cool to see some of Bigby's exploits during WW2 as well as the continuing drama of our favourite fairy tale creatures.
Highly recommended.

Angela Ewing
5.0 out of 5 stars Five Stars
Reviewed in the United Kingdom on March 28, 2015
Verified Purchase
Amazing - a must read!
Read more
Helpful
Sending feedback...
Thank you for your feedback.
Sorry, we failed to record your vote. Please try again
Report abuse

debsy100
5.0 out of 5 stars good read!!
Reviewed in the United Kingdom on September 12, 2014
Verified Purchase
buy for my son and husband they love these books
Read more
Helpful
Sending feedback...
Thank you for your feedback.
Sorry, we failed to record your vote. Please try again
Report abuse
Load more international reviews

Mr. N
5.0 out of 5 stars Wicked awesome
Reviewed in the United Kingdom on June 26, 2012
Verified Purchase
The Fables series is simply fantastic. The further you delve into it the better you can see the genius of Willingham, Buckingham and co! Highly entertaining stuff!
Read more
Helpful
Sending feedback...
Thank you for your feedback.
Sorry, we failed to record your vote. Please try again
Report abuse

Aigars
5.0 out of 5 stars Five Stars
Reviewed in the United Kingdom on October 15, 2015
Verified Purchase
Fables does not disappoint.
Read more
Helpful
Sending feedback...
Thank you for your feedback.
Sorry, we failed to record your vote. Please try again
Report abuse

Jakub Kviz
5.0 out of 5 stars Getting better and better
Reviewed in the United Kingdom on January 25, 2014
Verified Purchase
One of few comic book series Fables are getting better with every issue.

Everyone who likes original stuff should give it a try!
Read more
Helpful
Sending feedback...
Thank you for your feedback.
Sorry, we failed to record your vote. Please try again
Report abuse