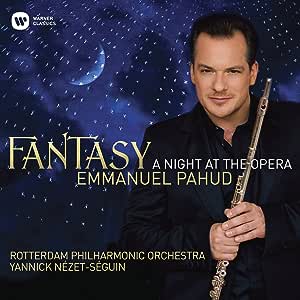 Fantasy-a Night at the Opera

following forays into the modern, with Dalbavie and Pintscher, and into the baroque, with Bach's complete sonatas, Emmanuel Pahud now pairs up with the exciting young Canadian conductor, Yannick Nézet-Séguin, in a program of virtuoso transcriptions based on operatic themes. `Night at the Opera' features variations on Carmen, the Magic Flute, Rigoletto and others are coupled with some of the familiar flute solos from opera, including the entr'acte from Carmen and Gluck's Dance of the Blessed Spirits. Also included is Lensky's aria from Eugene Onegin, arranged by Guy Braunstein. Juliette Hurel, solo flute of the Rotterdam Philharmonic, joins Pahud in the works for two flutes. Emmanuel Pahud is one of today's most exciting and adventurous musicians, demonstrates his mastery of and sympathy for music composed over nearly three centuries. Principal Flute of the Berliner Philharmoniker since the age of 22, with the exception of a year-and-a-half-long sabbatical, Pahud has also appeared as soloist with many of the world's other leading orchestras under such conductors as Abbado, Rattle, Zinman, Maazel, Gergiev, Gardiner, Harding, Järvi, Pinnock, Jordan and the late Mstislav Rostropovich. As a recitalist, Pahud collaborates with Eric Le Sage, Yefim Bronfman and Hélène Grimaud and he performs jazz with Jacky Terrasson. Pahud appears regularly at the major festivals in Europe, North America and the Far East.

4.4 out of 5 stars
4.4 out of 5
12 global ratings
How are ratings calculated?
To calculate the overall star rating and percentage breakdown by star, we don’t use a simple average. Instead, our system considers things like how recent a review is and if the reviewer bought the item on Amazon. It also analyzes reviews to verify trustworthiness.
Top reviews

Kyo
5.0 out of 5 stars Kyo
Reviewed in Japan on November 26, 2012
Verified Purchase
さすがに華麗な演奏で、とても素敵でした。パユのCDを買ったのは随分と久しぶりですが、買って良かったと思うCDです。
Read more
Report abuse
Translate review to English
See all reviews
Fast, FREE delivery, video streaming, music, and much more
Prime members enjoy Free Two-Day Shipping, Free Same-Day or One-Day Delivery to select areas, Prime Video, Prime Music, Prime Reading, and more.
> Get started
Back to top
Get to Know Us
Make Money with Us
Amazon Payment Products
Let Us Help You
EnglishChoose a language for shopping. CanadaChoose a country/region for shopping.
© 2008-2020, Amazon.com, Inc. or its affiliates