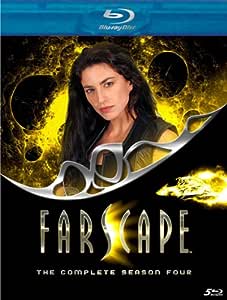 A great deal of time passes between Seasons 3 and 4 which helps develop the show’s extraordinary characters even more fully. More recent additions to the crew, including Noranti and Sikozu, as well as a shocking former enemy, play major roles in a series of thrilling, surreal, and nearly lethal adventures.

Season 4 features some of the most imaginative science fiction seen in the series so far, while always remaining true to the extraordinary characters, passionate chemistry and whip-crack dialogue that have become FARSCAPE signatures. This concluding season of FARSCAPE – the only one filmed in anamorphic widescreen – shines like never before in glorious Blu-ray.

BONUS FEATURES:
•Farscape: A Look Back – A BRAND NEW documentary featuring the cast and crew reminiscing about the experience and legacy of the sci fi classic. Presented in HD.
•ARCHIVAL DOCUMENTARY: Farscape: The Story So Far.
•FROM THE ARCHIVES: ON THE LAST DAY – FARSCAPE WRAP SPEECH FROM DAVID KEMPER
•THREE INSIDE FARSCAPE FEATURETTES: Villains, Visual Effects and Save Farscape.
•3 AUDIO COMMENTARIES
•Listening In with composter Guy Gross featurettes for 4 episodes
•Video Profiles of Creator/Executive Producer/Writer Rockne S. O’Bannon and Executive Producer/Writer David Kemper
•DELETED SCENES

DISC 2: Natural Election / John Quixote / I Shrink Therefore I Am / A Prefect Murder / Coup By Clam