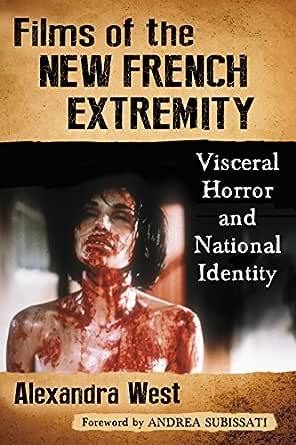 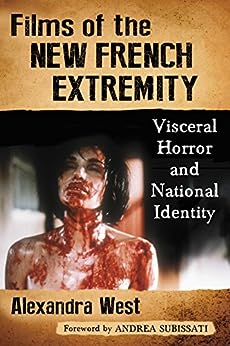 "West's persuasive text makes you want to go back and revisit this body of work from her perspective"--Video Watchdog; "quite a profound and thorough analysis of the extreme French art house and horror films of this movement"--Fangoria; "West's book is so tres fantastique that I wish it were a reference guide that covered hundreds of films"--Flick Attack; "fans and scholars of the New French Extremity genre will welcome Alexandra West's Films of the New French Extremity...a timely and well-researched examination of the darker side of French cinema. West's analysis is, thankfully, readable and relatable, avoiding the often suffocatingly dull academic prose found in genre studies. Films of the New French Extremity will most likely serve as the analytic lightning rod for fans and scholars of the NFE for some time to come...the first comprehensive overview and timeline of one of the most challenging genres to emerge in recent years"--Bright Lights Film Journal; "a comprehensive examination"--ProtoView. --This text refers to the paperback edition.

Alexandra West has written about genre films for The Toronto Star, Rue Morgue Magazine and Offscreen Film Journal. In 2012, she co-founded the Faculty of Horror podcast, exploring the films’ analytical side. She lives in Toronto, Ontario. --This text refers to the paperback edition.

4.5 out of 5 stars
4.5 out of 5
17 global ratings
How are ratings calculated?
To calculate the overall star rating and percentage breakdown by star, we don’t use a simple average. Instead, our system considers things like how recent a review is and if the reviewer bought the item on Amazon. It also analyzes reviews to verify trustworthiness.
Top reviews

Amazon Customer
5.0 out of 5 stars An incredibly well-researched and intelligent look at the New French Extremity genre
Reviewed in Canada on October 12, 2016
What a phenomenal study of an under-analysed sub-genre of horror!

Just like the works she loves up throughout this rich and well constructed text, Ms. West does not hold any punches going through the titles and the end result is one riveting, smart and masterful piece of film criticism.

The genre is understandably a hard one for most mainstream audiences to approach, but Ms. West makes sure at all times that her reader is provided with the necessary historical, biographical, and socio-political background to sustain her arguments. A must-read primer for anyone interested in expanding their filmic horizons and a great resource to go back to for a second pass after having watched the works cited.

As a companion piece, anyone interested in insightful, inclusively feminist discussions of the world(s) of horror cinema would do well to check the amazing catalogue that Ms. West and co-host Andrea Subissati have assembled through their work on the Faculty of Horror podcast. It's mind-blowingly great!

Amazon Customer
5.0 out of 5 stars I would strongly recommend this book for fans of horror and people more ...
Reviewed in the United Kingdom on August 17, 2016
Verified Purchase
I came to this book via The Faculty of Horror podcast, and because of that I had high expectations for the quality of the discourse. They were definitely met. West writes accessibly, which makes her observations as clear to follow as they are illuminating.

I would strongly recommend this book for fans of horror and people more generally interested in the matter of French (and, more broadly, European) culture.
Read more
Report abuse

RickMurray666
5.0 out of 5 stars Great book .listen to her podcast faculty of horror
Reviewed in the United Kingdom on February 13, 2017
Verified Purchase
Very informative but too short for me .Alex 's podcast also covers French extremism,go listen,xxxxxxxxxx.

Stephen Slade
2.0 out of 5 stars Superficial
Reviewed in Japan on February 9, 2019
Verified Purchase
An OK read for someone new to topic, but lacks real depth in research and original observations.
Read more
Report abuse

titania86
5.0 out of 5 stars Insight and context for a notorious and magnetic horror subgenre
Reviewed in the United States on May 17, 2017
Verified Purchase
The New French Extremity film movement has been popular for years because of its tendency to push the boundaries of cinema even beyond the horror genre. These films are typically nihilistic with extreme violence, social commentary, and other taboo that most consider beyond the pale. Alexandra West's book starts out with a history of France with turmoil, resistance, tyranny, and blood soaking it all. It's completely the opposite of what people typically view as France: romance, the city of lights, and idyllic beauty. Their history (and present in some cases) of beheadings, fascism, concentration camps, and racism isn't widely known and not represented in their film. Charles de Gaulle famously advocated moving forward without acknowledging or coming to terms with French support of the Nazis during the occupation, causing any film to do so fail. Many of the films in this genre acknowledge this denial and cite it as the cause of reactionary attitudes and politics as well as the resulting public unrest and riots. I found this fascinating as I knew about Vichy France, but never studied the events that followed.

Then, West covers a brief history of French cinema, starting from the very first horror movie ever created, The Haunted Castle in 1896. Later, horror in France was characterized by surrealism and the conflict surrounding self and identity, especially after World War II. The New French Extremity movement took real life fears and made them even more horrific. Interior struggles become exterior and irrevocably damage the world around the characters. They also take the buried history of France, especially the atrocities of WWII that went largely unacknowledged, and make it a focus. Many of the films have that seed of racism, fascism, and violence either festering over years and growing or exploding. Many of the films have civil unrest in the background usually as a response to a conservative government. She mentions Antonin Artaud's Theater of Cruelty, which uses theater as a means of confronting harsh realities for an uncomfortable catharsis instead of escaping into fantasy in idyllic films such as Amelie and The Artist. The concept describes this movement well. These directors take the formula for horror films and alter them in unsettling ways to make something unique.

The first wave of French Extremity was based in art house films by the likes of Gasper Noe, Catherine Breillat, Claire Denis, Marina de Van among others. The most notorious of these was Irreversible, which many don't consider horror at all. It has all of the elements of this movement in the extended rape scene, its brutal violence, and its nihilistic ending. Its homophobia and racism were frequently called out by critics, but proponents argued that they are both an intrinsic part of France and its history portrayed honestly. Breillat's Romance showed that family isn't the happily ever after everyone expects in the face of an unstable and insecure society and critiques society's view and expectations of women. Palo X has a successful man rejecting the society that valued him and has the viewers act as observers rather than judges of his morals. In Baise Moi, lower class women inflict violence that they have become accustomed to onto others in a Thelma and Louise-esque road trip. My personal favorites of this sub-genre are the cannibal films Trouble Every Day and In My Skin. They act as this movements version of body horror. The former centers on love and desire as a disease and the other on isolation in success and the need for connection. Both have shockingly tender moments among their carnage that I respond to.Many of these films subvert expectations in the horror genre and in gender norms while pushing the boundaries of cinema and audiences.

The last evolution of the genre takes conventions of American horror films and infuses them with the brutality, nihilism, and social commentary of the art house wave. The first and most iconic is Alexandre Aja's High Tension, which takes a slasher film and twists it. I found the twist to be homophobic in nature, but West reads it differently. Although I don't agree with her, it shows how complex these films are and how even a decade later they are still being hotly debated. Calvaire is a particularly odd film that almost feels like it doesn't belong and the film I liked the least of this genre. West's observations let me see another side of the film. Xavier Gens' Frontier(s) is my favorite of the later wave. I had seen it years ago and dismissed it as a Texas Chainsaw ripoff, but I gave it another chance and it has so much more going on than that. The historical implications make the film so much more tragic and upsetting. Martyrs is the most notorious entry and even West can't convince me that it isn't poorly constructed, misogynistic, exploitative, and ridiculous. I do enjoy her reading and interpretation of it even if I disagree. For instance, although the plot is linear, the way it deals with trauma isn't. It starts with the aftermath, follows with the trauma, and ends capture and torture. Its condemnation of religion and the exposure of its inhuman sides set it apart from other religious themed films that usual uphold religion's patriarchal system. Inside is another amazing film, but the added critique of the media and their portrayal of violence and conservatism makes the film even deeper than I thought.

I have seen and reviewed many of these films throughout the years on my blog because I feel so strongly about them. Whether I find them problematic or I absolutely love them, I keep returning to them because they have a singular element that combines violence, social commentary, and true emotions. I see the echoes of this movement in more recent films like Raw, which isn't as extreme, bleak, or violent, but shares a lot with films like In My Skin and Trouble Every Day in breaking gender and societal norms through cannibalism and body horror. Although I didn't entirely agree with West's reading of a few of the films, she still gave wonderful insights on all of the films as well as a look into the cinematic history, social history, and hidden conflicts within France that give much needed context to these films. I will definitely be watching more of these films as I didn't know some of them even existed before reading. I hope this book with help other viewers expand their view of this genre beyond the most popular films.
Read more
4 people found this helpful
Report abuse
See all reviews
Fast, FREE delivery, video streaming, music, and much more
Prime members enjoy Free Two-Day Shipping, Free Same-Day or One-Day Delivery to select areas, Prime Video, Prime Music, Prime Reading, and more.
> Get started
Back to top
Get to Know Us
Make Money with Us
Amazon Payment Products
Let Us Help You
EnglishChoose a language for shopping. CanadaChoose a country/region for shopping.
© 2008-2020, Amazon.com, Inc. or its affiliates