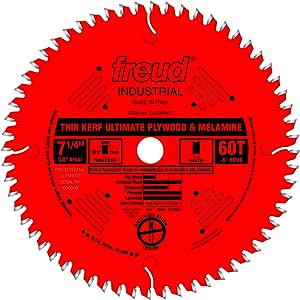 Freud's industrial saw blades are carefully crafted using the best materials, the most innovative designs, and the industry's most sophisticated manufacturing processes. Every blade is specifically designed for superior performance and maximum life. Select the best blade for your application from a wide variety of designs and sizes, all featuring Freud's unique coatings and TiCo Hi-Density Carbide.

TiCo Hi-Density carbide is a specially formulated, highly compact Titanium Cobalt Carbide engineered and manufactured by Freud to maximize performance on all Freud cutting tools. Designed in Freud research and development laboratories, Freud's TiCo Hi-Density carbide is scientifically developed using Titanium Carbide, Cobalt and Tungsten (as well as proprietary elements), to produce a supreme product. Carbide size is extremely important when it comes to sharpness as well as the rate at which an edge wears. The larger the carbide grain, the faster an edge will wear. While standard carbides measure as large as 5 microns, and an advanced micrograin carbide can measure 1 micron, Freud's TiCo Hi-Density Carbide is miniscule in comparison at .8 microns, with a laminate blend as small as .4 microns.