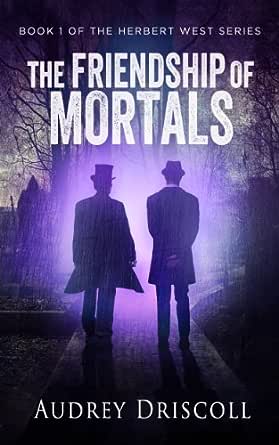 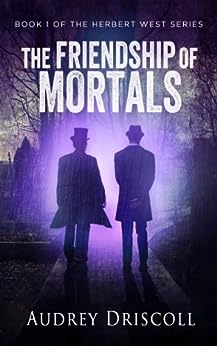 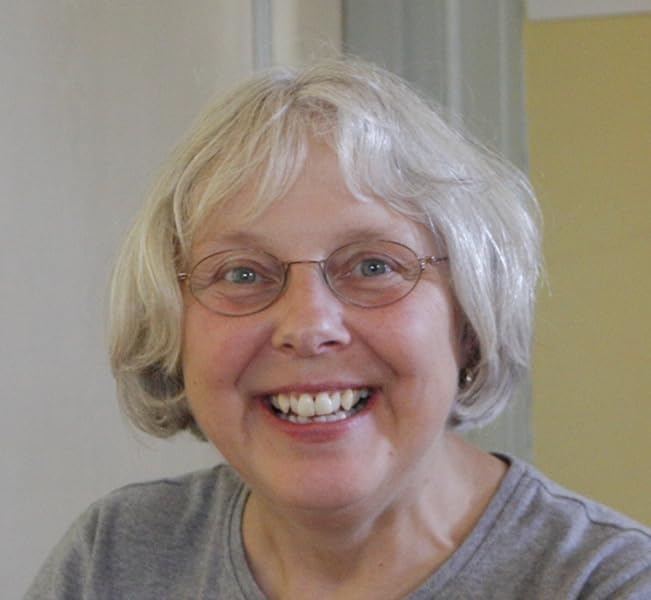 Audrey Driscoll is a librarian and cataloguer (but not at Miskatonic University). She lives, writes and gardens in Victoria, British Columbia. --This text refers to the paperback edition.
click to open popover

4.4 out of 5 stars
4.4 out of 5
11 global customer ratings
How does Amazon calculate star ratings?
Amazon calculates a product’s star ratings using a machine learned model instead of a raw data average. The machine learned model takes into account factors including: the age of a review, helpfulness votes by customers and whether the reviews are from verified purchases.
Top Reviews

William M. Dean
5.0 out of 5 stars Great characters, great ideas, vivid descriptions.
Reviewed in Canada on March 22, 2020
Verified Purchase
I'm an independently-published author myself and am constantly looking for good indie books. Depressingly, I have found very few. But, this is one of them! This novel takes place in the early 1900's and the writing style very much reflects the era. The pace is calm and, for some, might seem plodding, but the characters are very well drawn, the ideas intriguing and the descriptions vivid. If you like the setting and the storyline, you should love this book. (Also, I thought, it was an extremely good value for the price.)
Read more
Helpful
Comment Report abuse
See all reviews

BG
5.0 out of 5 stars Brilliant, philosophical expansion of HPL's short story
Reviewed in the United States on February 13, 2018
Verified Purchase
An extremely clever and skillfully written reimagining of Lovecraft's episodic "Herbert West" stories. Driscoll does a marvelous job of imitating Lovecraft's style in her descriptions and pacing. She also explores quite thoroughly the psychological motivations of West and the narrator, as well as other characters of Driscoll's own invention, all of whom are quite well-drawn.

In the first three-quarters of the book, the different strains of horror, romance and philosophy are balanced perfectly. In the last quarter the philosophical aspects took center stage, and the story became a bit more of a literary fantasy. It still felt like a Lovecraftian story, but perhaps more in the vein of the Randolph Carter tales, whereas the first three quarters were more reminiscent of "Charles Dexter Ward".

I had a few quibbles--the pacing is slow (though that is in keeping with HPL's style), and some readers may be disappointed that character development takes precedence over plot in the last act. Overall, however, these are minor points that are entirely overshadowed by the magnitude of what Driscoll has accomplished: while remaining faithful to HPL's distinctive style, she has created a compelling tale of literary horror that fleshes out his thinly-sketched characters in careful and nuanced detail.
Read more
One person found this helpful
Helpful
Sending feedback...
Thank you for your feedback.
Sorry, we failed to record your vote. Please try again
Report abuse

TermiteWriter
5.0 out of 5 stars Mysteries of darkness and light
Reviewed in the United States on September 15, 2018
Verified Purchase
I’m familiar with Lovecraft only by reputation, since I’m generally not into horror. And after looking at some of the other reviews, I think that’s an asset when you read The Friendship of Mortals. If you come with no preconceptions, you won’t be disappointed that the author has not written an imitation of Lovecraft. Instead, she’s extracted some concepts and made a whole new tale.
The book has a lot of things I like – libraries, universities, mysterious characters, Gothic atmosphere that is both seamy and elegant, plenty of dialogue (dialogue is how people communicate, after all), and outstanding descriptions. It’s a long book, but that’s not a problem for me. I had no trouble with the flow of the plot. It kept me riveted.
You can’t really like Herbert West, but you can be fascinated by him, even as the narrator, Charles Milburn, is. In fact, I found Milburn to be more interesting than West, because we can watch his complexity developing, even as West remains a mystery. There is always a paranormal element in the book, but this increases toward the end, as Milburn becomes more familiar with ancient alchemical writings. He begins to see ghosts and is visited by the apparition of John Hocks become a demon (the existence of Hocks haunts the entire book). And then of course there is what happens to the Necromancer’s blood ... And the unexplained mystery of the emerald ring ...
The early 20th-century period in which the book is laid is perfect for this tale of pseudoscience. Medical knowledge was advancing rapidly, but it hadn’t reached the stage of forensic DNA testing – still primitive enough that experiments such as West’s might be plausible.
Some fine descriptions gem the book, just enough of them to enhance the atmosphere. Here is an example from the very first page:
“I will admit that certain of my memories are too heavy to carry around with me. I have entrusted them to a mental root cellar – dark, cold and difficult of access. The key to this place, unlike most keys, permits itself to be found only on nights such as this, when I have drunk deeply enough to set aside daytime scruples.”
One might say that the idea of cellars and darkness dominates the book, in contrast with certain passages of beauty and light, such as these:
“Her home resembled a ship’s cabin, afloat on a sea of leaves visible through the window.”
“The wind blew over the cliff top, stirring the grass tussocks that clung to the thin soil on the rock. On the far horizon was a bank of high-piled cumulus clouds, their battlements and crenellations like the gate of heaven.”
Great stuff!
This book is only the first of four parts, which I plan to read before too much time passes. How can you not want to learn what happens next to Herbert West and his steadfast friend, Charles Milburn?
Read more
Helpful
Sending feedback...
Thank you for your feedback.
Sorry, we failed to record your vote. Please try again
Report abuse

Denzil
4.0 out of 5 stars Loveingly crafted; a really good read.
Reviewed in the United States on January 15, 2018
Verified Purchase
In this book, the writing is smooth; the sentences and paragraphs have a perfect balance; the characters are interesting, authentic and believable; dialogue flows naturally.

The plot is based on a short story by H. P. Lovecraft, an American horror fiction author from the early 20th century. It deals with a clever, enigmatic and devious medical student and physician, Herbert West, who concocts a potion and develops a method to re-animate the recently deceased – with varying degrees of success. Enigmatic he may be, but he exerts a strong influence over the narrator of the story, university librarian Charles Milburn, to such an extent that Milburn seems to prefer West’s bedside manner than that of his girlfriend, Alma Halsey. Milburn becomes West’s assistant in grave-robbing and laboratory experimentation.

Driscoll plays off the interplay between West and Milburn perfectly. “Don’t be an idiot, Charles, just do it,” says West – and Milburn does it, always, despite seeing ethical problems in West’s work. Later he describes himself as “a guilt-ridden being who had wrestled with the dilemma of friendship with a murderer.”

And then there are the re-animated corpses. How will they behave when brought back to life? How long will they survive for? Will they die (again) or have to be killed? The fact that Herbert West himself has no clear idea about the outcome of his experiments only adds to the suspense.

The book loses a bit of momentum around the two-thirds mark, when both West and Alma are out of the country and communicate with Milburn via mail. But when West returns, Milburn again falls under his spell, the experiments continue, the dead rise, and the final chapters lead to a gripping finale.
Read more
Helpful
Sending feedback...
Thank you for your feedback.
Sorry, we failed to record your vote. Please try again
Report abuse

By midway through, I found the book hard to put down as the plot roared on to a most unexpected climax. And yet, in a way, that climax was almost inevitable because of who and what the two main characters are.

I've just downloaded the second book in the series, and I highly recommend it to anyone who loves a powerful story masterfully told.
Read more
Helpful
Sending feedback...
Thank you for your feedback.
Sorry, we failed to record your vote. Please try again
Report abuse

Mark Paxson
4.0 out of 5 stars I'm glad I did
Reviewed in the United States on April 7, 2018
Verified Purchase
I read a review of this book on a blog and decided to give it a try. I'm glad I did. It is an excellent story, exceptionally well-written and well-told. I put Audrey in this category of writers who write in a more old-fashioned style. There is a poetry to her style, a rhythm and movement that is ... well, it's like baseball. There is no clock, and there are moments when nothing much is happening. But a good storyteller and a patient reader can recognize that even in those quiet moments something is happening. And a lot happens in this story. I highly recommend it.
Read more
Helpful
Sending feedback...
Thank you for your feedback.
Sorry, we failed to record your vote. Please try again
Report abuse
See all reviews
Fast, FREE delivery, video streaming, music, and much more
Prime members enjoy Free Two-Day Shipping, Free Same-Day or One-Day Delivery to select areas, Prime Video, Prime Music, Prime Reading, and more.
> Get started
Back to top
Get to Know Us
Make Money with Us
Amazon Payment Products
Let Us Help You
EnglishChoose a language for shopping. CanadaChoose a country/region for shopping.
© 2008-2020, Amazon.com, Inc. or its affiliates