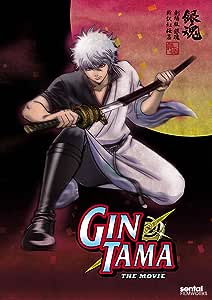 Add to Cart
CDN$ 37.99
And FREE shipping on eligible orders. Details
Sold by: Amazon.ca
Have one to sell?
Sell on Amazon

Gintama: The Movie (2010) is a fast-paced, take-no-prisoners reworking of the long-running Gintama TV series (2006). Gintoki, an eccentric young samurai, runs an odd-jobs service with his friends Shinpachi, the heir to a martial arts dojo; Kagura, a powerful, red-haired alien girl; and Elizabeth, a giant duck who holds up signs commenting on the action, like Genma Saotome in Ranma 1/2. What should be a routine request to find the Benizakura, a deadly sword with a pinkish blade, lands Gen and his friends in a violent series of battles tied to a plot to overthrow the shogun. Gin triumphs because he adheres to the traditional virtues of Bushido, the samurai code of honor, while his foes are hungry for naked power. But despite the similarity of themes, Gintama is a far cry from Rurouni Kenshin. This version of Tokugawa-era Edo includes artificial intelligence, aliens, flying battleships, and Jump manga. The fragmentary storyline careens from violent sword fights to slapstick jokes to anachronistic references. Viewers who haven't seen the broadcast series and/or the OVAs (a total of more than 250 episodes) will find themselves hopelessly lost; fans of Gintama will enjoy seeing the familiar cast up to their usual nutty stunts--especially in the short tailpiece, where an army of characters fights over who gets to be in the sequel. (Rated TV 14 VSL: violence, violence against women, brief nudity, profanity, risqué and gross humor, grotesque imagery, tobacco use) --Charles Solomon --This text refers to the blu_ray edition.