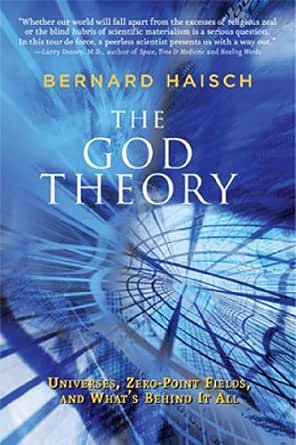 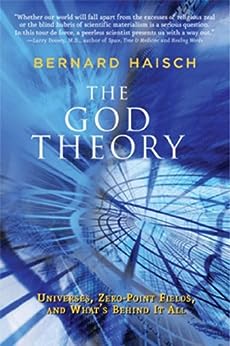 The God Theory: Universes, Zero-Point Fields, and What's Behind It All Kindle Edition

Physicist Haisch thinks "Let there be light" isn't just a randomly chosen phrase for the Creation. Indeed, he believes that in the mysteries of light rest clues to the deepest mysteries of the universe, something he calls God, though he doesn't mean by that word the personification that some believers prefer. A scientist who has worked in astrophysics and theoretical physics, Haisch has retained his wonder at the universe from childhood, as he describes in the affecting memoir with which the book begins. Many scientists find no tension between their profession and the profession of belief in divinity, but Haisch goes one step further by attempting to find a scientific explanation for the phenomenon generally called God. Light, that familiar but utterly mysterious force, is the key to such an understanding. Readable and engaging, Haisch will be embraced by those concerned with finding ways of reconciling science and religion. Patricia Monaghan
Copyright © American Library Association. All rights reserved --This text refers to an out of print or unavailable edition of this title.

Bernard Haisch, PhD, (Redwood City, California) has been the principal investigator on NASA research grants and scientific editor of Astrophysical Journal. He has written hundreds of articles; this is his first solo book. --This text refers to an out of print or unavailable edition of this title.

"Readable and engaging, Haisch will be embraced by those concerned with finding ways of reconciling science and religion." ---Booklist --This text refers to an alternate kindle_edition edition.

In The God Theory, Bernard Haisch discards both scientific dogma and religious dogma and proposes a theory that provides purpose for our lives while at the same time is completely consistent with everything we have discovered about the universe and life on Earth. To wit, Newton was right -- there is a God -- and wrong -- this is not merely a material world. Haisch proposes that science will explain God and God will explain science. --This text refers to an alternate kindle_edition edition.

In The God Theory, Bernard Haisch discards both scientific dogma and religious dogma and proposes a theory that provides purpose for our lives while at the same time is completely consistent with everything we have discovered about the universe and life on Earth. To wit, Newton was right -- there is a God -- and wrong -- this is not merely a material world. Haisch proposes that science will explain God and God will explain science. --This text refers to an alternate kindle_edition edition.
Read more

4.4 out of 5 stars
4.4 out of 5
320 global ratings
How are ratings calculated?
To calculate the overall star rating and percentage breakdown by star, we don’t use a simple average. Instead, our system considers things like how recent a review is and if the reviewer bought the item on Amazon. It also analyzes reviews to verify trustworthiness.
Top reviews

Barry Murphy
1.0 out of 5 stars Karma Shmarma
Reviewed in Canada on May 9, 2018
Verified Purchase
Not a fan of this work. I couldn't even finish reading the book. Too much focus on the concept/belief of Karma which I have never been able to accept. The idea that we pay for our behavior towards others either in this life or the next just doesn't prove itself out. Some of the most horrible people live long lives of social and financial success, with little to no consequences. And there is no proof of reincarnation into another life just like there is no proof of multiple universes. Not sure why the author accepts one and not the other, except for blind faith maybe? If my life is a result of actions in past lives I have to recollection of it so it doesn't matter on any practical level whatsoever.
Read more
Helpful
Report abuse

H. Prince
2.0 out of 5 stars A Little Disappointed.
Reviewed in Canada on July 8, 2009
Verified Purchase
While the author has enough knowledge to have made this book scientifically informative, he chose to use it as a preaching venue aimed at both religious and scientific communities. Now and again, it becomes interesting, then there are pages of what I would call preaching in a religious sense, and sometimes almost complaining about the scientific community's behaviour, attitudes, etc. My own field of study is religion and philosophy. I expected something that would bring me a step closer to emerging science and religion in my own understanding of God. I am somewhat disappointed in the book.
Read more
6 people found this helpful
Helpful
Report abuse

Ronald W. Maron
5.0 out of 5 stars A marvelous conclusion !
Reviewed in Canada on January 7, 2009
Verified Purchase
After spending the past thirty years on my own personal spiritual journey, I have finally crossed paths with someone who has, likewise, arrived at the same conclusions that I have. The answers to 'Who God is.' and 'Who God isn't.' I felt throughout must have be easy and common-sense. I could never fathom a God who would not encourage his/her people to set off on a spiritual journey only to be mesmerized with the complexity of the answers that are being found. It was encouraging to find that Mr. Haisch had come up with the same complexly simple answers that I have found too. Any person who reads this offering and does not feel that its insights are not on the right track towards enlightenment still have a great deal of previous scientific or religious dogma to overcome. I wish them well and God-speed. This book should serve as a significant milestone for all who have journeyed along their own spiritual pathways on their way to the ultimate Truth.
Read more
8 people found this helpful
Helpful
Report abuse

Regnal the Caretaker
5.0 out of 5 stars Spiritually lifting..
Reviewed in Canada on June 14, 2010
..graceful dissertation by renown scientist, thinker and independent Christian.
I just love this book, every sentence from it. It directly opposes widely hold views that "science cannot find God, therefore God does not exists". We are God's experience, we are created to search and learn, therefore above mentioned dogma is rather invalid (according to the author). And it is hard to disagree after reading "God Theory". Despite of many claims that quantum physics is unconscious, Dr. Haisch states otherwise. He presents credible (and BTW amusing) blow to "Many Worlds" interpretation - golden spot of this book !! If we can speculate freely about multiverses and Apocalypse in the form of Universe's phase transition, the ZPF theory should be treated with respect as well. It is impossible to emphasize all captivating concepts and conclusions flying from the pages of Bernard Haisch work, but I can tell you, this was the best lecture on the subject "religion/consciousness/science" I have ever read. "God Theory" should be sold as a one volume, together with Owen Gingerich "God's Universe". More about ZPF theory/consciousness and its scientifically proven implications on our well being can be found in excellent "The Field" by Lynne McTaggart (see my review).

feather
4.0 out of 5 stars Interesting
Reviewed in Canada on February 19, 2011
This book is very thought prevoking. The main comment I would have for it is that it is mostly aimed at the scientific community and those who do not have a higher education or knowledge will find the book more difficult to read and absorb. For those it will just take longer to read but it can be done.
Read more
2 people found this helpful
Helpful
Report abuse
See all reviews

IMCPU2
5.0 out of 5 stars Thought Provoking and Exciting.
Reviewed in the United Kingdom on February 11, 2016
Verified Purchase
I won't say that I understood all of the points in this book. I have limited understanding of physics or astrophysics, but some of the concepts just feel intuitively right. Indeed trying to understand the reason behind our existence must be something that most people ponder to some degree or another. The older you get the more you ponder. The God Theory feels like it answers most of my questions and makes me think of more along lines similar. Having been brought up as a Roman Catholic and quickly (by 16 anyway) dismissed most contemporary religions as hypocritical nonsense I have been searching for a way to sum up the way that I feel about life and this book answers a lot of those questions and feelings.

The book is well written and easy to follow even if some of the technical terms make you continually look to the Kindle dictionary. A book that I think I will re-read in a few years. It will be interesting to see if I still have the same belief. Excellent and thought provoking.
Read more
5 people found this helpful
Report abuse

Dodwell
5.0 out of 5 stars Totally recommended
Reviewed in the United Kingdom on April 25, 2018
Verified Purchase
Brilliant. A really mind bending theory which presents how we look at God or The Creator, in a wholly different way. It's not often a book "blows my socks off", but this did. Totally recommended.
Read more
One person found this helpful
Report abuse

Thomas
2.0 out of 5 stars an old idea sold as new
Reviewed in Germany on August 19, 2018
Verified Purchase
God as universal consciousness - the principal idea of the 'God Theory' - is presented here in a rather secular way, as if it were anything new on the horizon. With the author trying to convince the reader of the reasonability of his theory, and - a bit pathetically - of his authority on the field, he is aparently ignorant and unaware of the fact that 'god as conscienceness' is also the main idea behind Hinduism and the vedic science, the so-called Sanatana Dharma - all together a belief system that has been followed for several thousand years by millions, if not a billion people and more. I would say if this catholic ex-seminarists would have looked a bit more beyond the church fence, he would have realised that his book is entirely redundant and obsolete. Someone interested in such a theory of God consciousness will find richer inspiration in the Bhagavad-Gita or the Upanishads.
Read more
One person found this helpful
Report abuse
See all reviews
Back to top
Get to Know Us
Make Money with Us
Amazon Payment Products
Let Us Help You
EnglishChoose a language for shopping. CanadaChoose a country/region for shopping.
© 2008-2021, Amazon.com, Inc. or its affiliates