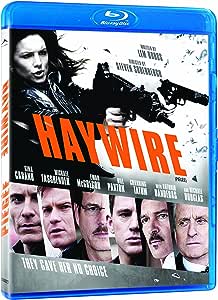 4.3 out of 5 stars
4.3 out of 5
870 global ratings
How are ratings calculated?
To calculate the overall star rating and percentage breakdown by star, we don’t use a simple average. Instead, our system considers things like how recent a review is and if the reviewer bought the item on Amazon. It also analyzes reviews to verify trustworthiness.
Top reviews

Jennifer K.
5.0 out of 5 stars Not a film for misogynists...
Reviewed in Canada on July 12, 2012
Verified Purchase
If you hate women, this isn't the film for you. If you enjoy seeing a strong, competent, confident female lead kick butt and out-fight and out-smart some morally-challenged men, then you'll love this film.

We enjoyed the fight scenes, the scenery, the pace, the twists and turns. We didn't like the fact that several things were left unexplained / red herrings? (explained in a sequel maybe?) but hey, it was a fun film to watch, and we're going to watch it again this week.

One warning: at one point, a vehicle hits a "deer" BUT the deer looks very, very fake (wobbles like rubber, not much detail on it), so animal lovers can breathe a sigh of relief.

The film starts off in an ordinary way. A young woman goes into a roadside diner and sits down. She orders tea, and in walks a man who goes right over to her, sits down across the table from her. There isn't much small talk (this film isn't big on dialogue over all), he orders a cup of coffee..
and then the guy throws hot coffee in her face and starts laying a beating on her. We thought, "What the ....?" and the other diners look shocked as well. Here's this helpless, petite gal getting beat up by this tall, muscly guy. And this preconception... misconception... and others continue to be shattered throughout the film.

We find the heroine gives better than she gets, and is tough through and through. She's been marked for death, but why, and by whom? We find out through flashbacks what has led to this situation, and it's a plausible, interesting story.

Hard to believe this is Gina Carano's first film. She's tough (in real life too), is 30, and is 5'8", 145 lbs of muscle (stats according to [...]), so right there she's not like so many actresses today (fluffy, whiny, and anorexic). When the film opens, GC looks kind of ratty, but that's the idea. In flashbacks, we get to see her before the fit hit the shan, and she looks smokin' hot.

Bill Paxton (Twister) is understated but excellent in the later part of the film, and does an excellent job of balancing emotions and words, drawing us in even further.

Over all, a very enjoyable film, and I do hope there is a sequel in the works.
Read more
6 people found this helpful
Helpful
Comment Report abuse

Joel C.
2.0 out of 5 stars Don't waste your money on this boring movie
Reviewed in Canada on August 6, 2019
Verified Purchase
This movie promised lots of action, but failed to deliver. A lot of big name stars appear in the film, but it was boring as hell. The story was so predictable to the point that I guessed the ending half way through it.
Read more
Helpful
Comment Report abuse

MadHat
4.0 out of 5 stars Action the way it should be.
Reviewed in Canada on November 11, 2012
Verified Purchase
Haywire is a throwback to the days of Steve McQueen and Lee Van Cleef. It is raw and honest, the way a smart action movie should be. None of the over the top hyperbole of an Expendables or Dark Knight. It just feels real, which is more than I can say about 90% of the tripe Hollywood is churning out these days.

Gina Carano is not only gorgeous, but she proves she has a future as an actor and an action star. Not very many women can pull off a believable hard-nosed action hero, but she nailed it.

I loved this movie and bought it as soon as I was able. If you enjoy getting a little more than you bargained for in a film, then give Haywire a try.
Read more
2 people found this helpful
Helpful
Comment Report abuse

DALER TONELLI
5.0 out of 5 stars great cast
Reviewed in Canada on August 9, 2019
Verified Purchase
good solid action flick with a very solid cast.
get it cheap and you will be very happy.
nice to have a woman lead kick some butt
Read more
Helpful
Comment Report abuse

Michael Ducharme
4.0 out of 5 stars Worth buying
Reviewed in Canada on May 20, 2020
Verified Purchase
Good action movie too bad they didn’t follow it up with a second one it leaves you hanging at the end
Read more
Helpful
Comment Report abuse

Maxine P.
1.0 out of 5 stars Not able to view.
Reviewed in Canada on January 21, 2019
Verified Purchase
This was a gift for a friend, not able to view as it skips like s.o.s. morse code. Refund????
Read more
Helpful
Comment Report abuse

Mark
4.0 out of 5 stars Good but needs a follow up.
Reviewed in the United Kingdom on May 16, 2020
Verified Purchase
It is good but could of done with a follow up and maybe a better ending. For her first time in acting Gina Carano was very good. But it is one of those films that you have to watch and not listen to the critics.
Read more
Report abuse

C.J. Zographos
4.0 out of 5 stars Worth the effort
Reviewed in the United Kingdom on November 21, 2020
Verified Purchase
Solid work by the stars and the director, although no one person really stands out.
Read more
Report abuse

Sarah26
5.0 out of 5 stars Five Stars
Reviewed in the United Kingdom on November 1, 2017
Verified Purchase
Great dvd
Read more
One person found this helpful
Report abuse
See all reviews
Pages with related products. See and discover other items: bill paxton
Fast, FREE delivery, video streaming, music, and much more
Prime members enjoy Free Two-Day Shipping, Free Same-Day or One-Day Delivery to select areas, Prime Video, Prime Music, Prime Reading, and more.
> Get started
Back to top
Get to Know Us
Make Money with Us
Amazon Payment Products
Let Us Help You
EnglishChoose a language for shopping. CanadaChoose a country/region for shopping.
© 2008-2020, Amazon.com, Inc. or its affiliates