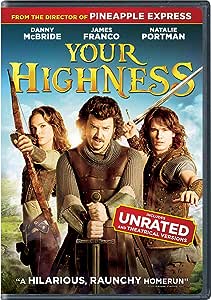 Get high and mighty with Danny McBride, James Franco and Natalie Portman in Your Highness, the epic and hilarious action-comedy from the director of Pineapple Express. Two royal princes—slacker Thadeous (McBride) and the noble Fabious (Franco)—join with an elusive warrior (Portman) on a quest to free a princess from an evil wizard. Along the way, they’ll have to vanquish horrific creatures and traitorous knights in this raunchy trip loaded with footage too outrageous for theaters.

Pineapple Express, the first film to team James Franco with Danny McBride and director David Gordon Green, featured a loose-limbed, improv-rich approach to storytelling that hovered on the edge of self-indulgence. The medieval spoof Your Highness offers up more of the same shambling, hazy likability, only more so. Although undeniably hilarious at times, it often feels like the feature-length equivalent of Burt Reynolds slapping Dom DeLuise during the end credits of Cannonball Run. Beginning with an admirably tasteless gallows gag, the story follows a drunken, craven lout (McBride, who also scripted with his Eastbound & Down cohort Ben Best) who teams up with his more heroic, destined-to-be-king older brother (Franco) to rescue a damsel fair (Zooey Deschanel) from an unprintable fate by an evil sorcerer (a very funny Justin Theroux). Along the way, they stumble across a love-struck Minotaur, a village of bloodthirsty women, and a beautiful ninja type sworn to vengeance (Natalie Portman). Promisingly, instead of focusing on tired Lord of the Rings riffs, McBride and Co. here set their sights on such prime slabs of '80s Velveeta as Deathstalker and Yor, films that were only one application of bronzer away from outright parody themselves. Unfortunately, for every inspired bit, such as a gloriously wrong encounter with a sage Muppet, there are maybe three instances where the joke simply involves mixing up the King's English with modern-day profanities. (Which, admittedly, can sometimes be hilarious too.) Fans of the cast and crew's previous efforts should definitely check it out, but there's the lingering sense that the movie is probably only a quarter as much fun to watch as it was to make. Forsooth. --Andrew Wright

See more
Fast, FREE delivery, video streaming, music, and much more
Prime members enjoy Free Two-Day Shipping, Free Same-Day or One-Day Delivery to select areas, Prime Video, Prime Music, Prime Reading, and more.
> Get started
Back to top
Get to Know Us
Make Money with Us
Amazon Payment Products
Let Us Help You
EnglishChoose a language for shopping. CanadaChoose a country/region for shopping.
© 2008-2020, Amazon.com, Inc. or its affiliates