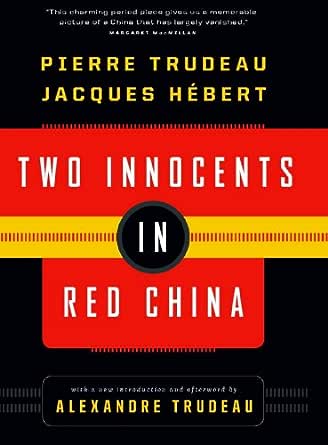 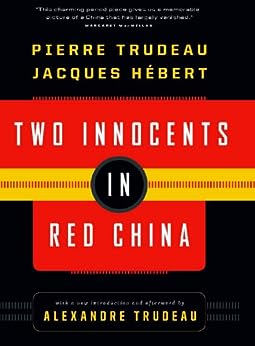 "Sacha Trudeau, a documentary filmmaker who inherited his father's love of exploration, has honoured that intrepid spirit through his role in the newly republished edition of Two Innocents in Red China, a wry, at times mischievous and often insightful travelogue detailing a 1960 trip made by Pierre Trudeau and friend Jacques Hebert to the People's Republic...Some in Quebec criticized Pierre Trudeau for visiting China during the dark days of Maoist tyranny. But Pierre Trudeau and Hebert aimed to illustrate that much could be gained by simply observing. 'The point is not to judge other worlds by the standards of your own,' says Sacha Trudeau. It's something to remember, he adds, when dealing with the newly resurgent China." (Toronto Star)

"Their myth-breaking has a tone of foresight for readers over 40 years later, such as when they say that China indeed is capable of harnessing its numbers and transforming itself into an industrial power...Just as the book itself is fun to read, the new introduction is equally enjoyable, [and]...lends a personal and intimate touch to this informal look at China." (The Embassy)

"Alexandre's 33 intensely serious pages contrast sharply with the far more expansive, slyly humorous pages, penned by the elder Trudeau and Hebert...Alexandre's introduction tries to analyze the Red China visited by the two innocents. His father, in the subsequent pages, seems more concerned with having fun. Pierre plots ways of slipping away from the ever-present government guides and wonders how much he dare flirt with one pretty young translator. The Trudeau-Hebert section is delightfully dated." (Montreal Gazette) --This text refers to an out of print or unavailable edition of this title.

Pierre Elliott Trudeau was the Prime Minister of Canada from April 1968 to June 1979 and again from March 1980 to June 1984. In 1970, he established diplomatic relations with China, a move other Western nations would soon follow. He died in 2000. Jacques Hebert is a Canadian author, journalist, politician and traveler. A Senator from 1983 to 1998, he founded two publishing houses, plus Canada World Youth and Katimavik. He lives in Montreal, Quebec. Alexandre Trudeau, second son of the late Pierre Elliott Trudeau and Margaret Trudeau, is a filmmaker and contributing editor at Maclean's magazine who has reported from Iraq, Liberia, Haiti and Israel. He lives in Montreal, Quebec. --This text refers to an out of print or unavailable edition of this title.