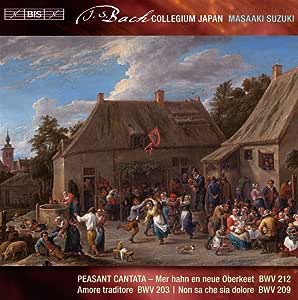 This is the seventh disc in the Bach Collegium Japan and Masaaki Suzuki’s series of secular cantatas by J. S. Bach. The best known of these cantatas is featured on this installment, the ever popular “Peasant Cantata.” The piece was written in broad dialect, and set to music which was based around folk songs, making it accessible to the greater population rather than the educated elite. The soprano cantata BWV 209 was composed as a musical farewell to one of Bach’s pupils upon his departure from Leipzig. Finally, Amore traitor for bass solo follows the story of a lover who accuses Amor of betrayal and deception. The closing aria is distinct, utilizing both the voice and the harpsichord in virtuosic passages.