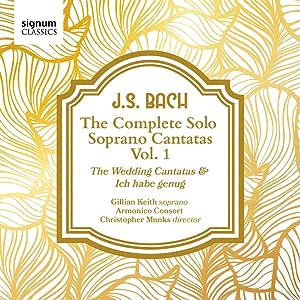 Soprano Gillian Keith joins the acclaimed Baroque ensemble Armonico Consort under Christopher Monks for the first release in a three disc series featuring the solo cantatas of Johann Sebastian Bach. Bach's cantatas hold a special place amongst performers and devotees of his music. Whether sacred or secular, these works provide incredible variety for listeners and players alike. Some contain elements of storytelling similar to arias and recitatives from his great Passions; many have instrumental movements and solo passages that rival any of his concerti, and are indeed borrowed directly from some of the most famous. Not surprisingly, Bach's cantatas are often incredibly virtuosic, demanding as much technical ability, style and understanding of the music as any of his other works.