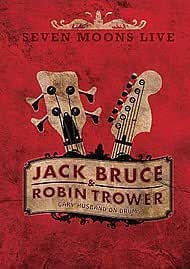 This historic night at the mighty and majestic Concertgebouw De Vereeniging in the Netherlands features Robin Trower, Jack Bruce and drummer Gary Husband playing nearly the whole Seven Moons album, plus signature tunes from Bruce's catalog and a solo from Trower. This DVD features Jack Bruce in a heartwarming performance - one of his first onstage after some heavy blows of fate, sharing the joy of music with other musicians while playing classic, everlasting rock music. 60 minutes.

Great stuff. This performance ranks alongside the best material Jack Bruce and Robin Trower have done individually and collectively over the decades.

There's nothing fancy about the performance. There are no ostentatious theatrics or staging. This is just three first rate musicians performing some great new material along with covers of Politician and Sunshine of Your Love, both Jack Bruce compositions from his days with Cream.

My only criticism of this album is that I would have liked to hear this band cover some of the early Robin Trower classics like Day of the Eagle and Too Rolling Stoned along with the covers of Cream material.

But that's a really minor issue.

For fans of Cream and of Robin Trower, you won't be disappointed with this DVD. I highly recommend it.

Alan Mayes
5.0 out of 5 stars Very Enjoyable
December 22, 2012
Format: DVDVerified Purchase
As a fan of Jack Bruce I was interested to see how this music would sound live. This is a very enjoyable DVD. The musicianship between the 3 players is tight and played by artists who understand their craft and their instruments. One of my favourite DVD's to work out to.
Read more
Helpful
Comment Report abuse

Smokey Lynx
5.0 out of 5 stars Thank you Thomas Ruf
June 1, 2013 - Published on Amazon.com
Format: DVDVerified Purchase
It took almost 40 years for an individual to finally get the music of Robin Trower on a professionally filmed DVD and we have Thomas Ruf to thank for this . I plan on buying more Ruf products because of this although I don't know him or anyone at Ruf Records . I'm just a fan of Robins music ( and Amazon customer ) and very pleased that this is available for us to enjoy. Three world class musicians who created a fine album of all original material and did a short tour of Europe where it was filmed .
Disregard some of the other reviewer comments like " Gee, these guys are old " Duh , yes they are approaching 70, but still dynamic and creating wonderful music to enjoy. Segovia didn't quit when he was fifty years old and neither should they . Forget the nitpicking also , this was filmed on the first night they played live and there are no patch-in-overs , auto-tuning , canned midi music etc. like so many other artists do now .And we're lucky to see and hear it even if we couldn't be there.
As noted by others the guitar is a little bit low in the mix but the playing is wonderful. Make sure you set the sound choices properly at setup , if it's set to surround on your 2 channel system the guitar will sound pretty banjoey.
I bought the live CD also .
Read more
3 people found this helpful

Kurt Harding
4.0 out of 5 stars A Solid Performance
November 1, 2009 - Published on Amazon.com
Format: DVDVerified Purchase
Even though I already owned the studio CD of Seven Moons since its release a couple of years ago, I was delighted to hear that a live performance of the album was being released on DVD. So I ordered it as soon as I got word it was available. What's the verdict? Its a solid performance...
On this DVD, ten songs from the album, three Cream songs, and one other are presented. And while Jack Bruce doesn't sound exactly as he did in his days with Cream, he hasn't strayed far. As for Robin Trower, well he is just superb. One of the joys of seeing Trower live is the amusement one gets from watching his facial contortions while he plays. Backing Trower and Bruce is the steady, skillful drum work of Gary Husband.
My favorites on the DVD differ slightly from what I like best on the studio album. They are Seven Moons, Lives of Clay, Distant Places of the Heart, The Last Door, the exquisite Carmen, and two old Cream songs, Sunshine of Your Love and Politician. And while there are no "extras", what is here gives the viewer plenty of value for money.
Don't pay any attention to the naysayers. If you like Trower and especially if you like Jack Bruce, you are going to enjoy Seven Moons Live. Order it while its cheap, you won't be sorry.
Read more
5 people found this helpful

Frankenformer
5.0 out of 5 stars AWESOME!
January 13, 2014 - Published on Amazon.com
Format: DVDVerified Purchase
Robin Trower is my favorite guitarist/songwriter, and to see him play live with Jack Bruce (Cream) and Gary Husband (Level 42) on a collection of "Seven Moons", "BLT", etc., as well as some of Cream's greatest hits is an amazingly satisfying experience. This DVD sounds fantastic on my home theater system, and the visuals are superlative. The "only" disappointment I had with this great concert is that the camera work was not choreographed very well. A lot of time is spent on faces, long shots, and wide-zoom, but I would have liked to have seen more fretboard action by the legendary fingers of both Bruce and Trower, as well as some actual drumming by Husband (who is outstanding - absolutely out of this world). Otherwise, a concert worth watching over and over again...
Read more
2 people found this helpful

Mumblin' Mark
4.0 out of 5 stars The Shine of Seven Moons
November 7, 2009 - Published on Amazon.com
Format: DVDVerified Purchase
Jack Bruces' style and panache persuaded me to take up bass in 1974. I've followed his performances since the "How's Tricks" tour and own most of his releases, on vinyl,CD and VHS. In my opinion the "Seven Moons" CD is his best recorded performance, with inciteful lyrics, a smooth,fat bass sound and perfect production. While I would have preferred to see this band live, I was relieved to hear it would be released on DVD.

I find Robin Trowers' music somewhat hypnotic having seen him twice in the last few years but playing with Jack Bruce causes him to "take it up a notch". Their two previous collaborations "BLT" and "Truce" were entertaining.He was obviously having fun here!

Gary Husband is one of the most lyrical drummers playing today.

The sound is quite good,as is the camera work.I wish they had kept to their shared work rather than including Cream tunes. The only reason I couldn't give this DVD 5 stars is that Mr. Bruce is really showing his age. The passion is still there but the fire doesn't burn as brightly. I can understand his possible inability to tour extensively. Sadly this fate awaits us all, and should remind us to ejoy all we can while we can!

ethersea
5.0 out of 5 stars Great performance....
April 29, 2013 - Published on Amazon.com
Format: DVDVerified Purchase
This is a stellar performance...I absolutely LOVE their "Seven Moons" record, so I was excited to have the opportunity to see many of those tracks performed live (if the Trower/Bruce collaboration interests you, I encourage you to read my review of "Seven Moons"). The music sounds amazing...this is a true power trio, with plenty of soulful energy pouring from the stage...however, I will say that I do not love the film editing, with the camera wandering off in various directions during Trower's solos, too little camera time for the excellent Gary Husband, etc. Be that as it may, it is beautifully shot and the sound is good as well.
Read more
One person found this helpful
Go to Amazon.com to see all 25 reviews 4.1 out of 5 stars
Fast, FREE delivery, video streaming, music, and much more
Prime members enjoy Free Two-Day Shipping, Free Same-Day or One-Day Delivery to select areas, Prime Video, Prime Music, Prime Reading, and more.
> Get started
Back to top
Get to Know Us
Make Money with Us
Amazon Payment Products
Let Us Help You
EnglishChoose a language for shopping. CanadaChoose a country/region for shopping.
© 2008-2020, Amazon.com, Inc. or its affiliates