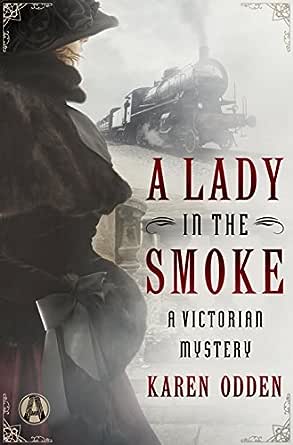 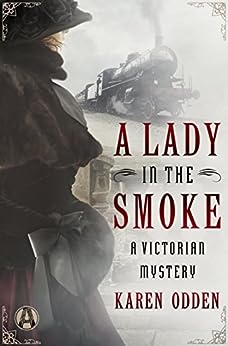 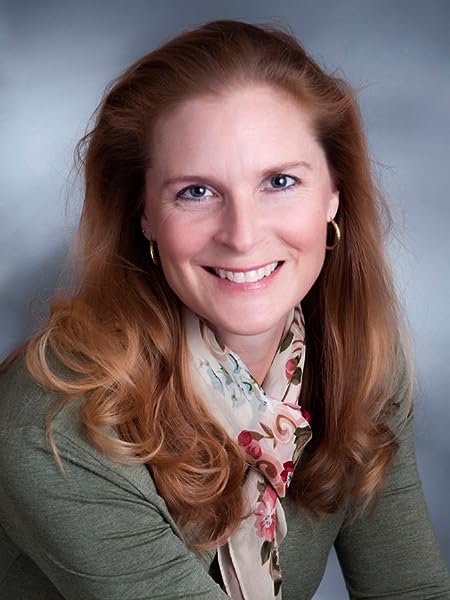 A Lady in the Smoke: A Victorian Mystery Kindle Edition

“This riveting historical debut is chock-full of details about Victorian England, spun into a masterful tale of romance, railroads, and mystery. Propelled by an engaging heroine and a deftly plotted conspiracy, it's a great read!” ---Stefanie Pintoff, Edgar Award–winning author of Hostage Taker --This text refers to an out of print or unavailable edition of this title.

Karen Odden received her PhD in English literature from New York University and has taught at the University of Wisconsin-Milwaukee and the University of Michigan-Ann Arbor. She currently serves as an assistant editor for the academic journal Victorian Literature and Culture. A Lady in the Smoke is her first novel.

Actor and voice-over artist Mary Sarah is known for her subtle, emotionally potent performances. Classically trained at the Riverside Shakespeare Academy and the Film Actors Studio in New York City, Mary narrates books filled with adventure, mystery, and romance. --This text refers to an out of print or unavailable edition of this title.

4.4 out of 5 stars
4.4 out of 5
348 global ratings
How are ratings calculated?
To calculate the overall star rating and percentage breakdown by star, we don’t use a simple average. Instead, our system considers things like how recent a review is and if the reviewer bought the item on Amazon. It also analyzes reviews to verify trustworthiness.
Top reviews

What a ride...pun intended! This debut Victorian murder/mystery novel by Karen Odden was well paced and engaging from start to finish. Lady Elizabeth Fraser and her mother are returning to their ancestral seat in the English countryside after her fourth season in London when all hell breaks loose. Their train ride home turns into a living nightmare when it derails and catches fire. After being rescued from the train and getting her mother away from the carnage, they are treated by the railway surgeon, Paul Wilcox, for their injuries and brought to the nearest town to recover. This is a life altering event for Lady Elizabeth and she rises to the occasion with aplomb and courage.

This is more than just a murder mystery though. There is also intrigue, conspiracy and corruption involved with railway companies and members of parliament. There are fascinating details into railway medicine and the differences between doctors and surgeons. The use of laudanum during this time as a go to help ease pain and nervous conditions is also part of this story.

With such disparity between the social classes, Lady Elizabeth and Paul Wilcox find themselves drawn to each other. You just feel their emotions hovering between them. As Lady Elizabeth begins to learn long held family secrets as well as others, she is drawn further and further into the possibility of sabotage and tumbling railway stock prices as she assists Paul and his friend, Mr. Flynn from the Falcon newspaper in investigating. The urgency throughout this novel is palpable. This is one well written and developed debut novel! I can only hope there is more to come!
Read more
Helpful
Report abuse

Vesper
5.0 out of 5 stars An enjoyable interesting mystery
Reviewed in Canada on June 6, 2017
Verified Purchase
After another season in London, Lady Elizabeth Fraser is one her way home when she is ijuried in a train wreck. After meeting railway surgeion Paul Wilcox and newspaperman Tom Flynn she becomes involved in a conspiracy of many years in the making.
A quite slow paced but interesting mystery with some well-developed characters.
Read more
Helpful
Report abuse

Pamela
5.0 out of 5 stars Highly recommended
Reviewed in Canada on June 6, 2017
Verified Purchase
Anne Perry fans will love this book. The research into Victorian railways is excellent, and the characters are all well drawn. Elizabeth is a strong female character...yes she does faint once but for good reason! I hope this author will write more soon.
Read more
Helpful
Report abuse

Avidreader
3.0 out of 5 stars Good but not great
Reviewed in Canada on April 27, 2019
Verified Purchase
I found this book to be slow and repeating itself in some areas. With a little more suspense and less repeating this would be a great story.
Read more
Helpful
Report abuse

Leslie631
5.0 out of 5 stars Interesting and enjoyable historical fiction
Reviewed in Canada on April 25, 2017
Verified Purchase
This book provided a lot of interesting historical information as the plot developed. The story moved along quickly and kept my interest. I would enjoy reading more books from this author.
Read more
Helpful
Report abuse

N. N. Light
TOP 1000 REVIEWER
5.0 out of 5 stars This historical mystery has it all!
Reviewed in Canada on January 24, 2019
Lady Elizabeth and her mother are traveling by train back to their estate from London when the train careens off its tracks. Elizabeth wakes up to her mother unconscious with a broken ankle and Elizabeth herself has a gash on her forehead. They somehow make it off the train and a gentleman doctor helps them by the name of Paul Wilcox.

Over the next few days, while her mother is recovering, she helps the young doctor who saved her and her mother’s life. There’s an immediate attraction between the two even though they come from different social circles. Elizabeth doesn’t tell Paul her title because she enjoys being treated like a normal woman and she knows Paul will withdraw if he found out. But like everything in Victorian England, the truth eventually comes out.

Meanwhile, Elizabeth discovers the train accident she endured was on purpose. In fact, there’s quite a few train derailments and it’s politically driven. The more Elizabeth and her new-found acquaintance reporter (a friend of Paul’s) unearth, the more long-buried family secrets emerge. When Paul is arrested for manslaughter, Elizabeth must risk her reputation and life as she knows it to save the man she loves.

A Lady in the Smoke is filled with suspense, twists and turns, not to mention a sweet romance between Paul and Elizabeth. Karen Odden draws you into Elizabeth’s world. The supporting cast of characters add such richness to this story and the mystery held my mind captive. Who is behind the railroad sabotage and murders? The courtroom scenes left me breathless and the ending was satisfying. Totally fed my love of trains and the Victorian era.

If you like historical fiction, especially Victorian, with dashes of mystery and romance, this book is for you! I look forward to more from Karen Odden.

Disclaimer: I received a copy from Penguin Random House Publishing Group – Alibi via Netgalley in the hopes I’d review it.

Brenda-Hagersville
5.0 out of 5 stars Very Interesting: Railroads and social classes in England in 1850s
Reviewed in Canada on March 30, 2016
Historical information about railways in England in the 1830-1890s was very interesting and the basis of this novel.

While attending her cousin's wedding ball in London in 1874, Lady Elizabeth overhears rumors of her family's failing finances. Retreating to their rural home in Kellham Park by train, its derailment injures Elizabeth and her mother Margaret Fraser, Dowager Countess of Kellham.

Finding herself in a hotel in Travers where no-one yet knows her social status, Elizabeth spends all night assisting railway surgeon Paul Wilcox in his use of chloroform administration on patients he is stitching and bones resetting in the scullery of the hotel.

Assuming she is a Miss not a Lady, Paul chats freely with Elizabeth and discusses the train situation and life in general as they get to know each other in an unconventionally intimate way in a very short time.

Her mother's use of laudanum, which is quite accepted for the era, is an added complication and one that present day readers would find shocking in how dangerous this drug is yet how readily it was used.
Read more
2 people found this helpful
Helpful
Report abuse
See all reviews

John Hopper
4.0 out of 5 stars good page turner, though a little uneven
Reviewed in the United Kingdom on May 4, 2017
Verified Purchase
This novel centres around the aftermath of a horrific railway crash in 1874, which the eponymous lady, Elizabeth Frazer, survives together with her mother. The drama of this opening section is not quite matched throughout the novel, though there is a gripping trial sequence later on. There is rather over-complicated and somewhat implausible plotting going on in the background, which underpins the train crash, the trial and a number of incidents in Elizabeth's past history. The novel's title perhaps makes it sounds rather more gothic/Wilkie Collins than it is. While the author has clearly done a lot of research, I did see a couple of errors: a reference to characters discussing the "latest Dickens installment", four years after he died; and the possible trial sentence being transportation to Australia, when the last such transportation took place in 1867. Finally, I was baffled by a reference in the author's note to a character not present in the novel: "My sadistic Dr. Wharton Sinkler was a real person, and he did wield a hot poker in the courtroom, although he lived in the 1890s in America. But he was too good to leave out". Well, she did leave him out, at least in the published version. Overall, though despite these annoying errors, I enjoyed this and would read more by this author - her follow up novel described on her website sounds intriguing.
Read more
One person found this helpful
Report abuse

Tuffy cat
5.0 out of 5 stars Enjoyable read that held me to the end
Reviewed in the United Kingdom on April 23, 2017
Verified Purchase
Implausible in places - the social barriers were more ingrained than the author shows so the whole premise of the romance is unsound but if you ignore that the historical background is well put and the mystery has a number of surprising twists and, of course, a happy ending with the villains dumbfounded. Heroine in some ways is shallow but that is always a risk in the first person and I did feel sorry for her cousin who is a decent chap who doesn't get the lady and that is the sign of a good book when you care about the characters.
Read more
2 people found this helpful
Report abuse

Melanie Hilton
3.0 out of 5 stars This seems to be set in the US, not England
Reviewed in the United Kingdom on October 12, 2017
Verified Purchase
This reads as though it is set in the US, not in England. I was finding that intrusive and then there was a train crash where a doctor was giving the heroine ether to stitch a minor head wound in the middle of a freezing, muddy field instead of getting her and her more seriously injured mother to safety and I gave up the struggle. Having said that, the writing is fluent and the characterisation interesting.
Read more
3 people found this helpful
Report abuse

Jayne Eyre
4.0 out of 5 stars Intriguing but ..
Reviewed in the United Kingdom on September 3, 2017
Verified Purchase
I thoroughly enjoyed the first 3/4 of this book. Exactly the kind of Victorian mystery I usually go for and with railways involved, even more so. After this point though the plot speede up too much a and there wee too many loose ends being tied up too quickly, leaving me feeling a bit cheated. I wonder whether this is due to editing rather than the editing though as up to this point the writing style was engaging and there was sufficient suspense and plots twists to keep me involved.
Read more
Report abuse