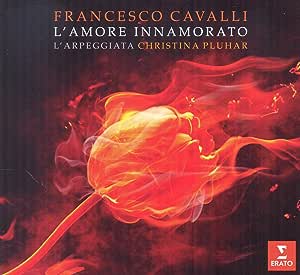 4.7 out of 5 stars
4.7 out of 5
51 customer ratings
How does Amazon calculate star ratings?
Amazon calculates a product’s star ratings using a machine learned model instead of a raw data average. The machine learned model takes into account factors including: the age of a review, helpfulness votes by customers and whether the reviews are from verified purchases.
Top reviews

Stephen Midgley
5.0 out of 5 stars Love, drama and colour in Cavalli's operas
Reviewed in the United Kingdom on October 26, 2015
Verified Purchase
This is a vivid and colourful selection of pieces from Cavalli's operas, largely based on the pre-eminent theme of baroque opera - namely love in all its manifestations of passion, joy, misery, loss, even amusement. There are two versions available at the time of writing: firstly, the present luxurious Limited Edition in a hardback, CD-sized book with an accompanying DVD, as described below; and the other, cheaper version which is the basic CD itself in a standard jewel-case with booklet.

The title 'L'amore innamorato' is taken from a Cavalli opera presumed lost; translated literally, it means 'love in love', but that sounds clumsy in English so I'd prefer to call it something like 'In love with love'. The six operas represented are, most prominently, La Calisto - represented by no less than five extracts - and L'Ormindo, La Didone, Il Giasone, L'Artemisia and L'Eliogabalo. Some of these works will be familiar to dedicated fans of baroque opera, as there have been modern productions as well as complete recordings at various times in the past, some of which are still available.

This imaginative, well-contrasted selection of extracts, and the dramatic and colourful approach of the period instrument ensemble L'Arpeggiata directed by Christina Pluhar, result in a striking and original programme of exceptionally fine quality. Of the sixteen pieces here, twelve are solo soprano arias - including Cavalli's customarily fluid dovetailing of arioso and recitative - and four are instrumental pieces. The vocal works are shared between two singers, Núria Rial for seven of the pieces and Hana Blazíková for the other five. Both singers are absolutely splendid, each one with a pure, clear voice ideal for this music, singing with beautiful style, spirit and conviction, and with lovely embellishments where appropriate. After listening for a while you'll be able to tell which one of them is singing without checking the booklet, and it's good to have that slight contrast - but with absolutely no need to decide whom you prefer because both are superb.

L'Arpeggiata play an impressive array of around twenty baroque instruments, resulting in an extraordinary richness of sound to complement the lovely performances of the two lead singers. Christina Pluhar directs from the theorbo with brilliant flair to match that of the players. Unlike some of her more wayward recordings, she and her colleagues here remain strictly baroque in style, and every one of these interpretations has an entirely authentic feel - which, of course, includes taking advantage of the ample opportunities offered by the music to score and to interpret with colour and variety. So, for example, there is usually plenty of fiddling, plucking and strumming going on, and there are especially striking contributions in most of the numbers from the cornetto of Doron David Sherwin. The opening item, the Armonia prologue from 'L'Ormindo', is an excellent example, with a beautiful instrumental introduction enhanced by Sherwin's bright and agile cornetto decorations, soon joined by the gorgeous voice of Hana Blazíková.

Other items include a couple of examples of one of Cavalli's favourite formats, the tragic lament on a ground, as well as instances of the more joyous aspects of love such as Calisto's 'Verginella io morir vo' ' from Núria Rial (track 6). From the same work, Satirino's 'Ninfa bella' (7) is especially imaginative in its orchestration, further coloured by percussion and sung with matching virtuosity by Hana Blazíková. A special delight from Núria Rial, on this occasion only indirectly related to romantic love, is the aria in 'L'Ormindo' from the page Nerillo 'Che città, che città', expressing the boy's breathless excitement and bewilderment upon his first adventurous outing in the big city (12). The percussion initially sets the atmosphere of urban noise and bustle, and it's an enchantingly lively, foot-tapping number passing through three episodes in contrasting rhythms - an absolute treat.

The vocal works are interspersed with a handful of instrumental pieces, including a Toccata by Kapsperger and the closing 'La suave melodia' by Andrea Falconieri – which at first seemed to me a bit of an anti-climax in contrast to the preceding vocal fireworks, but it's a graceful piece and brings the recital to a subdued and thoughtful close.

The hardback, CD-size 80-page booklet contains excellent notes covering background, composer and the subject matter of each scene; and all texts, translations and documentation are supplied. It's also full of photos of the performers and recording sessions, which are themselves a pleasure to behold. But the story doesn't end there, because for this Limited Edition we also get a DVD containing nearly two hours of music taken from concerts and recording sessions of Christina Pluhar and L'Arpeggiata, over the fifteen years since the group was founded in the year 2000. This is more than just a bonus – it's fabulous. So we get 26 tracks, mostly of the group performing baroque music, in some cases taking considerable liberties with the originals; and with a few other things thrown in including some rather jazzy items in jam-session style, very much in Christina Pluhar's inventive manner although not greatly to my own taste. Most of the items are baroque, however, with composers including Monteverdi, Cavalli, Kapsperger and Purcell.

All the items are lovingly filmed, with singers including Philippe Jaroussky, Raquel Andueza, Núria Rial, Hana Blazíková. I must admit I found it a particular pleasure to watch beautiful women with voices like angels, faces showing their intense concentration and involvement, as well as those of the players of course, and all filmed in finer close-up than you could possibly expect from sitting in Row 23 at a live performance. I didn't much like Pluhar's treatment of the three Purcell songs, though, simply because I love Henry's music so much that I just can't stand it being jazzed up or messed around like this. On the other hand, particular delights include the wonderfully vivid 'Ciaccona di Paradiso e dell'Infierno'; here, Philippe Jaroussky plays a distinctly goody-two-shoes advocate of paradise, engaged in a bar-room-style bickering contest with two gravel-voiced heavies representing hell - all beautifully hammed up and set to thoroughly enjoyable music. Another delight - this time a concert encore, again involving Jaroussky - sees the countertenor, taking a break at the back of the stage, unexpectedly hauled up front to join a young lady in 'El currucha', a vigorous Spanish dance. He enters admirably into the spirit and manages about as well as a middling contestant in 'Strictly Come Dancing'. Evidently he's a good sport as well as a great singer.

Altogether, this DVD disc is a tremendous bonus, not only thoroughly enjoyable to watch and to hear, but also a celebration offering valuable insights into the performance, approach and collective spirit of one of today's outstanding early music ensembles. The last three items on the DVD are beautifully performed and filmed versions of three of the Cavalli works from the CD, with both singers represented. Returning to the CD programme for a moment, then, it's perhaps worth noting that it offers a fascinating complement to the fabulous Cavalli set 'Heroines of the Venetian Baroque' by Mariana Flores and Cappella Mediterranea directed by Leonardo García Alarcón  Francesco Cavalli: Heroines Of The Venetian Baroque . Only one item is duplicated between these two recordings (T'aspetto from La Calisto) and in any case the approach of each of the two ensembles is very different. If you love Cavalli and are looking for advice on choosing one or the other set, don't ask me because I can only say this: you need both of them!
Read more
20 people found this helpful
Helpful
Sending feedback...
Thank you for your feedback.
Sorry, we failed to record your vote. Please try again
Report abuse

Graeme Withers
5.0 out of 5 stars The gang are back in form
Reviewed in the United Kingdom on November 2, 2015
Verified Purchase
Having been snapped at by other Amazon reviewers for my less-than-complimentary review of L'Arpeggiata's recent Purcell offering, I'm pleased to find them well on form with this release. Two consummate singers, and backings which are not jazz-inspired but which sizzle with Pluhar's imaginative scorings. Let's hope they perform it somewhere soon, so we can see it as well as hear it, as we can with Mediterraneo.

Get the deluxe version - the two hour history of L'Arpeggiata's first fifteen years is treasure trove too - worth the money if only for Jaroussky's incomparable version of Ninna nanna siciliana, one of he world's great melodies.

Cavalli is great to watch - try the Jacobs version of La Calisto as well - good fun. Amazon can't find it at the moment for a product link, but it's usually available.
Read more
14 people found this helpful
Helpful
Sending feedback...
Thank you for your feedback.
Sorry, we failed to record your vote. Please try again
Report abuse