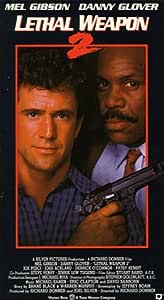 The series formula started to kick in with this immediate sequel to Lethal Weapon, but that doesn't necessarily make it a weak movie. Joe Pesci joins the fold, Richard Donner directs again, and Mel Gibson and Danny Glover return as LAPD partners, their relationship smoother now that Gibson's character has recovered from his maddening grief over his wife's death. But the reckless Mel and cautious Danny equation, good for a million laughs, settles into place in this story involving a South African smuggler and a new girlfriend (Patsy Kensit) for Gibson. The movie is hardly comfy, though. The last act gets nasty, and a climactic fight between Gibson (who gets the worst of it) and some high-kicking villain is ugly. The DVD release includes production notes, Dolby sound, theatrical trailer, optional full-screen and widescreen presentations, optional French soundtrack, and optional English, French, and Spanish subtitles. --Tom Keogh --This text refers to the dvd edition.