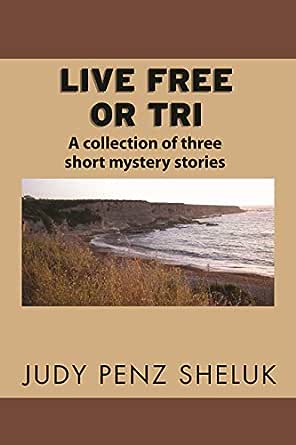 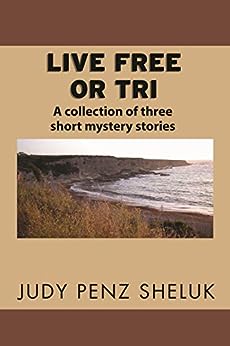 Judy Penz Sheluk's debut mystery, THE HANGED MAN'S NOOSE, was published July 2015 by Barking Rain Press. Her short crime fiction is included in The Whole She-Bang 2, World Enough and Crime, Flash and Bang and Live Free or Tri: a collection of three short mystery stories. Judy has also contributed to two multi-author cookbooks, Bake, Love, Write, and We'd Rather Be Writing. Judy is a member of Sisters in Crime, Crime Writers of Canada, International Thriller Writers, and the Short Mystery Fiction Society. --This text refers to the paperback edition.
click to open popover

4.7 out of 5 stars
4.7 out of 5
9 customer ratings
How does Amazon calculate star ratings?
Amazon calculates a product’s star ratings using a machine learned model instead of a raw data average. The machine learned model takes into account factors including: the age of a review, helpfulness votes by customers and whether the reviews are from verified purchases.
Top reviews

Janice J. Richardson
5.0 out of 5 stars Delicious read
Reviewed in Canada on January 10, 2019
Verified Purchase
Short story writing is an art and this author has mastered it. Almost missed my bus stop because I was so engrossed.
Read more
Helpful
Comment Report abuse

Victoria
5.0 out of 5 stars Tried it!
Reviewed in Canada on January 19, 2016
Verified Purchase
A fun set of snappy short stories by an incredibly versatile writer. Ms Sheluk appears to have mastered the art of adaptability in her various stories and demonstrates a strong voice with a bite of humour. Really clever story telling. Who knew triathlon could be so dangerous.
Read more
Helpful
Comment Report abuse

Kelly Kenrick
5.0 out of 5 stars Short and to the point!
Reviewed in Canada on June 15, 2020
This is a trilogy of short stories. Quick and easy to listen to.

Jack joins a collection agency to look into making things better; he mets up with one of the employees and starts a relationship. Then she finds out that he's engaged to someone else. This is what could happen when you get caught.

Murder in the Marsh

Carrie Ann is training for a triathlon in the Marshes near her home, learning how to ride a bike for the event when she runs into a crate full of carrots, and a body. This is a tale of a woman who doesn''t except defeat.

A group of triatheletes practicing swimming in Georgian Bay when one of them turns up dead. What would you do to become the best, and win?

Quite enjoyed these three short stories (the audiobook was only an hour long). Love how Judy Penz Sheluk is able to encapsulate the essence of murder so compactly.
Read more
Helpful
Comment Report abuse

Aurora Dawn
4.0 out of 5 stars Three Great Murder Stories
Reviewed in Canada on June 11, 2020
Three stories of murder set in Toronto and the hinterland. There's not much mystery to any of the three, partly because they are short stories without much room for the amateur sleuthing fans of Judy Penz Sheluk will have come to expect if they're familiar with her two series, but they're all interesting tales that provide a useful sampler for a reader searching for a new author. All three are well written with the same chilling, "no charges ever filed" underlying theme.
These are ideal for a short trip on the bus or for a late night scare before bed, if you're into that kind of thing.
Read more
Helpful
Comment Report abuse
See all reviews from Canada

Kathleen C.
5.0 out of 5 stars “Live Free or Tri” earns 5/5 Triple Scoops of Mystery!
Reviewed in the United States on February 15, 2018
Verified Purchase
Judy Penz Sheluk has penned three delightful short mysteries that provide entertaining twists and turns on murder. All three stories are written from the first-person perspective, her characters innocent bystanders often with theories that might not be enough to serve up justice. The descriptions give a visual picture of the Canadian landscape, and along with realistic dialogue the three stories are engaging.

“Live Free or Die”
This was my favorite with our heroine Emerald, preferring Emmy, being taken in by Jack, the handsome blue-eyed efficiency expert brought in to the company to make them more…efficient. However, after a delightful lunch, they strike up a relationship. He asks her to keep their relationship a secret sparing her from the gossips and HR scrutiny, but it turns out it may be to cover up evidence of his womanizing ways. She is shocked to find the truth about his “single” status, and his fiancé Jill (yes, Jack and Jill) devises a plan of action to force him to mend his ways. Plan A isn’t realistic since it might earn them 25 to life, but Plan B is quite creative. “Live Free or Die” earns 5/5 Bites of Karma!

“Murder in the Marsh”
Carrie Ann Camack has decided to join boyfriend Jasper in a triathlon, but her skill with the clipless pedals requires more practical application. He suggests she head out to Holland Marsh where the flat farm land will be perfect for her needs. However, an off-road crash into crates of carrots reveals more than carrots have been harvested. A dead bank has been foreclosed on. “Murder in the Marsh” earns 5/5 Crates of Karma’s Carrots!

“The Cycopaths”
What could possibly happen when you get a bunch of Type A personalities together in the freezing water? Not much, but…murder? A group of woman, dubbed the Cycopaths, are training for the opening triathlon of the season by practicing their open water swim, but Cordelia ‘Sunny” Lemay, the Miss Congeniality of the group, ends up dead. Lots of suspects due to proximity, but motive? “The Cycopaths” earns 5/5 Green Bathing Caps!
Read more
Helpful
Sending feedback...
Thank you for your feedback.
Sorry, we failed to record your vote. Please try again
Report abuse

“Live Free Or Die” starts off the book where the 31 year old Jack comes to Don Mills, a suburb of Toronto, Canada. He is ostensibly there to help with their collection rates having been sent by the US Headquarters down in Portsmouth, New Hampshire. After taking each staff member of the credit department out to lunch he finally gets to 21 year old Emmy. If you already know what probably soon happens you would be right. It is a classic tale of the bad man fooling around with the naive and far younger female employee. It is the aftermath where things go very differently than what one would normally expect in such a tale.

Thirty miles outside of Toronto and a world apart is the Holland Marsh. The rural area does not have grid locked traffic, high rise condos, or all the rest of the big city nonsense. It does have seven thousand acres of rich farm county that supports crops and a few locals. It also has the isolation relatively free of traffic to make learning the special skills of how to ride a bike in a triathlon.

For Carrie Anne Camack the swimming and running parts of the triathlon she can handle. Mastering the proper technique of the clipless pedal has been far more difficult. It isn’t very long till the event in July which is why she is out and about this early Sunday morning in the spring. She had a training plan and that did not include finding a body in “Murder In The Marsh.”

A triathlon also serves as the backdrop to the final story titled “The Cycopaths.” The Cycopath Triathlon Team is working the icy waters of Sunset Point Park in Colling Wood, Ontario near Lake Huron’s Georgian Bay. Half dozen swimmers went into the water for the 750 meter practice course, but not everyone came back out of the cold water alive.

These three fast reads in Live Free or Tri: A collection of three short mystery stories feature a lot of depth and plenty of mystery. The characters involved in the tales have plenty of backstory that skillfully comes into play as the story works forward in real time. Each mystery is complex with more than one small twist the result is a highly entertaining read from start to finish.

Material was recently made free to all on Amazon in e-book format where I picked it up to read and review.

RJPetyo
4.0 out of 5 stars Mysteries Well Done
Reviewed in the United States on August 21, 2019
Verified Purchase
These mysteries are well written. Lots of character and action is packed into a few pages. Nice job.

I was all set to say the title story was my favorite until I read "The Cycopaths" (great title.)
Read more
One person found this helpful
Helpful
Sending feedback...
Thank you for your feedback.
Sorry, we failed to record your vote. Please try again
Report abuse

Gail M Baugniet
5.0 out of 5 stars Well Worth Five Stars
Reviewed in the United States on September 21, 2018
Verified Purchase
Short stories usually do not include much detail but Sheluk managed to offer colorful background, well-defined characters, and a few surprises in these tightly-packaged mysteries. Fun and fast reads.
Read more
Helpful
Sending feedback...
Thank you for your feedback.
Sorry, we failed to record your vote. Please try again
Report abuse

Mystery/suspense lover
5.0 out of 5 stars Thrilling and chilling --
Reviewed in the United States on August 30, 2016
Verified Purchase
All three mysteries in this collection are power-packed with tension and suspense. Perfect for a quick read.
Read more
Helpful
Sending feedback...
Thank you for your feedback.
Sorry, we failed to record your vote. Please try again
Report abuse