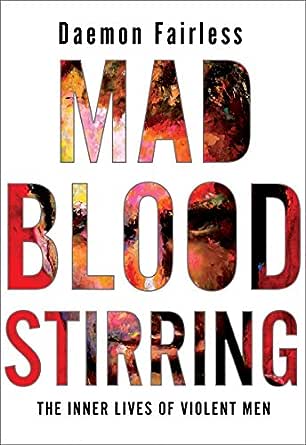 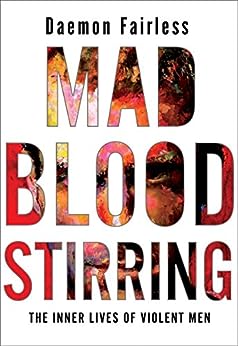 SHORTLISTED FOR THE 2019 EDNA STAEBLER AWARD FOR CREATIVE NON-FICTION

“Mad Blood Stirring is an unsettling but propulsive investigation into the roots of male violence. Daemon Fairless seeks to discover the influence of nature versus nurture, juxtaposing discussions of neuroscience and genetics with the personal stories of killers, rapists and mixed martial artists, and their reflections on the role violence plays in their lives. He frames his research with a raw and revealing personal narrative about his own life-long violent urges, played out at home, in boxing rings and on the street, that is both compelling and haunting.” —Edna Staebler jury citation

“The personal access in Mad Blood Stirring is the core of the book, and the reader’s entry point to this exploration of violence. In the chapters to come, Fairless keeps an eye on his own experiences and emotions while going down the pit, level by level, to investigate the evolutionary and behavioural impulses that lead to male violence. A former journalist for the CBC, Fairless spends time with professional MMA fighters, a high school football coach and his team in an impoverished area of Toronto, a criminal on the lam, a serial rapist, and a murderous psychopath locked up in a maximum security mental health centre in Penetanguishene, Ontario. What the author learns from these interactions is relayed empathetically, but it is never finessed or glossed over. And, by looking directly at these violent men and actions, Fairless provides an unusual insight into a topic that most people rarely engage with in earnest.” —Kevin Hardcastle, author of In the Cage, Hazlitt

“Daemon Fairless’s Mad Blood Stirring is a brave tour not just of the inner lives of some violent and terrifying men, but of masculinity’s darkest corners. It is as alarming to read as it is compelling.” —Ian Brown

“Why do men fight? Why do men rape? Why do men kill? In Mad Blood Stirring, Daemon Fairless dives into the lives of fighters, rapists and killers, as well as digs into the science, to let us ‘in’ to the pandemic of male violence and the gendered nature of violence. He spares no one, least of all himself; his writing is generous, feminist and at times poetic. I wrote many exclamation marks and notes in the margins, including ‘Thank you.’” —Jane Doe, activist and author of The Story of Jane Doe: A Book About Rape

“Mad Blood Stirring is a courageous and deeply insightful exploration of the male appetite for violence. By turns harrowing, dismaying and fascinating, this book stands alone in the humility and intelligence with which it examines this most difficult of subjects.” —Kevin Patterson, author of News from the Red Desert

“Daemon Fairless has written an urgent, compelling account of what makes many men tick. Anyone who cares about men—a son, brother, father or romantic partner—should read this book.” —Susan Pinker, psychologist, author of The Sexual Paradox --This text refers to the paperback edition.

DAEMON FAIRLESS is a writer and journalist with a master's degree in neuroscience, who has worked as a producer on CBC Radio's flagship current affairs show As It Happens, and as a print journalist for the science journal Nature. He lives in Toronto with his wife and daughter. --This text refers to the paperback edition.