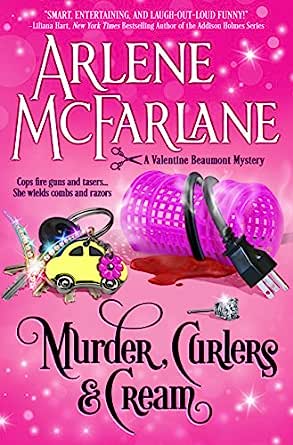 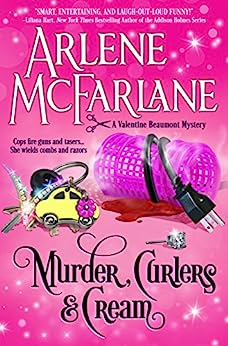 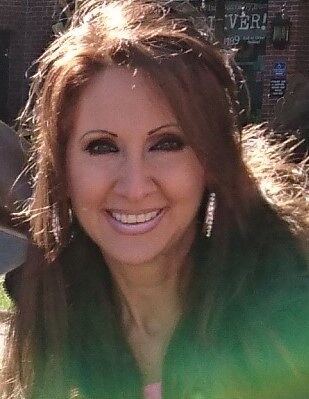 Arlene McFarlane is the author of the Murder, Curlers series. Previously an aesthetician, hairstylist, and owner of a full-service salon, Arlene now writes full time. When she’s not making up stories or being a wife, mother, daughter, sister, friend, cat-mom, or makeover artist, you’ll find her making music on the piano. Arlene lives with her family in Canada. --This text refers to the paperback edition.

4.3 out of 5 stars
4.3 out of 5
2,189 global ratings
How are ratings calculated?
To calculate the overall star rating and percentage breakdown by star, we don’t use a simple average. Instead, our system considers things like how recent a review is and if the reviewer bought the item on Amazon. It also analyzes reviews to verify trustworthiness.
Top reviews

Sandee L
4.0 out of 5 stars A funny and cute cozy mystery
Reviewed in Canada on August 13, 2020
Verified Purchase
A funny and cute cozy mystery. Valentine is working hard to make her beauty salon a success when one of her clients dies in her shop. Valentine is just as hard working when it comes to clearing her name. The characters are all fun except I didn't like her useless cousin. I didn't like this character and I still don't understand why she is in this story. But that is minor. The mystery is good and the requisite detective love interest is handsome and sexy. I'm looking forward to reading more from this series.
Read more
Helpful
Report abuse

cozyfan
3.0 out of 5 stars Not great but could provide an evenings entertainment.
Reviewed in Canada on June 9, 2018
Verified Purchase
Probably 3.5 stars. A Nice but unrealistic story. It switched into a romance part way through. Even though Portia was rather horrid, as the story progressed Val was making nearly as many enemies. Yes she did volunteer work for children and seniors, but she had the tact of a rhinoceros while poking into the murder and asking questions .It was a wonder she survived. There were some humorous moments thanks to Phyllis. The cast of characters was long and sometimes confusing. The main characters were well described and believable. I felt that the romance evolved too quickly and the conclusion, while it surprised me, seemed rushed.
Read more
Helpful
Report abuse

Ezzy
4.0 out of 5 stars Perm rods and hair chopsticks make dangerous weapons
Reviewed in Canada on April 23, 2019
Verified Purchase
Kept me guessing. I like Valentine, she's smart and a little unpredictable. Has all the elements I enjoy in a mystery, handsome cop, woman sleuth who refuses to give up, who is also compassionate and brave, lots of funny parts with a useless employee, a bit unbelievable but that's the kind of humour in this book.
Read more
Helpful
Report abuse

Chuck Kanuck
4.0 out of 5 stars A delightful whodunnit.
Reviewed in Canada on December 28, 2018
Verified Purchase
The protagonist, Valentine, is a feisty beautician who antagonizes the police because she needs to uncover a killer but the cops think she’s getting in the way. While her methods may be somewhat awkward, her antics often hilarious, she always dresses to the nines and somehow saves the day. Enjoy.
Read more
Helpful
Report abuse

Mary Hamilton
5.0 out of 5 stars Witty and Whimsical Novel
Reviewed in Canada on May 20, 2019
Verified Purchase
Arlene has a wonderful way with the witty and the whimsical. Valentine is a character that perhaps some of us aspire to be? She’s engaging, comical, and gorgeous. Ok, so maybe I wouldn’t like to wear her 4” heels! I have read most of Arlene’s books now and feel that I have a personal relationship with Valentine and her beaux. Arlene’s work makes me look forward to her next novel!
Read more
Helpful
Report abuse

Jenilyn
5.0 out of 5 stars Beautician Super Sleuth
Reviewed in Canada on June 28, 2017
Verified Purchase
Valentine Beaumont is quirky and lovable and you find yourself rooting for her to succeed; in her business, her bizarre adventures, and especially her love life!
All of the characters are boldly unique and the storyline is so intriguing; it will keep you guessing right to the end. Arlene has written a very detailed, creative, and thoughtful book.
I enjoyed this first book in the Murder, Curlers series and look forward to reading the second; Murder, Curlers, and Canes.
Highly recommend!
Read more
Helpful
Report abuse

KJ
5.0 out of 5 stars A fun read
Reviewed in Canada on May 9, 2018
Verified Purchase
This is a fun easy read, following the usual 'amateur sleuth meets sexy cop, gets into trouble and solves the crime' formula. It's well written, with likeable leads characters, and the plot moves at a nice pace.
Read more
Helpful
Report abuse
See all reviews

Mrs. Bruce
3.0 out of 5 stars Too "fluffy" for me
Reviewed in the United Kingdom on July 22, 2018
Verified Purchase
For me, there was way too much of Valentine (Val) lusting after the "hot" Detective Romero, even though she thought
he disliked her. Every time she saw him or thought about him, her knees gave way, she had hot shivers, sexy thoughts,
etc. - you get the picture. There was no sex or swearing though, which was a plus.

Apart from that it was rather repetitive with Val wondering which of the many people who hated Portia had actually killed her.
She discussed this with her staff, her cop sister, Romero and even the suspects. I admit I didn't guess the killer.
Val put herself into danger many times, despite Romero's warnings and much to his despair.

There was also too much about her makeup and clothes, particularly her shoes. I expect this part of the book and the
"hot men" (there were several in the book) would appeal to teenage readers. And I couldn't believe that any employer would
put up with Phyllis. Val's business would have been healthier if she had paid Phyllis to stay away!
It was a quick read and will appeal to a lot of people, but too fluffy for me.
Read more
3 people found this helpful
Report abuse

Kindle Customer
5.0 out of 5 stars The beauty business can be a killer
Reviewed in the United Kingdom on May 3, 2018
Verified Purchase
Loved it. Humour and emotion crafted into a great plot that will have you enthralled from the start. Her business is everything to her as she has put her heart and soul into her spa. However all this could be taken away from her shortly when she finds her best client dead on the massage bed. Okay the culprit was dead easy to spot but I loved the way she stumbled through the investigation until she got to the truth. She is tenacious and determined to save her business even when faced with the hunk that is the lead detective. Some great amusing situations and some great red herrings. A wonderful read, glad I took the risk of reading a new author.
Read more
2 people found this helpful
Report abuse

Perkins
3.0 out of 5 stars Some humour in this light read but not much of a mystery
Reviewed in the United Kingdom on September 14, 2018
Verified Purchase
Valentine Beaumont is struggling to keep her beauty salon afloat and the murder of one of her regular clients shouldn't help matters but inexplicably, it apparently does. The best thing about this unlikely tale is the burgeoning romance between Valentine and the smoking hot Detective Romero. Otherwise, the murderer is pretty obvious, Valentine's pathetic attempts at amateur sleuthing are, well, pathetic and the ridiculous notion that anyone in the police force would want to encourage her detecting ambitions are, without doubt, ridiculous. The appalling Phyllis fails to add any humour and no decent employer would or could ever allow an employee to treat her clients so badly. In fact, I'd be surprised if there weren't excellent grounds for some of Phyllis's victims to sue for assault. Both Max and the so-called 'Sensei' are stereotypical and add little to the storyline. Not the best book of its type in the Cozy series.
Read more
One person found this helpful
Report abuse

Kindle Customer
4.0 out of 5 stars How is she still going
Reviewed in the United Kingdom on February 23, 2020
Verified Purchase
Four stars for a thoroughly great read but oh my gosh how does she actually survive. Valetine is a really good character who cannot let anything go. She tries her best and has the best of intentions and sees only the best in people. Struggling to keep her business afloat with a murderer about, townsfolk adding heir bits and boy is she suspicious of people. Really a danger to herself but in a cute way. No amount of family pressure would make me keep Phylis on as an employee. She was hopeless.
Read more
Report abuse

Lucii book-lover Dixon
5.0 out of 5 stars Fun and lighthearted!
Reviewed in the United Kingdom on January 6, 2019
Verified Purchase
This is the first story I’ve read from this author and I loved it! I always find these kinds of mysteries fun and light hearted. It was hilarious! Who new so much damaged can be caused via perm rods and chopsticks?

The characters were all likeable, bar Phyllis of course. I didn’t like when Romero used the word ‘Honey’, it didn’t make him very manly as I was made out to believe throughout the book. But Valentine was such a loveable character, she reminded me of the the main character in Legally Blonde.

I never suspected the outcome at all! I was so so surprised and I won’t spoil it for others.

This was a fantastic read and I’m already off to get the next one!
Read more
Report abuse
See all reviews
Fast, FREE delivery, video streaming, music, and much more
Prime members enjoy Free Two-Day Shipping, Free Same-Day or One-Day Delivery to select areas, Prime Video, Prime Music, Prime Reading, and more.
> Get started
Back to top
Get to Know Us
Make Money with Us
Amazon Payment Products
Let Us Help You
EnglishChoose a language for shopping. CanadaChoose a country/region for shopping.
© 2008-2020, Amazon.com, Inc. or its affiliates