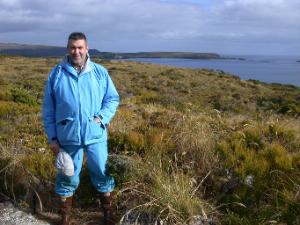 Excellent book that will undoubtedly increase awareness and appreciation of myxomycetes. I recommend it highly. -- D.S.H., Mycotaxon, April-June 1995

The aim of this book is to introduce slime moulds to the public and this it does admirably. -- A. Feest, New Phytol, Vol 132 1996

This handbook goes a long way toward revealing the otherworldly beauty of the myxomycetes. -- HortIdeas, March 2000

This handbook should certainly stimulate interest and study of the myxomycetes. -- Vernon Ahmadjian, The Bryologist, Vol 98 1995

Steven L. Stephenson, a professor at the University of Arkansas, has collected and studied fungi for more than thirty-five years, and his research program has taken him to all seven continents and every major type of terrestrial ecosystem.

4.6 out of 5 stars
4.6 out of 5
37 global ratings
How are ratings calculated?
To calculate the overall star rating and percentage breakdown by star, we don’t use a simple average. Instead, our system considers things like how recent a review is and if the reviewer bought the item on Amazon. It also analyzes reviews to verify trustworthiness.
Top reviews

David B Richman
5.0 out of 5 stars As Strange as Any Life from Mars Could be!
Reviewed in Canada on March 25, 2004
The slime molds are generally little noticed, but very strange life forms that could easily fit in a science fiction book. The swarm cells and myxamoebae unite to form first an amoeboid zygote, then the strange, crawling, plasmodium stage, and finally the fungus-like fruiting body. The plasmodia can be (in the case of Fuligo) large yellow pulsating crawling blobs that suddenly appear on people's lawns. Others are less noticeable, but often brightly colored. I have seen one of these plasmodia in my life- a bright pink blob that disappeared into the ground when I raised a rotting log in the Pinaleno Mountains of Arizona. I was certainly startled!
Stephenson and Stempen have written an excellent book on these strange critters in "Myxomycetes: A Handbook of Slime Molds." It fills a gap in the literature on natural history. It is my hope that more people will be able to appreciate these neat organisms through the descriptions, excellent line drawings and well-rendered color plates.
I will disagree with one reviewer's dislike of the describer's name after the scientific name, however. It is there for the convenience of other taxonomist as least as much as the vanity of the describer. If I know that Physarum nutans was described by Persoon it tells me something about where I should look for the original description and may also give me some idea of when the name probably originated. Also Physarum cinereum (Batsch) Persoon tells me that Batsch wrote the original description, but placed the species in a different genus, which was than changed to the present genus by Persoon. Thus such "vain" additions are often important to other workers in the field.
I do agree with the same reviewer that some further discussion of how slime molds are classified might have helped an otherwise excellent book. However, I am also fully aware that the classification is still in flux and no final answers may yet be possible until DNA studies are done (and maybe not even then!).
Read this book if you find the weirdness of the world fascinating! Better still, use it to find and identify slime molds. Good hunting.
Read more
One person found this helpful
Helpful
Report abuse
See all reviews

srhybfjgyujytgkjl
4.0 out of 5 stars Very niche but very useful
Reviewed in the United Kingdom on December 2, 2019
Verified Purchase
Hand drawn illustrations don't quite have the visual appeal of a photograph but they're informative and helpful. You really do have to be quite heavily into your myxogastria to find any utility in a book this niche but if you are it'll be handy.
Read more
One person found this helpful
Report abuse

A reader of fact and fiction
4.0 out of 5 stars Great book - for somebody else than me
Reviewed in the United Kingdom on April 17, 2013
Verified Purchase
I was looking for a easy-to-approach book about how myxomycetes live. Especially the "hive-mindish" behavior was very interesting for me. This book is more aimed to a hard-core fan, with quite much detail in taxonomy and species distinctions. Take the word "handbook" in the title in most literal meaning, and you won't disappoint.
Read more
2 people found this helpful
Report abuse

David Meadows
5.0 out of 5 stars Myxomycetes
Reviewed in the United Kingdom on January 20, 2012
Verified Purchase
This is a very good book for those interested in putting a name to a very unusual organism,that most people would not recognise. They are ubiquitous,if you know where to look.
Read more
One person found this helpful
Report abuse

M.Valentine
3.0 out of 5 stars Myxomycetes Hand Book of Slime Moulds
Reviewed in the United Kingdom on May 17, 2011
Verified Purchase
A useful introductory book on the subject, although the "colour" plates are reproduced in black and white in this paperback edition, which detracts from both the aesthetic appeal of the book, and value of the plates in species identification.
It is also worth noting that pages 95 and 96 are bound into the book in the wrong order, merging and confusing the species descriptions of both Ceratomyxia fruticulosa and Clastoderma debaryanum.
Overall, the book provides useful information on the subject, and, with the caveat that this is a wholly black and white edition, the individual species descriptions and illustrations are excellent.
Read more
5 people found this helpful
Report abuse
See all reviews
Pages with related products. See and discover other items: handbook of microbiology
Fast, FREE delivery, video streaming, music, and much more
Prime members enjoy Free Two-Day Shipping, Free Same-Day or One-Day Delivery to select areas, Prime Video, Prime Music, Prime Reading, and more.
> Get started
Back to top
Get to Know Us
Make Money with Us
Amazon Payment Products
Let Us Help You
EnglishChoose a language for shopping. CanadaChoose a country/region for shopping.
© 2008-2021, Amazon.com, Inc. or its affiliates