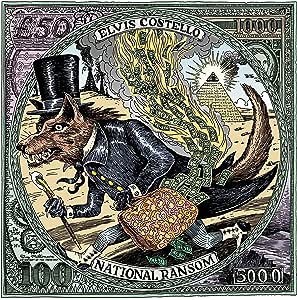 2010 album from the veteran British singer/songwriter. National Ransom was recorded in a total of eleven days at Sound Emporium, Nashville and Village Recorders, Los Angeles and was produced by T Bone Burnett and engineered and mixed by Michael Piersante at Electromagetic, Los Angeles. All of these songs are newly composed by Costello with the exception of "I Lost You," co-written with Jim Lauderdale and "All These Strangers," for which Costello and T Bone Burnett collaborated on the lyrics. Costello and Burnett also provide the lyrics for "My Lovely Jezebel," a Leon Russell Rock 'n' Roll tune . All members of the Imposters and Sugarcanes appear on the album along with guests Vince Gill, Marc Ribot, Buddy Miller and Leon Russell.

4.3 out of 5 stars
4.3 out of 5
63 global ratings
How are ratings calculated?
To calculate the overall star rating and percentage breakdown by star, we don’t use a simple average. Instead, our system considers things like how recent a review is and if the reviewer bought the item on Amazon. It also analyzes reviews to verify trustworthiness.
Top reviews

Rory Coughlan
3.0 out of 5 stars uneven
Reviewed in Canada on March 28, 2011
Verified Purchase
Costello has been ariound the block a few times now. Loved his last album - a return to some earlier styles - especially the song "Delivery Man" - but this one is very uneven. Some really strong songs - but sadly mixed in with some sentimental dross that leaves you unmoved, overall. Best to trim this album down and get rid of the bad songs - that way you can enjoy the interesting ones without dreading the stinkers
Read more
Helpful
Report abuse
See all reviews

The Punk Panther
4.0 out of 5 stars Stations of the cross...
Reviewed in the United Kingdom on November 17, 2018
Verified Purchase
After 2009's very country bluesy and folky offering in "Secret, Profane And Sugarcane", this album still remained in slightly the same vein, but there are differences. There is more rock on here, more full bass and drums, less country guitar, banjo and fiddle. More of an upbeat, fuller sound to some of the material. I much prefer this to its predecessor.

The title track is a real throwback to the glory days of The Attractions - packed full of thumping drums, swirling, parping organ, a general frenetic beat and Costello hammering out the cards and lyrics. The mood goes all 1930s jazzy with the stand up bass lament "Jimmie Standing In The Rain", one of those evocative numbers Costello does so well. "Stations Of The Cross" is a muscular, slow and dignified rock ballad, with solid bass and drums and an impassioned vocal. "A Slow Drag With Josephine" sees Costello go back to the 1920s with a number that is almost a parlour song in its vocal style. Musically, it is given some modern enhancements, with a full, rumbling bass as well as some traditional banjo and jaunty whistling.

"Five Small Words" is a pounding return to bluesy rock. There certainly wasn't anything like this on the previous album. It raises the tempo and feel of the album, something the last album failed to do. There is a catchy Cajun influence underpinning this track. Similarly, the strong, powerful "Church Underground" would not have found a place on the last album. "You Hung The Moon" is back to the 1940s with a slow torch-style song. "Bullets For The New-Born King" is another slow, reflective ballad, this time in an acoustic folk style. "I Lost You" is a catchy, mid-paced country rocker, again showing that there are lots of changes of pace and style here.

"Dr. Watson, I Presume" is a Celtic-influenced folk number with touches of Americana country rock. "One Bell Ringing" is an atmospheric, Paul Weller-influenced slow song, with some delicious deep clarinet on it at one point. "The Spell You Cast" is back to Attractions-style rock, with that "Radio, Radio" organ sound. "That's Not The Part Of Him You're Leaving" is a slow country lament. "My Lovely Jezebel" is a lively, bassy and bluesy rocker, a bit like the material on 2004's "The Delivery Man". "All These Strangers" returns to the slow, mournful ballad style. The closer, "A Voice In The Dark" is a beautiful piece of 1920s-style jazz that would have sat nicely on Bryan Ferry's "As Time Goes By". It is a delightful piece of melodic, catchy fun to end what is an innovative and adventurous album.

Elvis Costello is a bit of an acquired taste, particularly his later work, I guess you have to like him in the first place. If you do and you are prepared to travel with him through different styles you will like it. If you prefer the old new wave days, then there are plenty of complications that will suit better.
Read more
2 people found this helpful
Report abuse

Poly
4.0 out of 5 stars Good but not great
Reviewed in the United Kingdom on August 12, 2018
Verified Purchase
I’m posting this review a few months before his latest release ‘Look Now’, which I’m looking forward to and in anticipation I’ve been drawn back into the world of EC.

For me National Ransom has some beautiful moments alongside some great pop and rock music. There's ballads here to but it's the tracks like Stations of the Cross that are the standout tracks for me. Dr Watson I Presume, Bullets For The New Born King and Church Underground run Stations close. I return to these songs time after time. There are of course other great moments such as the title track, Jimmy Standing in the rain, A Slow Drag with Josephine and A Voice In The Dark, which make the album another welcome addition to any collection.
Read more
2 people found this helpful
Report abuse

Mr. David A. Norris
5.0 out of 5 stars Another Costello gem
Reviewed in the United Kingdom on October 30, 2010
Verified Purchase
I do not believe that Declan has ever made a disc that was in any way less than very good, and every so often he pops up with one which from start too finish is an absolute gem. I would at this early stage of evaluation stick my neck out and say I think this is one such. The last few discs have been good but rather one dimensional for an artist of the complexity of Elvis Costello, but this collection has it all in spades. Here we have great songwriting, fantastic performances,a great recording, some of the drum recording is stupendous, and great variety not just Americana but drawing on many more streams of influence. As has been said in other reviews EC live is awesome, and I cannot wait to hear these delivered live. It may even match up to the concert in Birmingham a few years ago where we had tickets bought very late and only ones left were front row and we thought it odd that seat next to my mate was empty, only for EC to sit in it to sing Alison! That was magical,and I am finding the same tingle from this disc, it's that good.
Read more
4 people found this helpful
Report abuse

James
5.0 out of 5 stars Excellent service and album
Reviewed in the United Kingdom on September 1, 2020
Verified Purchase
Arrived promptly today in perfect condition. Thanks so much
Read more
Report abuse

Amazon Customer
5.0 out of 5 stars NO DANCING.
Reviewed in the United Kingdom on January 28, 2016
Verified Purchase
Have every other album this god-like genius has released but somehow National Ransom passed me by. No surprise then when I hear it to be the usual high quality collection of tunes I have come to expect year after year.
Read more
Report abuse
See all reviews
Fast, FREE delivery, video streaming, music, and much more
Prime members enjoy Free Two-Day Shipping, Free Same-Day or One-Day Delivery to select areas, Prime Video, Prime Music, Prime Reading, and more.
> Get started
Back to top
Get to Know Us
Make Money with Us
Amazon Payment Products
Let Us Help You
EnglishChoose a language for shopping. CanadaChoose a country/region for shopping.
© 2008-2021, Amazon.com, Inc. or its affiliates