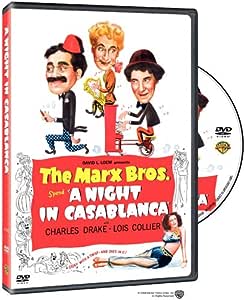 Marx Brothers comedy has them ferret out Nazi spies in a Casablanca hotel.

A Night in Casablanca may not qualify as a Marx Brothers classic, but it's certainly the best of their latter-day comedies. "This picture is funnier than all but a handful of their earlier ones," wrote the usually cantankerous Pauline Kael, and she's right. The Big Store would have been the final Marx movie, but that disappointment, and an attractive new deal with United Artists, prompted the Marx trio to bring freshly anarchic energy to this post-war spoof of wartime intrigue, prompting Warner Bros. (producers of Casablanca) to threaten legal action over the title, to which Groucho responded, "I am sure that the average movie fan could learn in time to distinguish between Ingrid Bergman and Harpo." As it happens, Night bears only passing resemblance to the Bergman/Bogart classic, with Groucho playing the new manager of a hotel in Casablanca, where several previous managers have been murdered while a scheming villain (Marx regular Sig Rumann) plots to steal the hotel's cache of Nazi treasure. Chico and Harpo are up to their usual antics (including piano and harp interludes, respectively), and they all give Rumann the runaround in the film's funniest and most perfectly choreographed scene. The brothers made their final film together with Love Happy three years later, but as any fan will tell you, A Night in Casablanca was the last Marx comedy that mattered. --Jeff Shannon

4.5 out of 5 stars
4.5 out of 5
84 global ratings
How are ratings calculated?
To calculate the overall star rating and percentage breakdown by star, we don’t use a simple average. Instead, our system considers things like how recent a review is and if the reviewer bought the item on Amazon. It also analyzes reviews to verify trustworthiness.
Top reviews

Andrew McCaffrey
4.0 out of 5 stars "You schweinhund!"
Reviewed in Canada on June 24, 2004
A NIGHT IN CASABLANCA is a film more famous for the correspondence it allegedly provoked (there's a possibility that the entire thing was a publicity stunt) between Groucho Marx and the Warner Brothers' legal department (WB stated they had a claim on 'Casablanca'; Groucho countered with a claim on 'Brothers') than for any of the gags it contained. I think this is a pity as, while it certainly can't compare to the Marx Brothers at their height, it isn't an awful film. In fact, taken on its own merits, it's quite good.
The first thing that struck me when I put on this DVD (this was the first time I'd seen the film) was how much older the Marx Brothers themselves looked, particularly Harpo. His character was always a sort of ageless clown and seeing wrinkles sort of spoilt the illusion for me. On the other hand, Groucho actually looks more in character at this age. It gives him easier access to his "dirty old man" routine, which he played perfectly.
Despite the title (and apparently the original intentions of the filmmakers), the movie doesn't have much to do with the more famous film with a similar name. The action centers in and around a hotel rather than a nightclub (Groucho is now the manager after the last few died under mysterious circumstances). The search is for treasure instead of travel papers. And, of course, instead of Humphrey Bogart and Ingrid Bergman as the romantic couple, we have bland Zeppo-replacement and bland Zeppo-replacement's bland girlfriend. Well, we can't have everything.
While most of the secondary cast is uninspired, it is nice to see Sig Ruman and his eye-popping indignation back again after his stints in A NIGHT AT THE OPERA and A DAY AT THE RACES. His over-the-top, sputtering reactions almost make up for the lack of Margaret Dumont. In the sequence where he's trying to pack his suitcases and trunks while the Marx Brothers invisibly impede his progress, he helps turn a great scene into a classic one.
The joke writing in this movie is quite strong compared to some of the other MGM Marx features. In particular, Groucho's one-liners are at full strength; I have this movie on in the background while I type up this review, and I'm catching hilarious little jokes and double entendres that I missed the first time around. And while some of the gags have the hint of unoriginality about them, there's enough that's fresh. Sure, the scene of Harpo pantomiming that Groucho was about to be blackmailed by a femme fatale had already been done in A DAY AT THE RACES, but they wisely don't use the same lines to fuel the jokes (although strangely they do use the same music: both Groucho seduction scenes feature Johann Strauss' "The Blue Danube"). The same is true for the crowded dance-floor sequence that mimics the crowded stateroom scene from A NIGHT AT THE OPERA. Same premise, but different funny jokes.
The DVD extras are nothing special. I suppose someone must be enjoying the vintage cartoons that they're putting on these Marx Brothers DVDs, but that person isn't me. The extras aren't important anyway; unfortunately, they don't add anything to the experience. Picture and sound quality are both excellent for a film of this age.
This movie may come from the less celebrated portion of the Brothers' career, but to my surprise I really enjoyed it. No film can go wrong that features a scene of Harpo Marx grinning madly at the controls of an airplane. If you go in expecting DUCK SOUP, then you might be disappointed. But if you take it for what it is rather than what it isn't, you'll find a film that's funnier than most.

peterfromkanata
4.0 out of 5 stars The Fab Three.
Reviewed in Canada on May 25, 2004
While "A Night in Casablanca" is not the Marx Bros. at their best, it still has enough chuckles and gags to amuse Groucho, Chico and Harpo's legion of fans. Sure--it doesn't compare to "Horse Feathers", "Monkey Business", "Duck Soup", "A Night at the Opera" or "A Day at the Races"--but--to be fair--how many comedies do ?
All three of "Minnie's boys" have a chance to shine in this wacky hotel farce set in "exotic" Casablanca. What fans will appreciate most is that the Marxes are on screen for most of the film. For this viewer at least, some of their MGM films were spoiled by saccharine romantic sub-plots, with some boring young tenor of the day crooning to a starlet. While there is some music in this film--including expected turns on piano by Chico and on harp by ( duh ) Harpo--it doesn't detract from the fun.
Groucho shines as the new hotel manager--Harpo is valet to a very suspicious-looking German ( Sig Ruman, hamming it up wonderfully )--Chico seems to be a con-man, intent on ensuring that Groucho does not meet the same nasty fate of previous hotel managers. Of course, we have the usual number of pompous, arrogant people who run head-long into Groucho's rapier wit. I did miss Margaret Dumont though.
The quality of the DVD is excellent--crisp B & W picture--clear mono sound.
Groucho, Chico and Harpo were quite simply three of the funniest human beings of the 20th century. While "A Night in Casablanca" is not a top-tier Marx movie, it will still provide you with a lot of amusement, and deserves a spot in your classic comedy DVD collection.
Read more
Helpful
Comment Report abuse

Joseph Hart
4.0 out of 5 stars Pretty funny
Reviewed in Canada on May 20, 2004
Except for the numbers with the clothes and the airplane which were comical at first but then endless, I think this movie almost ranks with their first 5 (or 4 not counting Duck Soup, which I don't). It was really funny. The brothers were a little long in the tooth by 1946 and it showed, which made their capers seem more childish and dumb than childlike and elfin, but I thought the flick was pretty funny. It was a serious plot (murders, nazis), and once again Harpo got knocked around instead of doing his usual former fey bit of chasing and scaring the pants off girls. The old Marx trademarks were gone (except once, Harpo put a girl's thigh into the palm of his dangling hand, but alas, it was only to catch her cigarette in his shoe, and she wasn't annoyed), but I laughed a lot, didn't recognize the names of the authors, liked Harpo's and Chico's musical numbers, liked all the sight gags, thought some of the lines (a lot of them, actually) were really witty and generally had a good time. I think these (except the 7 disc set which I haven't seen) are the only DVDs of these movies available, but I'll tell you anyway that there are (at least not in Opera or Casablanca) no papers in the DVD cases with notes or scene indices. They are nicely done sets, but I thought that was a little cheap, especially considering what these flicks cost. One last note. The first 5 Marx Bros movies were crowded, loaded, rife with incidents and pranks and jokes and stuff. This and Opera (I bought but have yet to watch Races) seem pretty thin, sparse and barren, particularly in comparison.
Read more
Helpful
Comment Report abuse
See all reviews

Michael S. Stewart
5.0 out of 5 stars A Marx Bros. Classic
Reviewed in the United Kingdom on July 23, 2014
Verified Purchase
Of course it is dated, but then what else would one expect (1946 vintage) but it is still a Marx Bros classic. It looks a bit like a take off from the Bogart - Bergman film at first but soon wanders away from that.
It has everything one could wish for, from the musical expertise of both Chico and Harpo - the former on the piano and the latter on the harp - to well timed slapstick (See the suitcase packing sketch) Plus of course, plenty of smart one-liners from Groucho.
This I understand was the last film they made together and was only made to help Chico who was short of money, due to his expensive hobbies of women and gambling. So "out of evil cometh good", as they say !
Read more
3 people found this helpful
Report abuse

david chinna
3.0 out of 5 stars whose sorry now
Reviewed in the United Kingdom on July 28, 2018
Verified Purchase
amusing takeoff of other film
Read more
Report abuse
See all reviews
Fast, FREE delivery, video streaming, music, and much more
Prime members enjoy Free Two-Day Shipping, Free Same-Day or One-Day Delivery to select areas, Prime Video, Prime Music, Prime Reading, and more.
> Get started
Back to top
Get to Know Us
Make Money with Us
Amazon Payment Products
Let Us Help You
EnglishChoose a language for shopping. CanadaChoose a country/region for shopping.
© 2008-2020, Amazon.com, Inc. or its affiliates