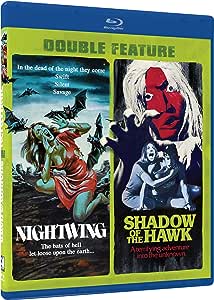 4.4 out of 5 stars
4.4 out of 5
125 global ratings
How are ratings calculated?
To calculate the overall star rating and percentage breakdown by star, we don’t use a simple average. Instead, our system considers things like how recent a review is and if the reviewer bought the item on Amazon. It also analyzes reviews to verify trustworthiness.
Top reviews

KoD
3.0 out of 5 stars Good Deal on a Pair of Fun Bad Movies
Reviewed in Canada on May 24, 2019
Verified Purchase
To start I want to say that both of these movies are very cheesy, cheap and shoddy looking special effects, hammy acting and illogical stupid scripts. That being said, lovers of cheesy B movies will really enjoy this disc. I saw both of these movies at the drive-in when I was a kid and have to admit I watched them both with a smile on my face, the transfers are far from perfect, but for 10$ they are worth the price. I hate that Mill Creek goes the cheap route every time, but for movies like these its a good fit, if they had of been on Shout they would have been 25$ each or more, and they are not worth that.
Read more
One person found this helpful
Helpful
Comment Report abuse

RICHARD E
5.0 out of 5 stars Nice sharp picture and good sound
Reviewed in Canada on June 6, 2019
Verified Purchase
Classic Shadow of the Hawk. Like to watch this when on vacation at a cabin .
Read more
Helpful
Comment Report abuse

Amazon Customer
5.0 out of 5 stars These take me back
Reviewed in Canada on April 28, 2019
Verified Purchase
Great B movies
Read more
Helpful
Comment Report abuse
See all reviews

John Davis
5.0 out of 5 stars Worth the wait
Reviewed in Australia on November 15, 2018
Verified Purchase
I do not like Shadow of the Hawk but I love Nightwing, it was worth the wait for this to be released on Blu-Ray.
Read more
Report abuse

Celia Trimboli
4.0 out of 5 stars Nightwing / Shadow of the Hawk (Mill Creek Blu-Ray)
Reviewed in the United States on February 24, 2019
Verified Purchase
I bought this Blu-Ray only for the film Nightwing (1979). Not bad animals-on-the-rampage film, part of the post-Jaws deluge of such films. Silly at times but played straight all the way through. In a Native American (NA) economically-depressed part of the Southwest mysterious animal and people deaths are occurring and a NA cop is trying to solve them. He is also trying to stop a NA businessman from another tribe from exploiting his ancestral lands for oil. It turns out the cops foster grandfather, a tribal witch, has laid a whammy before he died and now vampire bats are now attacking at night. You also have a obsessed scientist who has a clue and maybe a way of eliminating said bats. When the scientist starts blathering about the evil of the bats I guess that's where the supernatural part of the story is supposed to kick in. The cops finally solves all problems by lighting up the oil deposits where the bats dwell. Well, that takes care of the bats and the exploiters (who would have pocketed all profits, leaving nothing for the tribe). But wouldn't burning the oil pollute the area. The scenics are beautiful, including what appears to be the Grand Canyon. The music is moody and fits the area. The Mill Creek Blu-Ray is excellent quality, and Blu-Ray and/or DVD is preferable to DVD-R. Unfortunately no extras, but recommended anyway.
Read more
7 people found this helpful
Report abuse

Einsatz
3.0 out of 5 stars “Not just bats! Vampire bats!!!”
Reviewed in the United States on January 29, 2019
Verified Purchase
Two equally strange films with a Native American theme in common. The first deals with greed complicated by the encroachment of deadly killer vampire bats infected with bubonic plague. A corrupt Tribal councilman (Stephen Macht) wants to hush up the deaths by vampire bats. A pesky deputy (Nick Mancuso) keeps getting in his way. This was a box office bomb and was critically lambasted. In the right frame of mind it’s actually quite fun. But it is crap. The second movie consists of a few baffling interludes featuring someone wearing a mask and then there is a whole lot of nothing while they take the slow road to nowhere. Basically, Old Man Hawk (Chief Dan George) is, well, old, and he wants his grandson (Jan-Michael Vincent) to take over the family business of being the Shaman of their tribe. Grandson is not receptive to the prospect of leaving the big city behind for a life of, well, no luxuries. And. Old Man Hawk has a bitter enemy who wants to kill him and his grandson. That tends to put a damper on things. Take over for me but first you have to kill a witch. This film is tediously S-L-O-W. And weird.
Read more
2 people found this helpful
Report abuse
See all reviews
Fast, FREE delivery, video streaming, music, and much more
Prime members enjoy Free Two-Day Shipping, Free Same-Day or One-Day Delivery to select areas, Prime Video, Prime Music, Prime Reading, and more.
> Get started
Back to top
Get to Know Us
Make Money with Us
Amazon Payment Products
Let Us Help You
EnglishChoose a language for shopping. CanadaChoose a country/region for shopping.
© 2008-2020, Amazon.com, Inc. or its affiliates