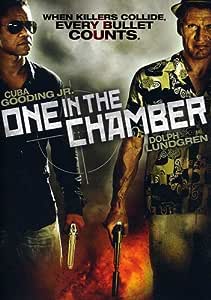 One in the Chamber

Our DVD's are newly bought from Europe and are packaged in biogradable products, ecco friendly. The plastic disc jackets brought in USA are not Ecco friendly. For the Protection of the disc we added a cardboard mailler that may be trashed on arrival to you. Edbar

4.0 out of 5 stars
4 out of 5
78 customer ratings
How does Amazon calculate star ratings?
Amazon calculates a product’s star ratings using a machine learned model instead of a raw data average. The machine learned model takes into account factors including: the age of a review, helpfulness votes by customers and whether the reviews are from verified purchases.
Top Reviews

The Action Connoisseur
4.0 out of 5 stars Exactly what I had hoped for.
Reviewed in Canada on September 28, 2016
Verified Purchase
You'd think because this is a straight to DVD release, that it automatically is a lower class movie, but Cuba Gooding is still a very good actor, and can help carry a film -- which he did well at in this film.

I actually thought the setting and directorial style was well done for a little known movie such as this.
It has all the elements of cheese that a person would want, as well as witty dialogue and gun-driven action.

The Movie Guy
HALL OF FAME
3.0 out of 5 stars FISTFUL OF EUROS
Reviewed in Canada on July 10, 2015
Ray Carver (Cuba Gooding Jr.) is an assassin for hire in Prague. He is hired by crime boss Mikhail Suverov (Andrew Bicknell) to kill the Tavanian family over a territory issue...it's all about respect. One of the Tavanians survive to the dismay of the Surverov family. This ignites a war. Surverov then hires Aleksey Andreev (Dolph Lundgren) to finish the job. Meanwhile in an ironic twist the Tavanian's hire Carver to kill his former boss the Surverov family.

The two assassins have different approaches. Ray Carver likes to keep a low profile while Aleksey wears Hawaiian shirts and usually comes in the front door. Carver works out, reads the Bible, kills people for hire, and stalks a girl. Dolph Lundgren gives the film some attempted comedy. During the opening credits, they opt to change the fonts and make the "N"s backwards. I thought it might somehow relate to the film, but it wasn't that deep.

Both these stars have done better films and Cuba has certainly done worse. The Eastern Europeans sounded like they learned English by watching Dos Equis beer commercials. The film ends at a point where there could be an interesting sequel if they bothered to hire writers.

D. Lloyd
4.0 out of 5 stars A cut above your average low budget actioner
Reviewed in the United Kingdom on September 9, 2012
Verified Purchase
Over the last decade or so, Seagal, Van Damme and Lundgren have specialised in quickly filmed, low budget action movies, designed to go direct to the home video market. Some have been awful, and some have been pleasant suprises. This film happily falls into the latter category.

Dont expect Cuba Gooding Jnr to give the best performance in this film. He may have the oscar on the shelf, and get top billing here, but this is Dolph Lundgren's movie. His character is infintitely more interesting, and he steals every scene he is in with a performance that builds on his strength in portraying unhinged/crazy characters (as he did in U-Sol, Johnny Mnemonic and The expendables movies). With Louis Mandylor playing the main villain, performances across the board are way better than we have come to expect from this type of movie.

The plot is nothing special- it has shades of Fistfull of Dollars, Last Man Standing,In Bruges and Leon, and the sub-plot involving Gooding and the lead female, is handled particularly badly, and grates against the rest of the movie, but its a little issue that doesnt spoil the experience.

The fight choreography is solid, the direction does not rely on 'shaky cam' and/or quick-cut editing, so you get to see whats going on, and the bullet wounds are done with good old fashioned squibs, rather than CGI, which at this budget, invariably ends up looking fake and cheap.

The end of the film hints at a sequel that would seen Lundgren and Gooding Jnr's characters returning for more carnage. On the evidence of this movie, I hope that they do.

Well worth checking out for fans of the action genre.
Read more
5 people found this helpful
Helpful
Sending feedback...
Thank you for your feedback.
Sorry, we failed to record your vote. Please try again
Report abuse

JAFAG
4.0 out of 5 stars Not Bad.
Reviewed in the United Kingdom on November 21, 2019
Verified Purchase
Tongue in the cheek action film, not to be taken seriously.
Usual gang war fair plot with a twist. Good to see Dolf not taking himself too seriously.
Read more
Helpful
Sending feedback...
Thank you for your feedback.
Sorry, we failed to record your vote. Please try again
Report abuse

Simon The Film Geek
3.0 out of 5 stars One In The Chamber!!
Reviewed in the United Kingdom on October 13, 2013
Verified Purchase
A seasoned assassin plays both sides in a Russian gang war and becomes the target of an unknown enemy.
The fight choreography is good, solid performances by Cuba Gooding Jr.and Dolph Lundgren keep it together keeps you watching till the end.
Overall a good solid action crime thriller. Would recommend this for fans of Cuba Gooding Jr.and Dolph Lundgren. Worth a watch.

The end of the film hints at a sequel that would seen Lundgren and Gooding Jnr's characters returning for more bloodshed.
Read more
Helpful
Sending feedback...
Thank you for your feedback.
Sorry, we failed to record your vote. Please try again
Report abuse

G.Barton
3.0 out of 5 stars Everything
Reviewed in the United Kingdom on May 27, 2019
Verified Purchase
Good
Read more
One person found this helpful
Helpful
Sending feedback...
Thank you for your feedback.
Sorry, we failed to record your vote. Please try again
Report abuse

greg pearson
5.0 out of 5 stars great film!!
Reviewed in the United Kingdom on April 18, 2014
Verified Purchase
this is an excellent action film and dolph lundgren is on top form!! also nice to see billy murray (the bills corrupt copper don beech) in the film too!! reccommend this strongly!!
Read more
Helpful
Sending feedback...
Thank you for your feedback.
Sorry, we failed to record your vote. Please try again
Report abuse

Mr Y.
5.0 out of 5 stars Five Stars
Reviewed in the United Kingdom on May 20, 2015
Verified Purchase
great thanks, trusted seller as always
Read more
Helpful
Sending feedback...
Thank you for your feedback.
Sorry, we failed to record your vote. Please try again
Report abuse

James North
5.0 out of 5 stars one in the chamber.
Reviewed in the United Kingdom on July 1, 2014
Verified Purchase
great film great price.
Read more
Helpful
Sending feedback...
Thank you for your feedback.
Sorry, we failed to record your vote. Please try again
Report abuse

Bob A
4.0 out of 5 stars Good, unpretentious action flick
Reviewed in the United Kingdom on June 25, 2013
Verified Purchase
This is a straight foward action flick, not too many twists and turns, with a more or less predictable outcome. Both Cuba and Dolph go through their respective paces with ease and it would seem enjoyment.
Read more
Helpful
Sending feedback...
Thank you for your feedback.
Sorry, we failed to record your vote. Please try again
Report abuse