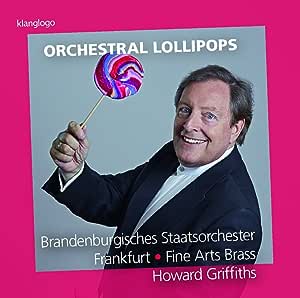 • Orchestral Lollipops with the Brandenburgisches Staatsorchester Frankfurt and Fine Arts Brass • Hits like The Typewriter, Puttin’ on the Ritz and Strike Up the Band Richard Strauss once said that ‘a composer of worth must also be able to compose a menu’. Ironically, the ‘Schlagobers’ (‘whipped cream’) ballet which he later composed was by far not as successful as the polkas and marches written by his Viennese namesake Johann Strauss. To use a sticky comparison, his work did not become a lollipop – unlike the sweet evergreen which was invented in England and has been much loved ever since. Elgar’s Pomp and Circumstance march no. 1, Anderson’s The Typewriter, and Wood’s Fantasia on British Sea Songs immediately achieved this ‘lollipop’-status: under the direction of Howard Griffiths, the Brandenburgisches Staatsorchester Frankfurt has taken a liking to these lollipops and has put them on display in this stunning recording with Fine Arts Brass. Particularly noteworthy are the pieces which commonly fall under the heading of Tin Pan Alley: among them Carmichael’s melancholic Stardust, Wright ‘Fats’ Waller’s ambiguously ironic Smashin’ Thirds and Valentine Stomp, as well as Berlin’s melodically and rhythmically extravagant Puttin’ on the Ritz. With his cover versions for Brass quintet and orchestra, Howard Griffiths erects a sounding monument to these indestructible lollipops, bursting with original flavour and subtlety.