Deliver to your Kindle Library 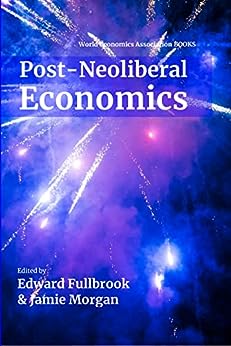 by Edward Fullbrook (Author), Jamie Morgan (Author) Format: Kindle Edition
See all formats and editions
Sorry, there was a problem loading this page. Try again.
If you feel that there is nothing new or liberal about neoliberal economics, and that neoliberal economics is to understanding capitalism what astrology is to understanding the Cosmos, read this book!
- Yanis Varoufakis, Professor of Economics– University of Athens

Fullbrook and Morgan in this excellent anthology continue to act as trust-busters in breaking up the suffocating neoliberal monopoly on academic economics by giving a venue to clearer thinking.
- Herman Daly, Emeritus Professor, University of Maryland, USA

Post-Neoliberal Economics is a triumph. It comes when the long-established neoliberal binary between “natural market” and “artificial state” has substantially lost credibility, thanks to the North Atlantic financial crisis, China, and Covid. Anyone who enjoys the company of articulate, provocative, offbeat intelligences will want to read it. Some will want to pick a fight with it.
- Robert H. Wade, Professor of global political economy, London School of Economics and
Political Science

As a project, neoliberalism remade the world; as an ideology, it became inconsistent with the very world it made. This rich heterodox volume examines the theoretical, societal, and environmental failings of neoliberalism – as well as what might and should replace it.
- Jonathan Nitzan, Professor of Political Economy at York University, Toronto

Fullbrook and Morgan have assembled an interesting collection of essays from some of the world's leading heterodox economists. It is a valuable cross-section of thinking outside of the mainstream of the profession.
- Dean Baker, Center for Economic and Policy Research, Washington D. C.

The world has become more unequal, the economy more fragile, and our existence on Earth more tenuous, because we followed the advice of Neoclassical economists who think they are capitalism's best friends, when in fact they are the greatest threat to its continued existence. We desperately need a Post-Neoliberal Economics.
- Steve Keen

This book is a must-read not only because it shows neoclassical economics’ fundamental inadequacy for understanding today’s world, but also because it outlines a new economics that can lead us to living in harmony with our ecosystem.
- Norbert Hearing, Handelsblatt

In times where good news tend to be scarce, let me celebrate the publication of Post-Neoliberal Economics; a timely collection of essays authored by key critical thinkers of the discipline, with the purpose to design a new, inspiring future for Economics as a science useful to solve the real problems of society today. This work, meticulously edited by Fullbrook and Morgan, puts forward a substantive, solid and passionately argued call to transform Economics as it currently stands in order to make it relevant to meet the crucial challenges faced by our peoples, urbi et orbi.
Of utmost important to lecturers at undergraduate and graduate levels, the book puts forward a practical blueprint to change its curricula, teaching and research practice so that students of Economics, on the one hand, keep alive enthusiastically their aspirations to make this a better world and, on the other hand, acquire the analytical and technical abilities to make such dreams come true.
- Juan Carlos Moreno-Brid, UNAM, México
Read more
Previous page
Next page

5.0 out of 5 stars
5 out of 5
3 global ratings
How are ratings calculated?
To calculate the overall star rating and percentage breakdown by star, we don’t use a simple average. Instead, our system considers things like how recent a review is and if the reviewer bought the item on Amazon. It also analyzes reviews to verify trustworthiness.