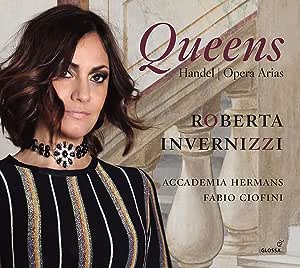 An album of Handel opera arias from Roberta Invernizzi is outstanding in its own right because it completely breaks new ground for the Milanese soprano. True, she has taken part in compelte operas on disc as on stage, and has recorded plenty of arias by other composers of the time such as Vivaldi, Leo, Porpora, Feo or Mancini. This new release from Glossa, however, sees Invernizzi reflecting Handel's special brand of emotional investigation and making her selection from th emany regal characters which pepper Handel's operas - Cleopatra, Berenice, Arianna and Alcina, among them - and their ardent, affecting, distraught and stately feelings. These are choppy waters through which Roberta Invernizzi sails with unquestionable skill: complete control of her native language and dominance of Handel's stylistic demands in canto espressivo and canto d'agilita - all being allied to her lustrous vocal tones. She finds responsive and sympathetic accompaniment from Fabio Ciofini and his Accademia Hermans, which works extensively in the Perugian Teatro Cucinelli in Solomeo. Invernizzi's majestic sweep of Handelian queens also takes us through a chequered period in the composer's career, when he led the two Royal Academies of Music in the 1720's and 1730's. At this time, he was writing for magnificent and tempestuous divas such as Francesca Cuzzoni and Anna Maria Strada del Po - a selection of their roles is to be heard on this recording.

5.0 out of 5 stars
5 out of 5
1 global rating
How are ratings calculated?
To calculate the overall star rating and percentage breakdown by star, we don’t use a simple average. Instead, our system considers things like how recent a review is and if the reviewer bought the item on Amazon. It also analyzes reviews to verify trustworthiness.

There are 0 customer reviews and 1 customer rating.
Fast, FREE delivery, video streaming, music, and much more
Prime members enjoy Free Two-Day Shipping, Free Same-Day or One-Day Delivery to select areas, Prime Video, Prime Music, Prime Reading, and more.
> Get started
Back to top
Get to Know Us
Make Money with Us
Amazon Payment Products
Let Us Help You
EnglishChoose a language for shopping. CanadaChoose a country/region for shopping.
© 2008-2020, Amazon.com, Inc. or its affiliates