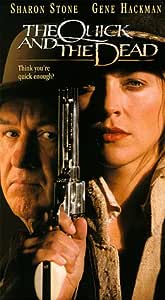 Quick & the Dead, the [Import]

Director Sam Raimi (The Evil Dead) tries gamely to recapture the exotic mysteries of spaghetti Westerns in this stylish but empty film, which stars Sharon Stone as a stranger who comes to the town of Redemption in time for an annual shooting contest. Her real motivations for being there are the stuff that might have found their way into a film by Sergio Leone--in fact, much of this film is a pastiche of Leone's greatest hits, including A Fistful of Dollars and Once upon a Time in America--but one can't quite believe Stone in the role. Gene Hackman gives a predictably solid performance as the town tyrant, and Leonardo DiCaprio is good as a lucky young gunslinger who gets to kiss the heroine. But not even the cast can help this failed project. Raimi brings a lot of razzle-dazzle to his camera work, but it doesn't make the film any more substantial. A widescreen version of the film can be seen on DVD. --Tom Keogh

4.5 out of 5 stars
4.5 out of 5
595 customer ratings
How does Amazon calculate star ratings?
Amazon calculates a product’s star ratings using a machine learned model instead of a raw data average. The machine learned model takes into account factors including: the age of a review, helpfulness votes by customers and whether the reviews are from verified purchases.
Top Reviews

Douglas Kaiura
5.0 out of 5 stars Classic Tale of Revenge!
Reviewed in Canada on July 5, 2020
Verified Purchase
Great cast including: Sharon Stone, Gene Hackman, Russell Crowe and Leonardo DiCaprio. Filmed in 2009, Stone also is a co-producer. Stone comes back to her hometown, as a young child she witnesses the murder of her father who was the sheriff, unfortunately Hackman, gang leader tells her she can save her father if she shoots the hangman's noose, she kills her father. She comes back and signs up for a gun shoot, the winner gets $153.000, Crowe plays a former associate of Hackmans who is now a preacher, he is chained up and given a chance to draw, he is given an old gun ($5,00) and only 1 bullet. DiCaprio is very young and is also a gun slinger. Loved the costumes especially western gear that Stone wears. The only person who recognizes her is the doctor. Pat Hingle plays the bartender, hotel owner. Crowe and Stone must face each other at the end shoot out and there is a great twist in the plot line. The ending is just great, Stone rides out of the town.
Read more
Helpful
Comment Report abuse

E. Conway
4.0 out of 5 stars Better then the Average Western
Reviewed in Canada on December 4, 2008
Verified Purchase
If you like Westerns then you should enjoy this movie! The big difference in this movie is that it has a female lead (Stone). She is not the best actor, or character, of the group. The directing, visuals and acting are all very good in general. The characters are all archetypes of one sort or another. Very similar in style to Clint Eastwood's Spaghetti westerns. So if you like those, you should like this as well. The big difference is this movie is more "stylised" which makes it loose some of its grit. But it has stood up well over time!
Read more
One person found this helpful
Helpful
Comment Report abuse

Miss C. Tofts
5.0 out of 5 stars BR Version
Reviewed in the United Kingdom on May 5, 2019
Verified Purchase
Always liked this film and decided to upgrade recently to BR. Much better picture quality so I am very pleased with purchase. It has Gene Hackman, Leonardo Dicaprio, Sharon Stone and a very slim and sexy Russell Crowe! Lots of gunfights and a good revenge western. What's not to like?
Read more
3 people found this helpful
Helpful
Sending feedback...
Thank you for your feedback.
Sorry, we failed to record your vote. Please try again
Report abuse

Mr. E. A. Dobson
4.0 out of 5 stars Cannot spot Bruce Campbell!
Reviewed in the United Kingdom on October 25, 2014
Verified Purchase
Sharon Stone is slightly miscast but not bad enough that she spoilt the film. Gene Hackman is wonderfully villainous and there is great support from DiCaprio, Crowe and various cameos. I think all in all it works, Raimi may not have looked like the right director for a western but he pulls it off. I'm off to YouTube, see if anyone's posted the Bruce Campbell cameo.
Read more
3 people found this helpful
Helpful
Sending feedback...
Thank you for your feedback.
Sorry, we failed to record your vote. Please try again
Report abuse

snowy
5.0 out of 5 stars Magic music magpie
Reviewed in the United Kingdom on June 1, 2018
Verified Purchase
Great service excellent quality every item excellent price every time thay are a very good people to buy from i have lots of items from music magpie brilliant every single time kind regards Alan.
Read more
One person found this helpful
Helpful
Sending feedback...
Thank you for your feedback.
Sorry, we failed to record your vote. Please try again
Report abuse

Mr. T. Walters
3.0 out of 5 stars Terrible Collective selection
Reviewed in the United Kingdom on April 29, 2009
Verified Purchase
Individually okay films but they don't go together as a triple bill. Desperado isn't a western per se; It's modern south of the border. Some lazy executive who probably never saw all these films did this and he or she ought to be fired. Silverado, Open Range, Appaloosa, . would have been a better selection for triple bill. As well as Once Upon A Time In The West High Plains Drifter, & The Quick & The Dead. El Mariachi, Desperado & Once Upon A Time In Mexico would have been a better triple bill to include the almost surreal Desperado.
Read more
5 people found this helpful
Helpful
Sending feedback...
Thank you for your feedback.
Sorry, we failed to record your vote. Please try again
Report abuse

Rambo88
5.0 out of 5 stars Very Good
Reviewed in the United Kingdom on November 16, 2018
Verified Purchase
a very good acquisition, everything impeccable.
Recommended.

Dave
4.0 out of 5 stars Good watch
Reviewed in the United Kingdom on June 22, 2011
Verified Purchase
Despite seeming somewhat one directional this is a pretty decent film that I have given a generous 4 stars as I couldnt just give it 3! It's got a wonderful cast and in fairness could have been so much better. While a little predictable it's still a good story and some strong performances from Hackman, Di Caprio and Crowe are what made this film for me. Stone is OK but not much more in a more difficult role.
Read more
One person found this helpful
Helpful
Sending feedback...
Thank you for your feedback.
Sorry, we failed to record your vote. Please try again
Report abuse

peter maddocks
1.0 out of 5 stars The quick and the dead
Reviewed in the United Kingdom on November 1, 2019
Verified Purchase
I wish to contact the sender
.

Amazon Customer
3.0 out of 5 stars Half baked spaghetti western
Reviewed in the United Kingdom on March 11, 2014
Verified Purchase
The idea of this film - an organised gunfight where the winner takes all, is one I haven't seen before and it has some great actors, but it suffers from some atrocious plagiarising of classic spaghetti western scenes and some big plot holes. There is also some very hammy acting, but overall it is worth watching to see a very young DiCaprio, and Gene Hackman as a psychopathic killer. Sadly Sharon Stone keeps her clothes on.
Read more
Helpful
Sending feedback...
Thank you for your feedback.
Sorry, we failed to record your vote. Please try again
Report abuse

Amazon Customer
5.0 out of 5 stars Five Stars
Reviewed in the United Kingdom on July 26, 2017
Verified Purchase
great cast, great story line, ive watched it over and over again and never seems old or outdated
Read more
Helpful
Sending feedback...
Thank you for your feedback.
Sorry, we failed to record your vote. Please try again
Report abuse

Mr. M. Herbert
4.0 out of 5 stars Entertaining.
Reviewed in the United Kingdom on December 6, 2015
Verified Purchase
Surprisingly entertaining film. Yes, it is cliched, but that I suspect is intentional. I am not a great fan of the western genre, but I found this one well filmed, a decent cast, a bit tongue in cheek, but still entertaining
Read more
Helpful
Sending feedback...
Thank you for your feedback.
Sorry, we failed to record your vote. Please try again
Report abuse