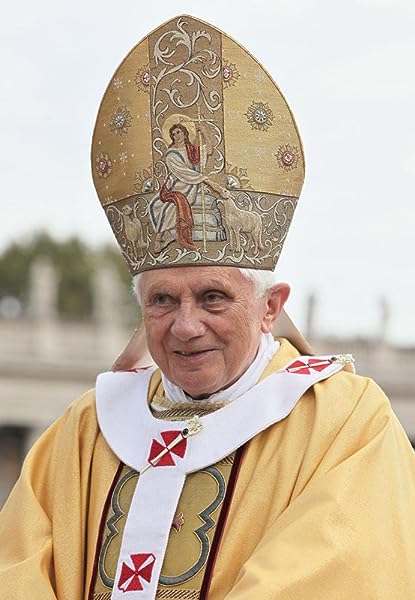 Ratzinger Report: An Exclusive Interview on the State of the Church Paperback – June 1 1985

Joseph Ratzinger (Pope Emeritus Benedict XVI) is recognized as one of the most brilliant theologians and spiritual leaders of our age. As pope he authored the best-selling Jesus of Nazareth. Prior to his pontificate, he wrote many influential books important for the contemporary Church, such as  Introduction to Christianity and The Spirit of the Liturgy.

4.6 out of 5 stars
4.6 out of 5
29 global ratings
How are ratings calculated?
To calculate the overall star rating and percentage breakdown by star, we don’t use a simple average. Instead, our system considers things like how recent a review is and if the reviewer bought the item on Amazon. It also analyzes reviews to verify trustworthiness.
Top reviews

Yalensian
5.0 out of 5 stars probably not for "beginners" but still excellent
Reviewed in Canada on February 5, 2003
I came to this book--or, rather, interview--as a person feeling the pull to Catholicism. This was probably not the best book to read this early in the journey to Rome, since it presumes something of a knowledge of the Church and its "crisis" in modern times, particularly after Vatican II--unlike, say, an introduction to Catholic theology or liturgy. In that respect, then, not being a Catholic, I was probably limited in what I could take from the book.
Nevertheless, I found it extremely fascinating and worthwhile. For starters, Ratzinger's understanding of the Church speaks directly to why I was drawn to it in the first place. He conveys a sense of the Church's community of believers, the communion of saints, emphasizing the very important communal aspects of the Catholic faith and suggesting that theology is not just a matter for individuals and academicians and "theologians"--it is pursued as a community. He describes this community, this unity quite wonderfully, I think: "harmonic wholeness."
His description as the Church going up against the powerful cultural forces of our time was also quite convincing and appealing. Indeed, the Church stands virtually alone against the tide of permissivity. Ratzinger discusses the difficulties the Church was facing in the mid-1980s, from feminism and liberation theology to the dangers of extreme individualism. His proposed solutions are probably not surprising to those familiar--among others: not an abandonment of Vatican II but a discovery of its true spirit; a re-affirmation of traditional doctrines (such as the Virgin Mary); a recognition that the Church is not democratic but sacramental and hierarchical instead; and a restoration of the virtues of motherhood and virginity.
All in all, a great survey of the Catholic Church's position in the modern world, which deals with problems as well as possible answers. Moreover, Ratzinger speaks, either directly or indirectly, to the problems facing the world in general, and his solutions could just as easily be applied in that broader context. This book, then, in many ways, transcends its intended Catholic audience--a true achievement.
Read more
4 people found this helpful
Helpful
Report abuse

Kevin M
5.0 out of 5 stars Thanks
Reviewed in the United Kingdom on February 14, 2018
Verified Purchase
Again I bought this for a friend who is an ardent fan of the author. He says he loved it.
Read more
Report abuse

Joanne Ryan
5.0 out of 5 stars Excellent
Reviewed in the United Kingdom on June 24, 2013
Verified Purchase
This is an excellent, and still relevant, assessment of the Church post Vatican II. The assessment is objective and to the point, no time is wasted getting to the heart of the issue in each answer. I actually enjoyed the book so much I ordered a longer interview with the pope emeritus, namely 'God and the World' with the journalist Peter Seewald, for an even broader range of questions.
Read more
One person found this helpful
Report abuse

佐々木博
5.0 out of 5 stars Ratzinger Report. An Exclusive Interview on the State of the Church
Reviewed in Japan on December 31, 2014
Verified Purchase
ラッチンガー長官の鋭い考察は、極めて貴重なインタビューです。
Read more
One person found this helpful
Report abuse
Translate review to English

The interviewer asked, "Can then a 'modern' Catholic again begin to read the Bible without bothering himself too much over complicated exegetical questions?'
"Certainly," [ Cardinal Ratzinger replies.]." Every Catholic must have the courage to believe that his faith (in communion with that of the Church) surpasses every 'new magisterium' of the experts, of the intellectuals."

"Exegetical" means "explanatory," and "magisterium" means "teaching authority, especially of the Catholic Church." The meanings of these words are implicit in Cardinal Ratzinger's prose, beautifully translated as it is, and I only used a dictionary to be sure that my reading was absolutely correct for this review.

My recommendation of this book extends not only to Catholics, but to all Christians.
Read more
4 people found this helpful
Report abuse
See all reviews
Fast, FREE delivery, video streaming, music, and much more
Prime members enjoy Free Two-Day Shipping, Free Same-Day or One-Day Delivery to select areas, Prime Video, Prime Music, Prime Reading, and more.
> Get started
Back to top
Get to Know Us
Make Money with Us
Amazon Payment Products
Let Us Help You
EnglishChoose a language for shopping. CanadaChoose a country/region for shopping.
© 2008-2021, Amazon.com, Inc. or its affiliates