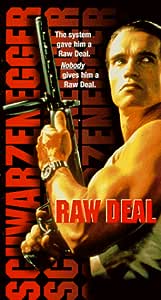 Arnold Schwarzenegger (Actor), Kathryn Harrold (Actor), John Irvin (Director) & 0 more Format: VHS Tape
4.5 out of 5 stars 482 ratings
Secure transaction
Returns Policy
Your transaction is secure
We work hard to protect your security and privacy. Our payment security system encrypts your information during transmission. We don’t share your credit card details with third-party sellers, and we don’t sell your information to others.

A by-the-numbers action flick featuring a stern Arnold Schwarzenegger, Raw Deal has all the traditional traits of the genre. Schwarzenegger is a disgraced former FBI agent who winds up as sheriff of a backwater Southern town. He is given a chance to reclaim his job when the head of the Bureau offers him reinstatement if he'll go undercover to capture the mob boss responsible for killing his son. Schwarzenegger must get close enough to gain the trust of the gangster without being discovered as a mole, while gathering enough evidence to take him down. One of Schwarzenegger's early films, in which he honed his persona, Raw Deal offers up the usual quotient of gun battles and tough talk, with a trace of self-deprecating humor from its star, making it reasonably worthwhile entertainment. --Robert Lane

4.5 out of 5 stars
4.5 out of 5
482 global ratings
How are ratings calculated?
To calculate the overall star rating and percentage breakdown by star, we don’t use a simple average. Instead, our system considers things like how recent a review is and if the reviewer bought the item on Amazon. It also analyzes reviews to verify trustworthiness.
Top reviews

Joseph Domenic Marc Vaccaro
5.0 out of 5 stars Works with normal bluray player.
Reviewed in Canada on July 4, 2019
Verified Purchase
Movie sucks but it's fascinating. Bluray is awesome. Euro packaging. Totally works on normie Canadian bluray player. Needed this one to fill out my Arnie stuff and I was pleased at the humorous extras and the THICK case.
Read more
Helpful
Report abuse

tyler pawlyshyn
5.0 out of 5 stars A+
Reviewed in Canada on June 26, 2019
Verified Purchase
It’s exactly what it’s supposed to be. So that’s good.
Read more
Helpful
Report abuse

Louise O'Neill
5.0 out of 5 stars Five Stars
Reviewed in Canada on March 23, 2017
Verified Purchase
Life would not be the same without Arnie!
Read more
Helpful
Report abuse

jerry
1.0 out of 5 stars Good movie
Reviewed in Canada on December 31, 2016
Verified Purchase
Can not use DVD in our player should have mentioned it was for a different zone
Read more
Helpful
Report abuse

Tim Janson
3.0 out of 5 stars Not one of Arnold's better Efforts
Reviewed in Canada on January 27, 2004
Raw Deal was one of Arnold Schwarzenegger's earliest movies and it shows. He was particularly stiff and didn't seem entire comfortable or believable in his role as an Ex-FBI agent brought back in by his old boss (Darren McGavin) to take down a mob boss in Chicago.
Built from the same cookie cutter formula as Commando, Raw Deal is unapologetic brain-in-neutral action cheese. The acting is irrelevant; the dialogue is irrelevant... all that matters is the action, translated as the fact of a fistfight, chase sequence, and/or gun battle every few minutes. It doesn't even really matter why everyone's fighting, just as long as they do in fact fight and the audience is able to tell the good guys from the bad guys.
Robert Davi plays the mob boss' second in command and as usual, brings a strong villianous edge to his role. He doesn't trust Arnold who is undercover as an up and coming Mob hood.
Schwarzenegger is truly in his element here, falling easily into the generic stereotype role that can best be described as "another muscular hero played by Arnold". He wears the part like a glove, and he's smart enough to know that the movie he's making is "B" grade cheese, a fact that he runs with when delivering his dialogue with an implied wink. One scene in particular comes to mind where he's about to drive a tow truck into a restaurant window, and he politely asks the people standing near the truck "Excuse me, but could you move to the side a little bit?" His method of delivery is dead on; it's plain to see that Arnold has a full grasp on the comedic elements afforded by the script and that he's having a good time. "You should not drink and bake" is another wonderfully delivered side-splitter, though nothing tops the tip o' the hat query of "Who do you think I look like? Dirty Harry?"
All in all, pretty mindless, but harmless popcorn fun.

BITW91
5.0 out of 5 stars Schwarzenegger gets his Raw Deal
Reviewed in the United Kingdom on August 7, 2017
Verified Purchase
I've never watched this movie from start to finish, now I have. Arnold Schwarzenegger has always been a hero of mine and this 80's movie does the job it always delivers. A lot of great action and sequences, making it into a fast paced action film.
Read more
2 people found this helpful
Report abuse

pez
5.0 out of 5 stars Five Stars
Reviewed in the United Kingdom on May 5, 2018
Verified Purchase
Schwarzenegger undercover as mobster loads of action arnie at is best
Read more
One person found this helpful
Report abuse

sharon thomas
5.0 out of 5 stars Dvd
Reviewed in the United Kingdom on September 12, 2018
Verified Purchase
Film i was looking for
Read more
One person found this helpful
Report abuse

Omar Sharif
5.0 out of 5 stars Great movie and recommended..👌
Reviewed in the United Kingdom on October 14, 2020
Verified Purchase
Great movie and recommended.. 👌
Read more
Report abuse
See all reviews
Fast, FREE delivery, video streaming, music, and much more
Prime members enjoy Free Two-Day Shipping, Free Same-Day or One-Day Delivery to select areas, Prime Video, Prime Music, Prime Reading, and more.
> Get started
Back to top
Get to Know Us
Make Money with Us
Amazon Payment Products
Let Us Help You
EnglishChoose a language for shopping. CanadaChoose a country/region for shopping.
© 2008-2021, Amazon.com, Inc. or its affiliates