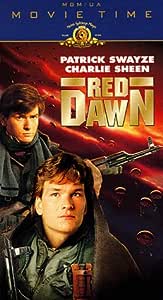 Truly ridiculous but somehow moving, this right-wing paranoid fantasy by John Milius (The Wind and the Lion) from 1984 concerns a Soviet takeover of the United States and a band of ragtag adolescents who metamorphose into freedom fighters. One can laugh at the notion of Nicaraguans, Cubans, and Russians having worked out a master plan to invade America, but Milius's account of how such a grim day affects a small Western town really does get under one's skin. The cast--most of whom were not yet stars (Patrick Swayze and Jennifer Grey had probably never heard of a script called Dirty Dancing at the time)--are quite persuasive as nice kids who come to recognize the tragedy of their lost innocence through fierce, uncompromising struggle. Powers Boothe is very good as a pilot who briefly comes to their aid, and Harry Dean Stanton is stirring as a solid working man and father who represents the virtues his sons are fighting for. The DVD release includes production notes, the original theatrical trailer, trivia, scene access, and an optional widescreen presentation. --Tom Keogh

4.7 out of 5 stars
4.7 out of 5
1,260 global ratings
How are ratings calculated?
To calculate the overall star rating and percentage breakdown by star, we don’t use a simple average. Instead, our system considers things like how recent a review is and if the reviewer bought the item on Amazon. It also analyzes reviews to verify trustworthiness.
Top reviews

Mohawk Professional
4.0 out of 5 stars WORTH WATCHING
Reviewed in Canada on August 2, 2020
Verified Purchase
I had seen this many many years ago and decided to buy to see the late Patrick Swayze. The movie was good until the end. I prefer happy endings so that's why I gave it only a 4. The theme of warrior teenagers and their story was well done. Patrick Swayze who did a great acting job as well as the other actors. Worth watching. I do not want to spoil the ending for future viewers so no further comments.
Read more
Helpful
Comment Report abuse

BruceB
4.0 out of 5 stars An interesting watch
Reviewed in the United Kingdom on May 19, 2017
Verified Purchase
It's a good film on several levels.
First, as a look back to see actors who later became major stars. Second, to see such a film made in pre-CGI days. I haven't seen the re-make, but so many films today feature really ridiculous numbers of people in computer-generated battlefield encounters. This film went the other way, with seemingly, a dozen or so parachutists being a major invasion force. If I were invading the US, naturally I'd take out a school first.
Film quality wasn't up to today's standards of course, but was very acceptable. Sadly the 4:3 format hadn't been well converted to wide screen and Swayze and others looked a tad squashed in the process.
The proposition that such a small group of young people could wage such effective guerrilla war is far-fetched, but to enjoy this story, you need to suspend reality. The acting was pretty good.
In summary, with some flaws, it still stands above so many films that are produced today. Worth a watch.

Alan
5.0 out of 5 stars Red Dawn version comparison
Reviewed in the United Kingdom on August 1, 2018
Verified Purchase
Bought both versions, so that I could compare them. I must say I really preferred this version rather than the Chris Hemsworth version. The newer version is more up to date with North Korea as the villians of the peace but sadly it just does not cut it.
Read more
One person found this helpful
Report abuse

Vasquez
5.0 out of 5 stars 80's paranoia
Reviewed in the United Kingdom on October 20, 2012
Verified Purchase
I could vaguely remember this film from my youth, so I thought why not at the price. It was everything I remember, cheesy acting, Soviet paranoia,American Bravery winning out.
It is a thoroughly enjoyable romp, The plot of a Soviet/Cuban? attack on the US is so far fetched, but America at the time would have believed it possible. Has anyone seen Doomsday Preppers on NatGeo, that lets you know what the state of mind of some US citizens is today.
What bothers me is I cannot place the Russian villain, he was in loads in the 80's and always a bad guy.
WOLVERINES!!!!!! Got to love it.
Read more
3 people found this helpful
Report abuse

Richard
5.0 out of 5 stars GOOD.
Reviewed in the United Kingdom on April 10, 2017
Verified Purchase
GOOD film to see made in 1984 but this is still the best with who is in the film and a lot better than the bs remake with North Korea. Thank you.
Read more
Report abuse

Amy
5.0 out of 5 stars Love this Film
Reviewed in the United Kingdom on February 1, 2016
Verified Purchase
I love this Film.. Although it is a little darker that the new Chris Hemsworth version but I love the oldies..
This film was great value, fast delivery and in great condition - Many thanks
Read more
One person found this helpful
Report abuse
See all reviews
Fast, FREE delivery, video streaming, music, and much more
Prime members enjoy Free Two-Day Shipping, Free Same-Day or One-Day Delivery to select areas, Prime Video, Prime Music, Prime Reading, and more.
> Get started
Back to top
Get to Know Us
Make Money with Us
Amazon Payment Products
Let Us Help You
EnglishChoose a language for shopping. CanadaChoose a country/region for shopping.
© 2008-2020, Amazon.com, Inc. or its affiliates