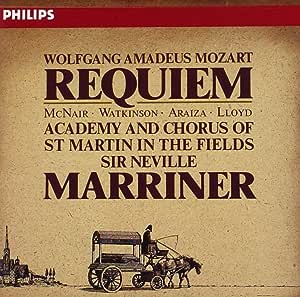 This recording of the Süssmayr completion of Mozart's beloved Requiem remains one of the most interpretively faithful and musically satisfying versions in the catalog. Sir Neville Marriner, whose contribution to the soundtrack of the film Amadeus helped launch a worldwide Mozart revival, delivers Mozart's inspired music with a masterful command of style and substance. He's not trying to prove anything, but rather lets the music deliver its own profound and moving messages. --David Vernier

4.6 out of 5 stars
4.6 out of 5
105 global ratings
How are ratings calculated?
To calculate the overall star rating and percentage breakdown by star, we don’t use a simple average. Instead, our system considers things like how recent a review is and if the reviewer bought the item on Amazon. It also analyzes reviews to verify trustworthiness.
Top reviews

Nana
5.0 out of 5 stars Another beautiful piece of music from Mozart
Reviewed in Canada on May 24, 2014
Verified Purchase
This is an excellent recording both on the part of the orchestra and the wonderful choir, one that will be enjoyed many times over.
Read more
Helpful
Comment Report abuse

R. Gerard
5.0 out of 5 stars The Finest Requiem Available
Reviewed in Canada on October 30, 2002
This is undoubtedly the finest recording of Mozart's Requiem I've heard. Having owned several recordings of the Requiem Mass, each having its own distinct style (Karajan, Hogwood, Pearlman, Spering, Christie, Solti) this release by Sir Neville Marriner outstands them all.
It's a wonderfully dramatic recording. This comes from the same conductor who recorded the soundtrack to Amadeus, of course. It is also a dark sounding record, while most the period-instrument recordings available of KV. 626 are rather light, airy, and superficial for a death mass. While this may be a powerful modern-instrument rendition, it is not a romanticized as Karajan's, which is a good thing.
The soloists are first rate. McNair's voice is perfect in intoning the "Te Decet" with her explicit calmness, yet tacit darkness and tension that you cannot get from Monica Groop, Ruth Ziesak, or Emma Kirkby.
The conducting is careful and the tempi are perfect. You never need to worry about Marriner going to slow as other modern-instrument conductors do. I have never heard a "Recordare" more radiantly executed, or a "Kyrie" with such driving force, or even a technically challenging movement such as the "Domine Jesu" handled with such precision.
The choir is also the strongest choir I've heard sing Mozart's Requiem. This chorus can invoke fear, while other choirs sound either too large or too amateurish for such a piece.
Regarding sound quality, I have never had a problem with the sound as it sound just a beautiful as any other record in my collection. Maybe it is the resonance of the record, but it does definitely give the record the sound of a large church interior, which is quite appropriate for the music. Although this recording does NOT seem to have any sound or noise deficiencies.

Wes N
5.0 out of 5 stars Jumpin Jehosaphat!
Reviewed in Canada on January 9, 2002
I'll be darned if this isn't one of the finest CDs I've ever heard. I must be honest - I am a big Mozart fan and had never heard of Sir Neville Mariner. I know, I know, 'How can you call yourself a Mozart fan if you've never heard of Sir Neville Mariner?' Well in retrospect, I suppose I wasn't a *true* Mozart fan until I stumbled across this CD.
Anywho, on with the review.
The Academy of St. Martin-in-the-fields Choir is astounding. And with the good Sir Mariner at the head, they can do no wrong. Their performance is impeccable from the slow dark tones of Tuba Mirum to the powerful Rex Tremendae, and everywhere in between.
This is not one of those "good for any kind of mood" pieces of music. If you're willing to sit down and listen to the musicality of it all, it will lift your spirits like nothing else. If however, you listen "superficially," odds are it will either depress the heck out of you or perpetuate your current ill state of mind.
Don't get me wrong! This is some of the best music in the world! But you must bear in mind that it is a Requiem mass - a mass for dead people. It's fantastic music, but not "happy" music.
All in all, this is just about as good as it gets. If you like classical music, and don't already have this recording of this piece, don't leave your seat until you order it. For everyone else, that goes for you, too. I mean that! I want you to have this CD!
Read more
One person found this helpful
Helpful
Comment Report abuse

Russ
5.0 out of 5 stars Excellent Recording in the Marriner Style
Reviewed in Canada on January 30, 2003
I own 4 recordings of Mozart's Requiem, and this one is one of my favorites. Marriner's version is brighter and quicker than the others I have, giving it more energy. It does have a darker feel in places, as it should being a requiem. For a truely dark rendition, I would have to recommend Karajan.
The sound quality of the recording is excellent (DDD). I found myself wishing for more from the tenors in a few places, but that is simply a matter of taste.
Read more
One person found this helpful
Helpful
Comment Report abuse

Cathy
5.0 out of 5 stars An Absolutely Magnificent Rendition
Reviewed in Canada on July 7, 2003
This is by far the best recording of the Requiem available. Marriner's tempi are perfect: slow enough for expression, but fast enough to hold interest. Unlike most other recordings, it doesn't drag...but it's also not so fast that everything whooshes by. The orchestra and choir are perfectly balanced...neither one is overpowering. Usually the choir sounds like a bunch of separate groups of singers all recorded separately. In this recording each voice in the choir is heard equally, and therefore sounds like a unit. The soloists are first-class, and their voices blend magnificently. McNair...an angel; she has the most beautiful soprano voice I have ever heard. This cd is almost worth buying just for her breathtaking solo in Tuba Mirum. If you have only one recording of the Requiem, this should be it. It's worth every cent.
Read more
One person found this helpful
Helpful
Comment Report abuse

Mary C. Carlock
1.0 out of 5 stars Lacks both power and style.
Reviewed in Canada on January 16, 2002
I borrowed this recording from a friend years ago, when I was new to classical music, and I loved it. I bought it a few weeks ago from this site, expecting it to seem the same as when I was less experienced. When I listened to it, it hit me. I knew that this recording of Mozart's Requiem is dull compared to the other recordings available. The sound quality of this recording is horrible beyond the music! The soloists are not by any means world class; I could practically fall asleep from the condensed voice of Gerd Nienstendt. Furthermore, the whole choir lacks the power which you would expect from a work like this. This is great music, but a poor version of it. The only up side to this recording is the instrumentals which attempt to patch up the choir. Experienced listeners are advised to look at better recordings.
Read more
2 people found this helpful
Helpful
Comment Report abuse

Ken Showman
5.0 out of 5 stars Beautiful recording of a beautiful piece
Reviewed in Canada on April 18, 2000
Of the 3 performances of Mozart's Requiem that I own, this one is my favorite. It's full of energy in all the right places, and really appropriately depressing in all the right places. I've never noticed any problem with the recording quality (and I hope I don't start listening for one now!), although I don't pretend to be an expert.
Read more
Helpful
Comment Report abuse
See all reviews

Mark Gagan
5.0 out of 5 stars But this one
Reviewed in the United Kingdom on September 15, 2019
Verified Purchase
It’s the best-no need to buy any other.
Read more
Report abuse

Lawrence Chen
5.0 out of 5 stars Great recording
Reviewed in Australia on October 18, 2018
Verified Purchase
Marriner is one of my favourite conductors. I am interested in this version of Mozart requiem is because I watched the movie “Amadeus “ a few years ago. This movie’s music is directed by Marriner as well. I am quite obsessed by the requiem section as a background music in the movie which comes to the end of mozart’s life. It reminds me of the scene in this great movie
Read more
Report abuse