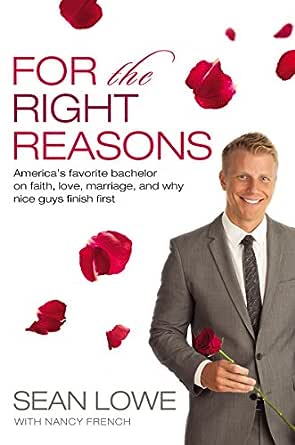 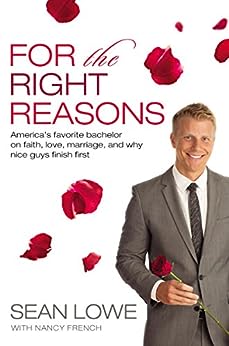 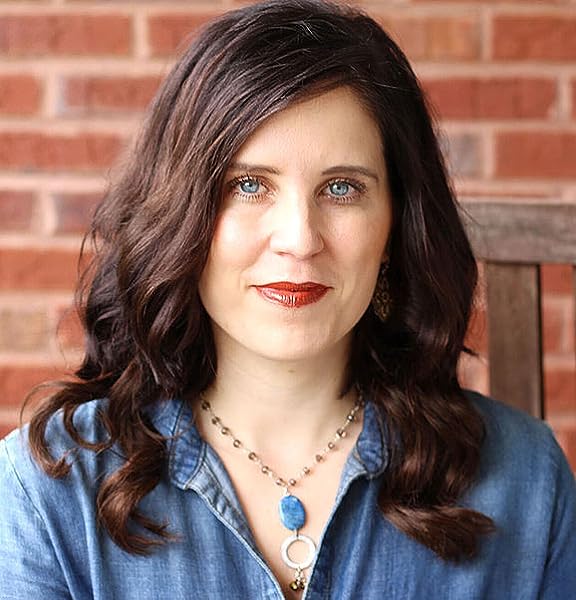 Sean Lowe, one of the three finalists on Emily Maynard’s popular season of The Bachelorette, later starred in the 2013 season of The Bachelor. Credited by the New York Times for “reinvigorating the franchise,” he has been voted America’s favorite Bachelor and is the only one to marry his match from the show. Sean and his bride, Catherine , live in Dallas, Texas, with their two dogs, Ellie and Lola.

--This text refers to the hardcover edition.

4.6 out of 5 stars
4.6 out of 5
258 global ratings
How are ratings calculated?
To calculate the overall star rating and percentage breakdown by star, we don’t use a simple average. Instead, our system considers things like how recent a review is and if the reviewer bought the item on Amazon. It also analyzes reviews to verify trustworthiness.
Top reviews

Christine H
5.0 out of 5 stars Bachelor Fan = You'll Like This Book
Reviewed in Canada on July 16, 2015
Verified Purchase
I love the Bachelor/ette and kept seeing photos of this book posted on Twitter so I finally decided to buy it. Once I started to read it I couldn't stop and it was an interesting read. I wondered if by chance I was going to find the religion to be too much in this book however it was a nice balance and wasn't overly done. Towards the end portion of the book when the review of the end of his season was being done, it was a bit repetitive considering most of us probably watched the season already but still interesting to relive. All together this book was a great read and I would recommend it if you watched the season or like the Bachelor/ette!
Read more
One person found this helpful
Helpful
Comment Report abuse

Carol
5.0 out of 5 stars Interesting book
Reviewed in Canada on May 9, 2017
Verified Purchase
Only half way through but the book talks about the Bachelor/Bachelorette experience. It is NOT at all trashy and does not go into great personal or intimate details. The other 2 books I have read from the contestants, cross too many personal boundaries that made me uncomfortable. I would not hesitate to let my teenage daughter read this book.
Read more
Helpful
Comment Report abuse

Amazon Customer
5.0 out of 5 stars An interesting book
Reviewed in Canada on May 10, 2019
Verified Purchase
I enjoyed reading this book that gave insight into Sean Lowe"s background and the choices he had to make on the show "The Bachelor". I appreciated his openness and honesty in sharing his story.
Read more
Helpful
Comment Report abuse

Arrianan Mall
5.0 out of 5 stars 5 stars!
Reviewed in Canada on February 1, 2015
Verified Purchase
So authentic, honest and poignant memoir. A lifetime of marital bliss for you and Catherine! May God shower you both of blessings and God-fearing children!
Read more
Helpful
Comment Report abuse

Ian Affleck
5.0 out of 5 stars Five Stars
Reviewed in Canada on March 21, 2016
Verified Purchase
Couldn't put it down and, when I was done, I wanted more.
Read more
Helpful
Comment Report abuse

Susan Murtha
5.0 out of 5 stars This is a great book!
Reviewed in Canada on January 28, 2015
I loved everything about it - Sean's growing up years, his faith journey, the behind the scenes from the bachelor filming. It is an honest and inspiring book.
Read more
Helpful
Comment Report abuse

Alex C
5.0 out of 5 stars Insightful and honest story
Reviewed in the United Kingdom on April 16, 2016
Verified Purchase
I absolutely fell in love with Sean and Catherine's love story as I watched it unfold on the Bachelor (2-3 years later) on an English TV channel ITVBe. Watching this season of the Bachelor was an undeniable guilty pleasure of mines. I actually watched Emily's season first, where Emily failed to see how wonderful Sean was, but I totally believe in hindsight this happened for the right reasons!! I'll be honest, although I watched Emily's season and she seemed cool, I wasn't really moved by the season and I knew that her and Jeff would sadly not last (but I'm happy she's also found her happy ending). As a Londoner, I specifically remember the episode where Sean declared his thoughts on love at Hyde Park Speakers' Corner in London. I also remember him running through Prague to find Emily, which I thought was sweet but equally comical to watch. However, I was most touched by Sean's admission to the camera, when he was let go by Emily. I felt like what he said to the cameras was so sincere that it moved me. I was therefore very excited that he would be the next Bachelor, and I made sure I set my Sky TV to record this season of the Bachelor, which aired just before Xmas 2015 and in the new year of 2016. It was also come on quite late on TV so I had to record it.

My new found joy in watching this season of the show was apparent, my sister and good friends were quite skeptical when I talked about how wonderful Sean and Catherine's love story was (not surprising though as it took 17 seasons to get a wonderful Bachelor like Sean who was committed to finding his wife!) I am not an avid user of social media sites, but I knew Sean chose Catherine. When watching the show, it was clear that Sean and Catherine's love developed each week. I knew he was definitely falling for her, and she was equally falling for him, during their first whole day date in Thailand when there were 3 girls left. There were so many intense and moving moments on that date that it was clear that the other girls didn't stand a chance. I loved reading Sean's book, because it confirmed my suspicions here.... I think those who were rooting for Lindsay (who is definitely a sweet girl and I'm happy she got her happy ending) were clearly not watching the show properly or observing Sean's interactions with Catherine in comparison to the other girls. I'll admit that there were a few moments between them that made me teary, such as when he said "I think you're stunning"!!

All in all, if you want an insight into Sean's mind and heart as he went through the Bachelor and Bachelorette process then read this book. What I love most about this book is Sean's honesty about the fact that he's not a perfect guy, and he's made some mistakes, but what counts is how you come back from those mistakes and the lessons you learn. I absolutely love his Christian faith and spirituality, which reminds me a little of my own. I also read the "word for the day" books (and I have the bible apps on my smartphone so I can read the word on my daily commute in London). This book was a great way to end my personal love affair with the Bachelor.

I wish Catherine and Sean lots of happiness in their marriage (which was beautiful to watch and I loved BOTH of their vowels- their wedding definitely had me in tears of joy for the couple). I'm sure they're going to make wonderful parents. I also love his sister Shay (congrats on her success with her cooking and/or baking book) and her husband Andrew- their story is awesome too, as well as their resilience in the face of fertility issues. Thanks to all of the Lowes for giving us an insight into your lives. As I said before, I'm not much of a social media person (too busy "lawyer-ing") so I won't follow you on the latest social media websites, but you have a fan in London (probably for life)! You make me believe that my guy exists somewhere in this big world too :-)

p.s.I was sad that the book is quite expensive to purchase in the UK- I don't believe I've paid more than £10.00 for a book in over a decade, so I ordered my copy from Canada to ensure I purchased the book at a reasonable price. Delivery took a little long but it was well worth the wait- I was soooo happy when it arrived!

Sabrina Kapur
3.0 out of 5 stars Preferred Sean on screen rather than in print
Reviewed in the United Kingdom on October 14, 2019
Verified Purchase
I love the bachelor and heard plenty about Seans season, with all of the publicity he has received! I bought his book because of my love of the show but the book did not meet my expectations. Having read the book I did watch Sean's season which was a lot more entertaining than the book.
Read more
Report abuse

Emma Whitehurst
5.0 out of 5 stars Fabulous, honest account from a genuine guy.
Reviewed in the United Kingdom on January 28, 2016
Verified Purchase
Loved this book, read it within a couple of days. Sean Lowe gives an honest and refreshing account of his life so far and the process of being the bachelor whilst remaining faithful to his beliefs. I wish he'd do a second book as I'd love to read more of his work.
Read more
Report abuse