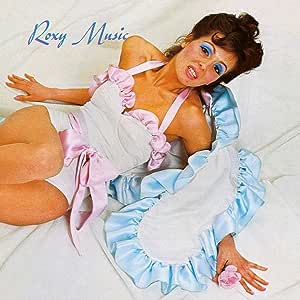 Add to Cart
CDN$ 181.75
And FREE shipping on eligible orders. Details
Sold by: We Won't Be Beat
Have one to sell?
Sell on Amazon

Roxy Music’s ground-breaking debut album is expanded in an exclusive super-deluxe package featuring rare and previously unavailable material. It represents the first time Roxy Music’s archives have been opened, offering rare and genuinely never-heard-before material outside Roxy’s inner circle. Compiled with the group’s involvement, the 3CD / DVD 12” X 12” box set includes the original album including ‘Virginia Plain’, the demo tape that led to their first record deal plus the legendary BBC Sessions that saw the group hone their craft. There’s also an entire disc, exclusive to this format, of previously unheard studio outtakes prepared exclusively by Bryan Ferry and producer Rhett Davies including alternate session versions for every album track and ‘Virginia Plain’.

4.6 out of 5 stars
4.6 out of 5
83 global ratings
How are ratings calculated?
To calculate the overall star rating and percentage breakdown by star, we don’t use a simple average. Instead, our system considers things like how recent a review is and if the reviewer bought the item on Amazon. It also analyzes reviews to verify trustworthiness.
Top reviews

Stephen Bieth
TOP 1000 REVIEWER
5.0 out of 5 stars Five Star Box Set For Five Star Record!!
Reviewed in Canada on February 2, 2018
Verified Purchase
After literally years of waiting the Roxy Music debut album box set comes out. Unfortunately my surround receiver is in the shop so I can’t comment on the 5.1 yet, but the rest of the set is great. Nice mastering and the BBC disc (clocking in at just under 75 minutes) is worth grabbing the box set for alone. The demos disc is solid. A little bit more for us Roxy diehards then the casual fan. The packaging is gorgeous, a hard case that houses a hard cover coffee table book on the history and making of the album. Lots of text and beautiful photos. What I can tell you about the 5.1 is it was done by the king of 5.1 Steven Wilson and he has done the second album as well. So hopefully next year another box? (5.1 is excellent, another feather in Wilson’s hat. First thing I listened to after getting my receiver back)
This is one of my all time favourite records so I might be a little biased, but I feel this set was definitely worth the $119 I paid for it.
Read more
2 people found this helpful
Helpful
Comment Report abuse

Hal9001
4.0 out of 5 stars Re-Master/Re-Purchase
Reviewed in Canada on February 6, 2018
Verified Purchase
The package is very nice, the book is pure eye candy, the bonus audio content is good (I also own the 2012 box set and prefer the warmer flat transfer of the album in question, the one included in the set is the brighter 1999 remaster), the 5.1 mix sounds great and a main reason for picking this up, the DVD has some very cool video performances on it... and Eno! I grabbed an early pre-order so the price wasn't as high as it is now, though I still feel like this release was over priced, and when added to the fact the main album is the 1999 remaster I'm removing a star from an otherwise overall nice release.
Read more
2 people found this helpful
Helpful
Comment Report abuse

alx7
5.0 out of 5 stars A Gem
Reviewed in Canada on March 1, 2018
Verified Purchase
Quality set...a gem! The SW 5.1 is magnificent.What a pleasure! The instrument separation in the room is excellent. Wow! It's the best! I don't know what more I could ask for (7.1?). Love the videos as is (they are old tech). This is just an absolute great sounding album...
The book is perfectly wonderful and high quality. Lots of outstanding pictures. The CDs are great too.The BBC Sessions, the Demos & Out-takes sound really good. I have this...and i like this record better now than before. This is a must buy. If you don't this band...you will.
Read more
One person found this helpful
Helpful
Comment Report abuse

Stuart Bayens
5.0 out of 5 stars A must-buy for fans
Reviewed in Canada on February 20, 2020
Verified Purchase
Nice to have this groundbreaking album served up in such a nice package and the extras are superb. The re-mixing and remastering is spectacular considering the source material is 50 years old. We will never their like again.
Read more
Helpful
Comment Report abuse

d.r. johnston
5.0 out of 5 stars A must for devotees
Reviewed in Canada on February 20, 2018
Verified Purchase
A phenomenal package. The 5.1 mix exceeded my expectations. The essays and information filled in a lot of gaps in my knowledge as a longtime fan. Many photos I had never seen.
Read more
Helpful
Comment Report abuse

Pell Mell
3.0 out of 5 stars An interesting rip off
Reviewed in the United Kingdom on October 28, 2019
Verified Purchase
For starters the proper album is a 5* classic. But we all already own the album, possibly in multiple formats.
The book is an interesting flick through with some fabulous pictures but the keen Roxy fan won’t learn much new.

I bought the deluxe box mainly for the videos which shows Roxy in all their early finery and show that Eno spent his time just moving one lever on the synthesizer. You will watch it once. You may listen to the alternative mixes of the album on the DVD but I doubt it.

The early demo versions of the songs and the out-takes are interesting if only because it’s amazing something so startling eventually came from them. You may listen to this twice, the second time with some fast forwarding.

This leaves the live cuts. Again very interesting and better than the early studio cuts but irritating because the bits you really like are often missing. But you might play this a few times.

As other reviews say, it really is one almighty rip off.
Read more
5 people found this helpful
Report abuse

D. J. Mcsorley
5.0 out of 5 stars Time to buy
Reviewed in the United Kingdom on May 4, 2018
Verified Purchase
At £130 I was never going to be able to justify this purchase to myself.......at £55 I was prepared to stretch, and I'm so glad I did.
Steve Wilson's 5.1 mix is awesome.
It should be avaiable as a stand alone disc. However fleecing 5.1 music fans is very much the order of the day with this kind of release today.
The box set is lavishly and substantially presented. Impressive but not really necessary- I would have prefered something flimsier and less expensive.
However at £55 this is definitely worthwhile ...if hardly a bargain.
Its time to immerse yourself in Roxy Music!
Read more
12 people found this helpful
Report abuse

Gary Ashton
5.0 out of 5 stars For the fans Pleasure....
Reviewed in the United Kingdom on May 28, 2018
Verified Purchase
This is a beautifully presented box set of a groundbreaking album.People of a certain age will never forget the first time they saw Roxy on Top Of The Pops and probably asked themselves who is this band and just what sort of sounds are they making ?.......well with this box set, just listen to Steven Wilson’s 5.1 mix to discover even more sounds than we first heard all those years ago.....the original album, the live cd,the demos and the dvd with the SW mix are just superb and the book is a great read and well presented treasure trove of a time when we all waited to see who was on TOTP and who featured in NME and Sounds each week.
The current price (£55) makes this a must buy for all fans of this amazing band....just buy it, for your pleasure....
Read more
One person found this helpful
Report abuse

Ian Stewart
4.0 out of 5 stars Never mind the daft price, enjoy the contents
Reviewed in the United Kingdom on May 26, 2018
Verified Purchase
This is a terrific treat if you are a Roxy Music fan - you get to hear BBC sessions that you probably had on bootleg in perfect quality, there's a lovely and informative book, there's a plethora of pics of Keri-Ann Muller to admire, there's a very sympathetic 5.1 and there is the original demo that they recorded and used to sell the band to various management and record companies. All great stuff. Downside? Well even at £55 the price is toppish - the original asking price was simply exploitative - and the remaster of the actual album is something you'll already have if you are springing for this I presume. So, not five stars, but definitely four - if only for those pictures of Keri-Ann! ;-)
Read more
One person found this helpful
Report abuse
See all reviews
Pages with related products. See and discover other items: coffee candy, Coffee Candies, coffee mix, roxy hat
Fast, FREE delivery, video streaming, music, and much more
Prime members enjoy Free Two-Day Shipping, Free Same-Day or One-Day Delivery to select areas, Prime Video, Prime Music, Prime Reading, and more.
> Get started
Back to top
Get to Know Us
Make Money with Us
Amazon Payment Products
Let Us Help You
EnglishChoose a language for shopping. CanadaChoose a country/region for shopping.
© 2008-2020, Amazon.com, Inc. or its affiliates